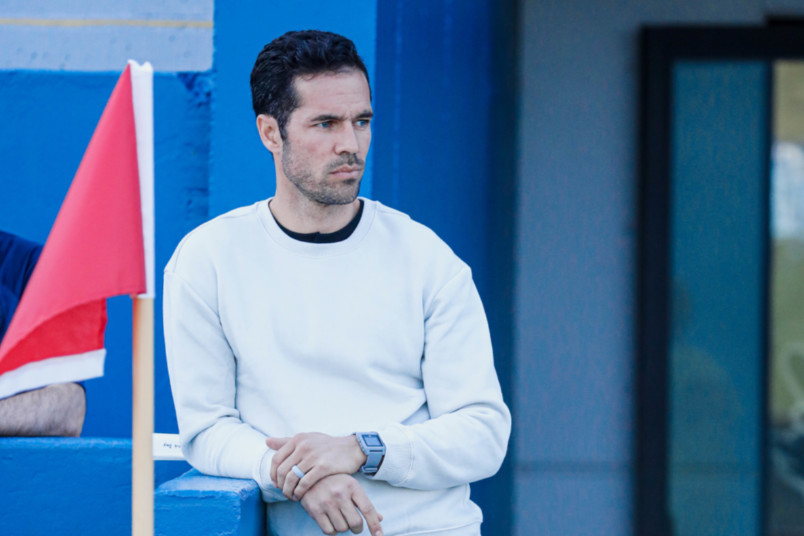 By Jason Davis – WASHINGTON, DC (Aug 19, 2022) US Soccer Players – Benny Feilhaber’s club career spanned 15 seasons and more than 300 games played in four different countries. The versatile, attack-minded midfielder earned his way into the USMNT and played 44 for the Red, White, and Blue. He scored the famous winner against Mexico in the 2007 Gold Cup final and went to the World Cup under Bob Bradley in 2010.

During a nine-year run in Major League Soccer that included stops in New England, Kansas City, Los Angeles, Colorado, and Kansas City again before he hung up his cleats, Feilhaber made an MLS Best XI (2015) and lifted the MLS Cup trophy with Sporting in 2013. Recognized as one of the best creative American players of his generation, it was clear when Feilhaber retired at 34 that he had plenty to offer the game off the field.

Feilhaber found his calling in coaching. A stint as an assistant at his alma mater, UCLA, led to a return to Kansas City to work in the Sporting Kansas City organization. When the club moved its reserve team to MLS Next Pro for that league’s inaugural season this year, Feilhaber jumped at the chance to serve as its head coach.

To hear Feilhaber tell it, his first year as a head coach has been a strange mix of learning the coaching craft and dealing with things he knew were coming but still wasn’t quite ready for.

“It’s been a really good experience so far,” Feilhaber told US Soccer Players. “The understanding of what the level is going to be like, the obvious challenges within our own organization where you have to deal with the movement of players, the first-team to second-team, academy kits coming up, and the integration of players and building chemistry within the team. It has been kind of expected to some extent, but also almost unexpected, expected. Where you kind of know there are going to be some things that you don’t really expect, but you’re expecting it.”

Balancing the ins and outs of a second team is a major part of the job for Feilhaber. Sporting Kansas City II wants to be competitive within MLS Next Pro, but the focus can be muddy at times. There are occasions when just fielding a consistent lineup can be difficult.

“It’s been very, very good for my own coaching experience. Improving and being able to create relationships with players and kind of understand how everybody ticks and how to get the best out of everybody,” Feilhaber explained.

“It’s an environment where you have certain second team contracted players that potentially might be training and then all of a sudden the first team guy comes in and takes some minutes away. To be able to juggle all of that and kind of maintain the competitiveness of the group and still continue to develop certain players for the first team has been the challenge.”

Feilhaber’s mentor in Kansas City is a man who knows a thing or two about coaching at the top level in American soccer: Peter Vermes. The relationship is still evolving with Feilhaber as the second team coach, but the man who played under Vermes for six seasons appreciates that the Sporting boss is letting him grow into the role.

“The communication with the first team is very consistent, very constant.” Feilhaber related. “(Vermes) is letting me make my own decisions and mistakes while I’m learning with the second team. It’s been the best of both worlds for me. I’m sure that as I grow into being my own coach, there’ll also be some more parameters as we kind of go through. But I think this first year, Peter’s in a very tactical way, is letting me do my own thing so I can figure it out. Peter has been very hands-off this first year. I think he’s done it on purpose so that I kind of learn from my own mistakes and not be worried about pleasing anybody or want or any kind of going in someone else’s direction.”

But that freedom only goes so far. Sporting is a club molded by Vermes and SKC II feeds into a bigger plan. The type of soccer SKC plays flows from the head coach of the first team down the organization and into Feilhaber’s work with the reserve side. There’s a difference in the quality and experience of the players which makes it more challenging to play Sporting soccer, but Feilhaber is positive about the work he’s doing.

“We have a very clear idea of what we want (the team’s play) to look like. I think anyone that’s watched enough MLS over the last ten, 15 years knows the kind of team that Peter puts out there,” Feilhaber explained. “We want to try and replicate that. I’ve definitely seen some things that have worked, some things that haven’t worked. I’ve played with certain ideas to try and get the greater good in terms of the developmental part of what we want to eventually achieve for guys that are going on to the first team.”

One can only imagine the temptation for Feilhaber and his assistant coach, former MLS Defender of the Year and fellow US international Ike Opara, to jump into training with the players. Both are only a few years removed from their playing days and are still fighting the urge to participate. The hands-on approach can also provide a unique perspective.

“I try to stay out of training as much as possible,” Feilhaber said with a chuckle. “There are times when it makes sense to jump in. One thing that we’ve noticed with the few times that we’ve jumped in is you can learn a few things about the player when you’re actually playing with them, when it’s harder to see from the sidelines and so good or bad. ”

The relationship between Feilhaber and Opara developed during their playing days and helped spawn an insider’s look at the sport through the popular “BSI Podcast”. Now working together as coaches, Feilhaber sees the dynamic as perfect for Sporting Kansas City II. Opara handles much of the defensive part of the field, allowing Feilhaber to focus on the attack.

“That’s been very natural,” Feilhaber said of the dynamic. “I’m very thankful that I was able to get Ike on board because we’re, for lack of a better term, two peas in a pod. We’re competitive in a similar way. We have the same sense of humor as well, which I think you’ve got to have a little bit sometimes in this profession, or else it will eat you up.”