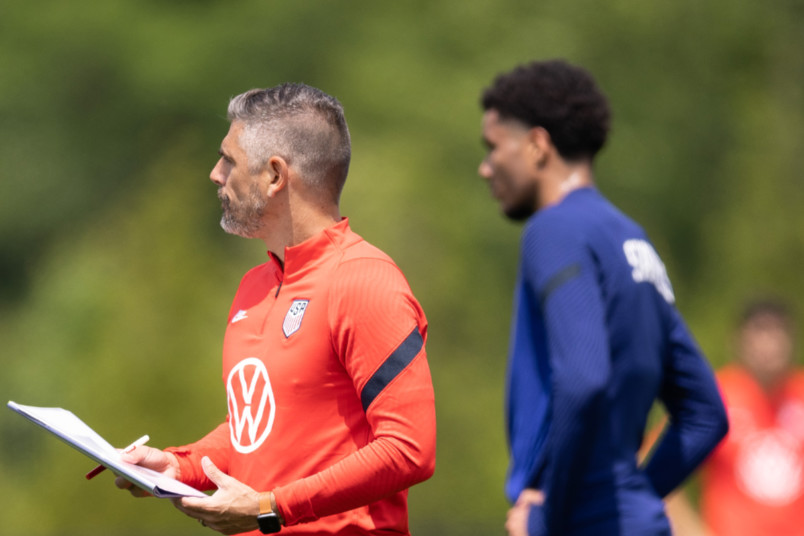 By Charles Boehm – WASHINGTON, DC (Aug 18, 2022) US Soccer Players – From charismatic imports to highly-rated assistants to safe and familiar veterans, trends come and go in MLS coaching hires. One enduring pattern returned this week. The San Jose Earthquakes officially announced their selection of Luchi Gonzalez as their next head coach on Wednesday. He’s the latest in a long line of USMNT staff alums to join the league’s ranks alongside the likes of Josh Wolff, Pat Noonan, Nico Estevez, and Steve Cherundolo, as well as former national team head coaches Bruce Arena and Bob Bradley.

San Jose’s choice makes a lot of sense for a club eager to escape the Western Conference basement that it has occupied all too often since its rebirth in 2008. Central to that is a desire to make better use of the Bay Area’s dense ranks of youth talent, an area of expertise for Gonzalez, a key figure in FC Dallas’ well-known academy renaissance.

The 42-year-old quickly declared MLS Cup Playoffs qualification “a must,” his immediate goal for 2023. It’s a benchmark the Quakes have only achieved four times in those 15 years.

“I’ve gone through my phase and matured and taken my steps to understand the balance of development and competition,” Gonzalez told reporters at an introductory press conference. “Everything I’ve learned through my former experiences in Dallas have led me to this moment to grab the opportunity in San Jose. Yes, development is going to be important, but the ambition is to win.”

There’s a catch. Gonzalez is under contract with US Soccer through the 2022 World Cup. He will finish his USMNT duties before turning his full attention to the San Jose job in the winter.

“I’ve got the full support from Gregg Berhalter, US Soccer in terms of my ability to be focused, compartmentalized and be very present for all my roles for US Soccer,” said Gonzalez. “I’m going to go above and beyond to make sure that US Soccer and those players and that staff, they have the best version of me to compete in the World Cup. But yeah, I will have moments where I will obviously be connected with San Jose to give my thoughts. I need to build the relationship and understand the current staff that’s there, the player pool and I think that’s important, just to understand better the club and what the needs are to improve.”

Theoretically, this is nothing out of the ordinary. The right head coach is usually worth waiting a few months for. In the Quakes’ particular context, this extra wait may extend the frustration of a long-suffering fanbase. The upshot of all this is essentially another season lost, and supporters’ hopes deferred to next spring. Few MLS clubs have asked for more patience from their faithful than the Quakes.

The organization sits near the heart of one of the largest and wealthiest metropolitan areas in the United States. Silicon Valley is just around the corner. San Francisco is a short haul up the road. The Earthquakes reside in their own soccer-specific stadium and are in the process of building a training facility at the Santa Clara County Fairgrounds. Yet they are widely perceived to lag behind MLS’s pace-setters in terms of their scale, ambition, and investment. Gonzalez said on Wednesday he’s received convincing assurances that the Quakes are ready to change that perception.

“What I can say is the club is ready to invest more than it ever has,” said the coach, who was drafted by San Jose at the start of his own professional playing career two decades ago. “The club is ready to put together a staff with more support than it ever has. That was important to me even before my personal situation. You’ll get more details soon, but that’s something that I’m sure will be more clear in the coming months.”

Gonzalez stressed a long-term outlook, while also suggesting that perceptions of the Quakes are worse than reality. He sees “a good core” and “a good starting point” for his next project, with talented starters like USMNT pool members Jeremy Ebobisse and Jackson Yueill and a promising pipeline of homegrown prospects, including Cade Cowell, Cruz Medina, Emmanuel Ochoa, and Niko Tsakiris.

Having coached in and directed FCD’s academy before earning promotion to their first-team coaching post, he’s worked at all levels of player development. His tactics and playing philosophy, dubbed “LuchiBall” in Dallas, have generally been expansive and progressive, oriented around possession, ball circulation, and pressing. Notably, Gonzalez explained that he’s learned a great deal about his craft under Berhalter and is keen to put his USMNT experiences into practice when he returns to head coaching.

Consider that general manager Chris Leitch has shown himself to be adept at leveraging MLS’s various intricacies of acquisition mechanisms and budget management, and the potential makings of a Quakes revival can be detected. San Jose will surely look to case studies like the Philadelphia Union, even if other examples of dramatic MLS turnarounds like Toronto FC suggest hefty spending can speed the process.

There’s a tightrope between inspiration and reform, a balance of demolition and construction in the rebuilding process. In taking his first gig as a No. 1 away from the club that made his name, Gonzalez is betting he’s the one to walk it.

“I’m a glass-half-full guy. I’m going to look at the positives, and there are many. But in my role, I recognize that I need to be critical, we need to improve things, obviously,” he said on Wednesday. “But I’m going to start with our strengths.”