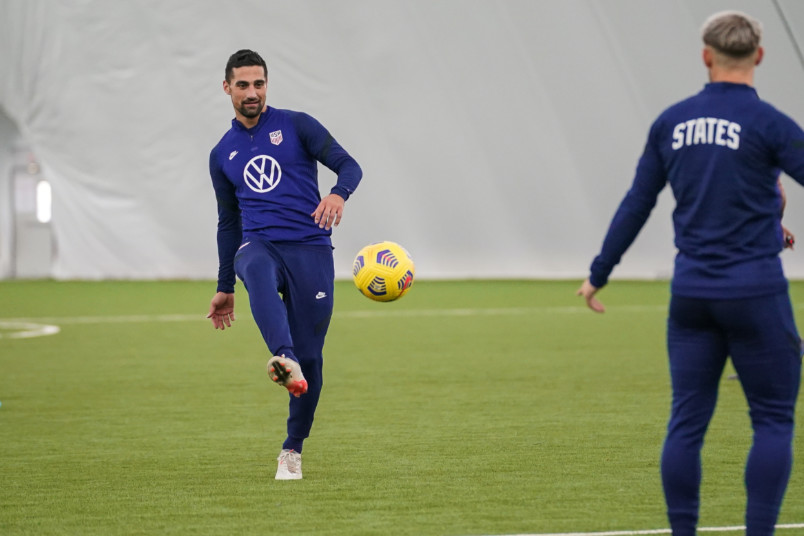 Lletget had only joined the Revolution in the winter, the subject of a significant outlay by Bruce Arena’s team. The move made plenty of sense since it reunited Lletget with his former LA Galaxy head coach and placed him in a team fresh off a Supporters’ Shield triumph in 2021. The Galaxy got a haul of allocation money to fund their rebuild under Greg Vanney and the Revolution got one of the league’s best attacking midfielders.

But New England’s season didn’t go to plan. The departures of Tajon Buchanan in the winter and Adam Buksa and Matt Turner in the early days of the summer pointed to a team in flux. A shift in thinking, rather than any issue with Lletget’s play, made the trade a beneficial one for all involved.

The Revolution sent Lletget to a team led by former USMNT assistant Nico Estevez, an admirer of Lletget’s game from their work together with the national team. One game into Lletget’s Texas adventure, FC Dallas is already reaping its share of the rewards.

Lletget walked straight into the starting lineup in his first game in FC Dallas colors on Saturday, a 4-1 win over San Jose. He provided the assist on two of Dallas’s goals, indicating his learning curve will be a short one. As debuts go, it was a triumph. As a sign of things to come for FC Dallas, it was encouraging. We’re down to the end of the MLS regular seasons, so the faster Lletget gets on the same page as his teammates, the greater his influence on FC Dallas’s place in the standings will be.

His relationship with Estevez is just one explanation for Lletget’s early success in Dallas. Another is his familiarity with two of his new club teammates, Jesus Ferreira and Paul Arriola. The trio hit the ground running as a group, playing off one another in ways that FC Dallas was missing for much of the season.

Ferriera’s two goals pushed his season total to 14, just three off the league lead. The 21-year-old is chasing an honor no American has won since 2012, The MLS Golden Boot, last secured by a domestic player in 2012 when Chris Wondolowski scored 27 goals for the Quakes. He’s proving to be well worth the Designated Player contract the club gave him before the season. Adding Lletget in the midfield should provide more help for Ferreira’s quest.

Lletget’s fast start mirrors the initial success Arriola found in Dallas when he arrived via trade from DC United ahead of the season. Arriola’s move to Texas set a new allocation money transfer record, with United set to earn as much as $2 million in total. FC Dallas paid a hefty fee, but the price tag made sense. Arriola’s vertical game and high work rate were perfect fits for Estevez’s system, a fact born out by the US international’s production this season.

Arriola has nine goals and three assists, with his goal total placing him second on the team behind Ferreira. He’s already established a new career high for scoring with nine games to play in the regular season and figures to hit double digits for the first time in his career. Arriola is a player in his prime, ready and able to do the running required to make FC Dallas’s system work.

Following a two-month period from May to July when the club failed to win and slipped down the table in the Western Conference, Estevez’s team executed a renaissance over the last month. With their three wins and a draw from five matches since the last week of July, Dallas is back up the table in 3rd-place in the West.

The addition of Lletget gives Estevez another quality midfield option during the stretch run of the season. Heat is always a factor in August and September, but this year’s more compact MLS schedule has placed more critical games during the most brutal period of scorching weather.

It’s worth remembering that this is Estevez’s first year with FC Dallas and the club is investing in player talent at a new level. While not among the league’s biggest spenders, Dallas dropped an eight-figure fee to bring in talented attacker Alan Velasco and didn’t hesitate to spend the allocation money earned via outgoing transfers of the likes of Reggie Cannon, Bryan Reynolds, Ricardo Pepi, and Tanner Tessman.

There’s a new level of hope in North Texas that FC Dallas is now more than a club with a very productive academy. Dallas is still focused on developing top talent, but the new direction, embodied by all of those new acquisitions that line up with Estevez’s vision of the game, is already paying dividends.

FC Dallas gave one of its brightest young American players a Designated Player contract. It went out and added another talented American international to augment a new approach. When the opportunity came to bolster the midfield in the secondary transfer window with an eye toward making a playoff run, the club didn’t hesitate to move for an experienced international who is both familiar with two of the key figures in the attack and unlikely to need much time to adapt to his new surroundings.

Add the other notable names like Paxton Pomykal, healthy and in maybe the best form of his career, Matt Hedges, an accomplished veteran defender playing at a high level, and Marco Farfan, who Dallas acquired via trade in February. FC Dallas now has a core capable of turning what was one of the league’s most disappointing teams in 2021 into an MLS Cup contender. In other words, FC Dallas is doing the work.