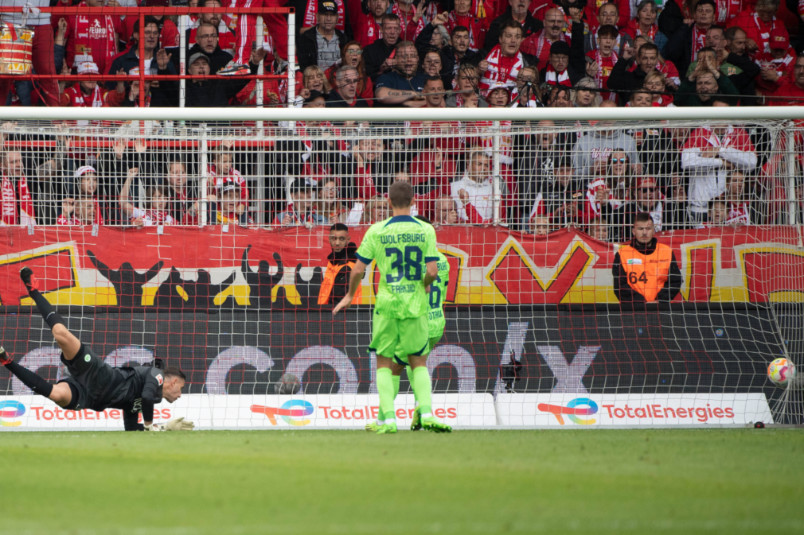 The roundup of USMNT players in Europe and Mexico starts in the Bundesliga where Timmy Chandler subbed on in the 75th minute of Eintracht’s 2-1 win at VfB Stuttgart. Sebastian Rode put Eintracht up in the 6th and Daichi Kamada doubled the lead in the 55th. Stuttgart scored in the 79th, but Kristian Jakic finished off the Eintracht goals in the 88th minute. Jordan Pefok subbed out in the 87th minute of Union Berlin’s 2-0 home win over Wolfsburg. Pefok scored in the 54th and Sheraldo Becker doubled the lead in the 77th minute.

Gio Reyna subbed on in the 32nd and out in the 84th for Borussia Dortmund in their 1-0 home win over Schalke. Youssoufa Moukoko scored in the 78th minute. Joe Scally’s Gladbach won 3-0 at home over RB Leipzig. Gladbach’s Jonas Hofmann scored in the 10th and 35th and Ramy Bensebaini finished off the goals in the 53rd minute.

“It was a top showing from us,” Gladbach coach Christoph Kramer said. “For me, the key was how much possession we had as well as our positional play. It may not be the most attractive style of football when we have to pass it back to our keeper, but it’s really important that we don’t get caught out by our opponents’ pressing. We need to keep the ball moving until a clear opportunity opens up, and we did that very well.”

Terrence Boyd subbed out in the 87th minute of Kaiserslautern’s 2-2 draw at Heidenheim in the 2.Bundesliga. Falling behind in the 17th, Boyd equalized in the 20th. A red card to Kaiserslautern’s Andreas Luthe had Heidenheim up a man in the 41st and up a goal in the 44th. Boyd equalized again in the 60th minute. Julian Green subbed out in the 71st minute of Furth’s 2-1 home win over Paderborn. Damian Michalski scored for Furth in the 42nd with Paderborn equalizing in the 49th. Furth’s Branimir Hrgota scored in the 73rd minute.

With several postponements in the Premier League, Tim Ream’s Fulham beat Nottingham Forest 3-2 away. Down from an 11th minute goal, Fulham’s Tosin Adarabioyo equalized in the 54th, Joao Palhinha scored in the 57th, and Harrison Reed made it 3-1 in the 60th. Forest scored again in the 77th minute.

A league down, Josh Sargent’s Norwich City drew 1-1 with West Brom at home. Dara O-Shea scored for West Brom in the 9th with Sam Byram equalizing for Norwich in the 68th minute. Lynden Gooch’s Sunderland drew 2-2 at Watford, trailing from a 34th minute goal. Sunderland’s Aji Alese equalized in the 45th with Watford retaking the lead from a 62nd minute own-goal. Jewison Bennette equalized for Sunderland in the 87th minute.

Duane Holmes subbed out in the 80th minute of Huddersfield Town’s 1-0 home win over Cardiff City. Jordan Rhodes scored in the 8th minute. Ethan Horvath’s Luton Town shutout Blackburn 2-0 at home. Carlton Morris scored in the 58th and Reece Burke doubled the lead in the 67th minute. Horvath made one save to keep the clean sheet. Zack Steffen’s Middlesbrough finished 0-0 at home with Rotherham United. Rotherham finished without a shot on goal.

Malik Tillman subbed on in the 70th minute for Rangers in their 2-1 home win over Dundee United in the Premiership. Antonio Colak put Rangers up in the 8th, scoring again in the 49th. Dundee United pulled a goal back in the 59th minute.

Luca De la Torre subbed on in the 80th minute of Celta Vigo’s 3-0 loss at Valencia in La Liga. Valencia’s Samu Castillejo scored in the 37th and Valencia went a man up with a red card to Franco Cervi in the 59th. Marcos Andre added a goal in the 82nd and Andre Almeida scored three minutes into stoppage time. Erik Palmer-Brown’s Troyes came back to beat Clermont Foot 3-1 away in Ligue 1. Down from a 3rd minute goal, Mama Balde scored for Troyes in the 23rd and 54th. Renaud Ripart finished off the Troyes goals in the 83rd minute.

Weston McKennie’s Juventus lost 1-0 at Monza to a 74th minute goal. Juve played a man down from the 40th with a red card to Angel Di Maria. Sergino Dest subbed on at halftime for AC Milan’s 2-1 home loss to Napoli. Olivier Giroud score for Milan in the 69th, but Napoli equalized from the penalty spot in the 55th and went ahead in the 78th. In Seire B, Gianluca Busio and Andrija Novakovich’s Venezia drew 1-1 at home with Pisa. Novakovich scored in the 40th with Pisa equalizing in the 44th and going a man down in the 71st minute.

Ricardo Pepi subbed out in the 65th minute of Groningen’s 2-1 loss at Sparta Rotterdam in the Eredivisie. Pepi scored in the 61st but Sparta equalized in the 73rd and converted a 90th minute penalty. In Belgium’s Pro League, Bryan Reynolds’s Westerlo won 3-2 at Charleroi. Reynolds scored in the 3rd and Maxim De Cuyper made it 2-0 in the 10th. Charleroi pulled a goal back in the 36th, equalizing in the 88th. Westerlo’s Kyan Vaesen scored their winner in the 89th minute.

Joe Corona subbed out in the 65th minute of GIF Sundsvall’s 1-1 draw at Mjallby in the Allsvenskan. Ronaldo Damus scored for Sundsvall in the 77th with Mjallby equalizing three minutes into stoppage time. Joe Gyau’s Degerfors drew 1-1 at AIK. Down a goal from the 12th, Rasmus Orqvist equalized for Degerfors in the 53rd minute.

Reggie Cannon’s Boavista beat Sporting 2-1 at home in the Primeira Liga. Bruno Lourenco scored for Boavista in first-half stoppage time with Sporting equalizing in the 55th. Lourenco converted a penalty in the 83rd minute. John Brooks subbed on for Benfica in the 89th minute in their 5-0 home shutout of Maritimo. Rafa Silva put Benfica up in the 28th and Goncalo Ramos added goals in the 47th and 64th. David Neres made it 4-0 in the 82nd and Julian Draxler finished off the scoring in the 88th minute.

Caleb Stanko’s Asteras Tripolis drew 1-1 at Levadiakos in the Greek Super League. Trailing from the 48th, Pepe Castano equalized for Asteras Tripolis in the 54th. Kenny Saief’s Neftchi won 2-0 at Sebail in the Azerbaijan Premier League. Emin Mahmudov scored in the 53rd and Guilherme Pato made it 2-0 in the 83rd.

Mix Diskerud subbed on in the 65th minute of Omonia’s 4-0 home win over Paralimni in the Cypriot First Division. Nemanja Miletic scored for Omonia in the 31st with Bruno Felipe doubling the lead in first-half stoppage time. Omonia’s Karim Ansarifard made it 3-0 in the 57th and Panagiotis Zachariou finished off the goals in the 78th minute. Haji Wright’s Antalyaspor lost 3-0 at home to Adana Demirspor in the Super Lig. Antalyaspor fell behind in the 1st minute and went a man down with a red card to Soner Aydogdu in the 8th. Adana Demirspor saw red in the 39th with Antalyaspor’s Shoya Nakajima exiting to a red card in the 61st. Adana Demirspor added goals in the 75th and 84th minutes.

Aron Johansson’s Valur lost 1-0 at home to KA in the Urvalsdeild karla. Valur went a goal down in the 75th and a man down with a red card to Patrick Pedersen in the 88th minute.