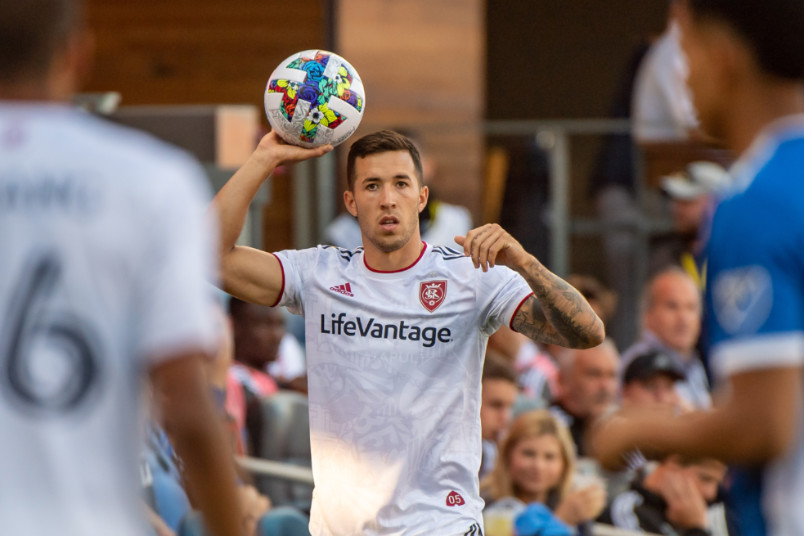 By Jason Davis – WASHINGTON, DC (Sep 21, 2022) US Soccer Players – When MLS teams look back on their seasons after the 34-game grind that pushed everyone to their physical and mental limits, they’ll undoubtedly point to a few key moments as crucial to their finish. Comeback wins always get a little extra love. Late goals to salvage points will seem bigger if the playoffs beckon and bittersweet if they don’t. On the other side of the equation are points dropped, home games lost, and costly mistakes.

Beyond the moments, it’s about the players. Those responsible for late winning goals and important defensive stops, but also those who put in consistent performances every time they stepped on the field.

Winning teams need quality performances across the field. As September ends and the playoffs beckons, players who raise their game with the postseason on the line. With a few games left to make the playoffs or improve their place in the standings, let’s take a look at three players doing the work necessary to help their teams find success: Andrew Gutman of Atlanta United, Aaron Herrera of Real Salt Lake, and Eryk Williamson of the Portland Timbers.

If we had to credit one player with keeping Atlanta United alive for a chance at a playoff berth with two games to go despite a topsy-turvy campaign filled with drama and ineffective, that would be fullback Andrew Gutman.

After playing in the Chicago Fire’s academy system, Gutman played college soccer at Indiana University in his home state. Winning the Hermann Trophy in his senior season, Gutman passed on a contract with the Fire to sign with Celtic in Scotland.

Gutman ultimately landed in Major League Soccer via a loan to FC Cincinnati in 2019. Following the 2020 season, he was ready to make a permanent move to MLS. Atlanta United acquired Gutman from Celtic, then loaned him to the New York Red Bulls for 2021.

In his first season in Atlanta, Gutman is delivering on the potential he showed as the country’s best college soccer player at Indiana. He ranks in the top 10% in the league for fullbacks in a host of categories, including goals per 90 minutes, xG per 90, tackles per 90, and blocks per 90. He’s a dynamic force on the wing for Atlanta and has popped up with timely goal contributions when the club needed heroics most.

Gutman missed more than two months with a quad injury in the middle of the season, an absence keenly felt by a team beset by long-term injury problems.

His assist to set up Thiago Almada for Atlanta’s winning goal against Orlando a week ago kept his club alive for the playoffs. It sparked a belief that an improbable run is possible. It’s not an exaggeration to say that Gutman has been one of the league’s best players over the last month.

It’s tough to highlight anyone from this year’s Real Salt Lake team when the club’s ethos is “the team is the star.” Defender Aaron Herrera is just one example of a player key to what the club has achieved as part of a collective under head coach Pablo Mastroeni.

Players like Herrera, a Homegrown signing by RSL back in 2017, have long allowed the club to punch above its proverbial weight. At 25, Herrera is only just entering his prime. His experience with RSL teams of the past which included legendary figures Kyle Beckerman and Nick Rimando, also helps ensure the culture won’t change.

This season Herrera is once again a steady presence at right back. Despite a dip in form over the last month, RSL remains in the thick of the Western Conference playoff race with a handful of games to go.

Portland can confidently point to the return to the field of midfielder Eryk Williamson as the key reason for their rise. Williamson’s star status will change, and soon, at this current rate. A long-term injury that kept him out of the Timbers lineup slowed his ascension to the ranks of the league’s best two-way midfielders and hampered Portland’s quest to make the playoffs and defend their Western Conference title.

The Timbers reached last year’s MLS Cup final without Williamson. This year, the evidence is clear that they’re a better team with him manning the center of the park. Williamson’s stats put him in elite company across MLS in 2022. He’s in the top percentile for assists per 90 minutes among all MLS midfielders and ranks among the top midfielders in shot-and-goal-creating actions per 90 minutes.

Williamson has star numbers as a player who is still building his profile. Perhaps he’s no unsung hero, but in a league full of Designated Players and big-dollar transfers, the University of Maryland and DC United academy product is rarely mentioned with the marquee names promoted most aggressively by MLS itself.

Injury slowed the 25-year-old’s breakout last season. With his momentum at full throttle heading into the playoffs, he’s now in position to stand out on the league’s biggest stage.

The hammer is down and the season is rushing to its end at full throttle. Every team needs players who will match that intensity and rise to the occasion. Gutman, Herrera, and Williamson have shown they’re meeting the challenge. If their teams reach the postseason and get a chance to play for an MLS Cup, they’ll be a significant reason why.