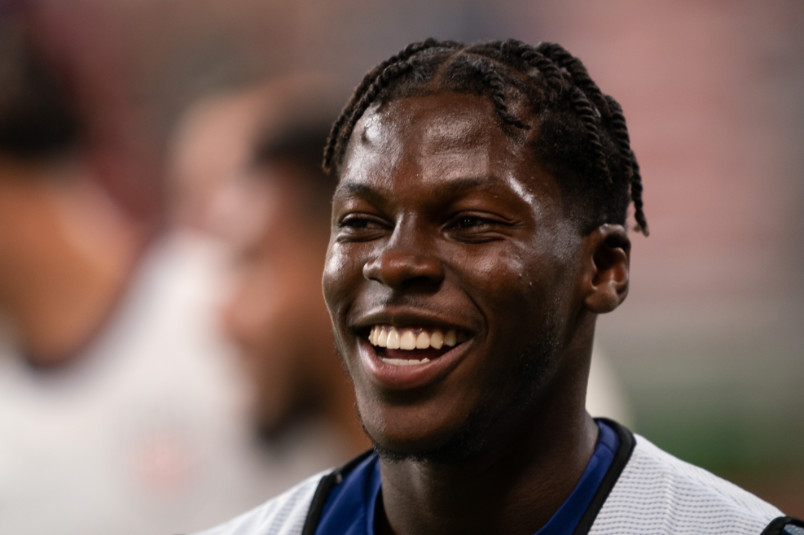 By Charles Boehm – WASHINGTON, DC (Sep 2, 2022) US Soccer Players – Yunus Musah seems settled, valued, and content at the outset of his fourth season at Valencia CF.

“This summer, it was great to see the new coach come in with a new plan and everything,” the midfielder said last week about his new coach Gennaro Gattuso. “He integrated me into the plans well, really believes in me and stuff. So I have no reason to leave right now. I’m really happy here. The fans have supported me through some tough moments, and some good ones. I love being here, and I can’t wait for some really big things this season. I’m trying to do my best and keep working hard here.”

Musah was speaking to a Zoom call of reporters, a media availability dubbed “LaLiga Spotlight” that also featured Atletico Madrid’s young star Joao Felix. The event was held by ESPN+ and LaLiga North America, a notable sign of an advancing promotional strategy heading into the second season of an eight-year, $1.4 billion broadcasting deal with ESPN.

With its 380 league matches streamed to a potential viewership of over 22 million on ESPN+ and big occasions like the FC Barcelona vs. Real Madrid blockbusters showcased on the Worldwide Leader’s over-the-air channels, La Liga is as accessible as it’s ever been in the United States. And it aspires to more, much more.

“For us, the USA is, after Spain, the most important country that we need to actually activate,” La Liga president Javier Tebas told Sports Illustrated two years ago. “The league has to make an effort to attract American viewers and supporters. We need to find those supporters.”

That naturally prompts a search for tentpole attractions to lead their promotional efforts. That includes promoting clubs beyond the two giants who have dominated the scene in just about every respect for decades.

Musah has steadily advanced in the USMNT picture since committing his international allegiance in March 2021. He’s skillful, versatile, and dynamic on the pitch, warm and unassuming off it. The talented 19-year-old offers La Liga an obvious Stateside connection with ample future upside.

“It feels great getting this much exposure, being able to be out there,” said Musah when asked about his and La Liga’s rising US profile. “The kids know that they can watch our games and watch the players they like. I get a lot of messages also, saying keep going, motivating me. Also a lot of nice comments say how well I play sometimes. I check the comments, the US flags, the guys, they’re great, they’re amazing. So I really love it and I’m glad they now get to see a lot of us play over here in Spain.”

Musah has the combination of longevity and regular playing time that has proven difficult for Americans in Spain. It’s a reason he stands a very good chance of a major role in Qatar this fall, and history shows that strong performances at that tournament have the power to transform a player’s career.

“That was always my motivation when I went to World Cup qualifiers, thinking about being able to play in the World Cup, and getting to that stage,” said Musah, smiling again as he revealed the image of the iconic trophy that he’s used as the screensaver on his mobile phone for two years. “I was making sure I did whatever I could to be able to win and get to the World Cup. And now that obviously we are qualified, yeah, you’re just kind of waiting, and hopefully you get picked and you stay injury-free, all of those things.”

Not only La Liga but ESPN, too, has motivation to celebrate and elevate such a talent. Both parties crave a larger audience in North America.

“The investment (in La Liga) is paying dividends in a lot of ways. It’s an anchor tenant for us, a long-term investment to establish ourselves as an indispensable subscription service for soccer fans here in the US,” ESPN VP of Digital Programming John Lasker told Front Office Sports earlier this year, calling March’s edition of El Clasico “the most engaged, most used, most viewed soccer match we’ve ever had on the (ESPN+) platform.”

This season could show us how a USMNT standout or two can help La Liga advance in the increasingly crowded US soccer viewing landscape.