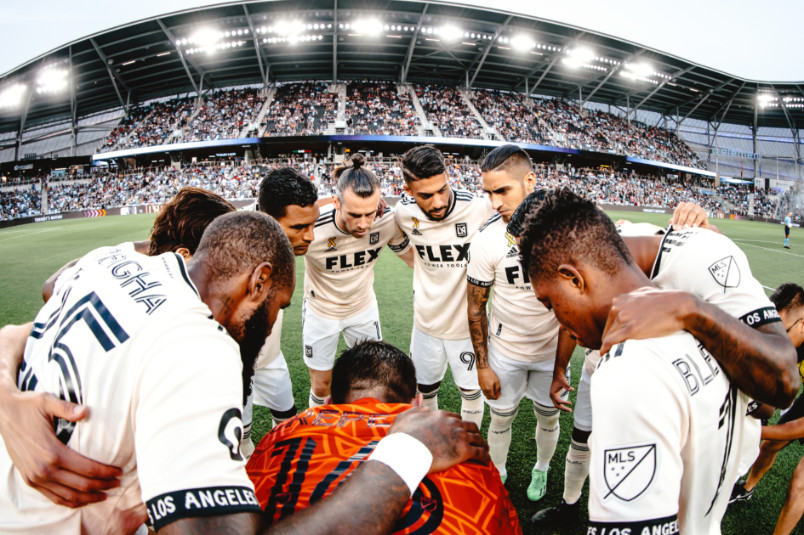 By Luis Bueno – RIVERSIDE, CA (Sep 14, 2022) US Soccer Players – LAFC has been dominant most of the 2022 season. The Western Conference leaders carried a four-match winning streak into August and promptly ripped off three more wins by a combined 10-1. After the club’s seventh consecutive win, LAFC sat on 57 points and seemed well on its way to a Supporters’ Shield and entering the playoffs as the unquestioned MLS Cup favorite. Six matches later, and that has changed.

LAFC hit an unexpected rough patch, and the luster is coming off. The club’s latest result, a 1-1 come-from-behind draw at Minnesota, was just the fourth point LAFC has compiled in the last six matches, a spell that featured a four-game road losing streak.

Not all is lost, of course. The rough patch has not torpedoed LAFC’s season, but the opportunity for the team to get back to its early-August form is slowly fading. LAFC has just three games remaining before the end of the regular season, and could use a quick resurgence to get back to where the club needs to be. On its best form, ready to roll through the Western Conference.

Winning MLS Cup is the goal of every MLS team, and so it is with LAFC. But this team has poured in many resources and has changed over much of the roster. Anything short of an MLS Cup run would be a letdown.

LAFC has invested heavily in this roster ever since the transformation began in 2021. Diego Rossi departed, and in his stead, the club brought in Cristian “Chicho” Arango. This year the club upped the ante and went for big-name Old World players in Giorgio Chiellini and Gareth Bale, one of the biggest names to join MLS in several years. The club didn’t stop there, though, adding the likes of Denis Bouanga as a Designated Player and former Real Betis attacker Cristian Tello.

Of course, the club wasn’t exactly barren before those moves. The challenge over the course of this season has been for Steve Cherundolo, who took over as coach for Bob Bradley at the end of last season, to not only hit the ground running but to be flexible. The plan may not have been to target those specific players at the start of the year, but the roster was and always has been in flux. In 2019, the club brought in several players during the middle of the season and kept right on humming. That season ended in disappointment, and because of that, this season cannot follow the same pattern.

The challenges are greater this season because the pieces of the puzzle are more difficult to fit in and make work with one another.

Consider this: LAFC is second in the league in goals scored with 61, but the club made massive changes to the front line. Bouanga is a striker and Bale is a striker/winger. The club already has attacking talent like Arango (16 goals), Carlos Vela (nine goals, 11 assists), Jose Cifuentes (seven goals, seven assists), and Kwadwo Opoku (seven goals). But there are only a few attacking spots to go around.

Enter Cherundolo. The first-year manager has the task of doing just that, managing the roster and keeping players sharp and match-fit. A big part of that is trying to prepare for any situation the club might face in the postseason. What players would do best coming off the bench with the team trailing? Who could give the team some bite in the midfield in a chippy match? What defensive moves could the team make to protect a lead?

There is, however, the more pressing issue of regaining the team’s form. Perhaps trying to manage playing time and giving players rest has played a role in the drop in form. Tuesday’s result may have been a bit of a preview of what the team might look like come the postseason. Bale and Vela started, just the second start for Bale this season. Arango subbed off at halftime in favor of Cifuentes, while Bale exited in the 62nd minute for Opoku. LAFC scored in the 64th minute as those moves, particularly the latter one, seemed to have paid dividends. To secure the road point, Cherundolo brought on Chiellini with three minutes remaining as LAFC held on to what has become a sort of valuable road point.

The club did show some determination in pulling out the point. The previous match LAFC had its biggest meltdown of the season. The club went down a man midway through the first-half but took the lead right before halftime. However, LAFC let in two late goals. The first saw FC Dallas taking advantage of a quick restart against players who were caught not paying attention. That loss was the fourth consecutive road setback.

Minnesota was the one taking the lead just before halftime on Tuesday, but LAFC showed some toughness in battling back.

LAFC’s remaining schedule is not easy. Up next is Houston, who handed LAFC a 2-1 loss in Houston on August 31 and has seven points in its last four matches. Then LAFC travels to Portland on October 2, who pulled out a point from Banc of California in a 1-1 draw on March 6. The regular season finishes off with a visit from Nashville, who is fighting to stay ahead of Minnesota and Portland in 4th-place in the Western Conference.

Aside from Houston, already eliminated from playoff contention, it is likely that LAFC has just played or will play the team they’ll face in their playoff opener. That’s even more reason for the club to play with urgency in the coming weeks.

Whatever the case, LAFC must use the remaining games on its schedule to get back to form and get to the playoffs in the best shape possible. If that means the Supporters’ Shield is out of reach, so be it. The main goal for this year is MLS Cup anyway.