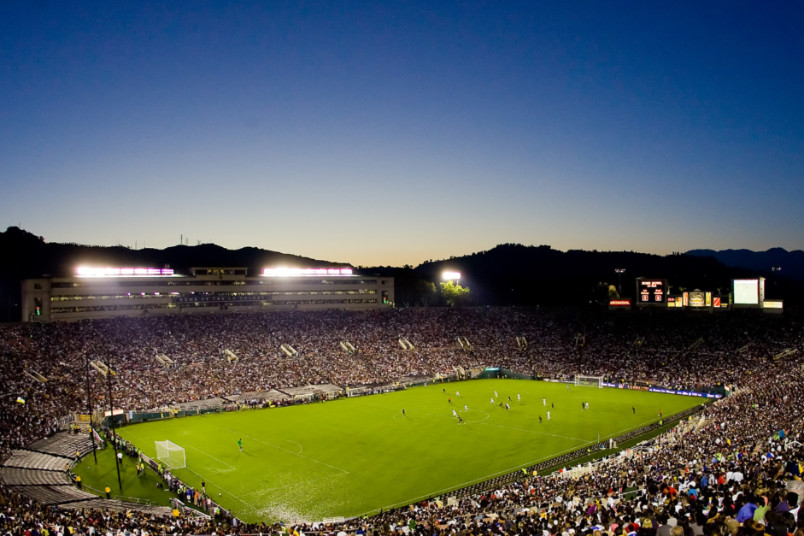 By Luis Bueno – RIVERSIDE, CA (Sep 28, 2022) US Soccer Players – The 2022 Major League Soccer regular season is coming to what should be a dramatic close, and the playoffs will ramp up the drama afterward. For Los Angeles-area soccer fans, that means twice the amount of meaningful matches as both LAFC and the LA Galaxy appear playoff bound. LAFC is one of three teams that has already booked its postseason ticket, while the hard-charging Galaxy is almost there. That means the intensity and high stakes will only increase from October 9, the always-mad final-day scramble through MLS Cup on November 5.

But can it be February already?

The LA Galaxy and LAFC have much to play for in 2022, but the teams will open their respective 2023 slates with a high-profile, high-stakes derby match in a unique but familiar setting. It will certainly be a highly-anticipated game.

The teams announced this week that they will meet on February 25 at the Rose Bowl to start the 2023 season. Thus, in one fell swoop, the Galaxy will bridge the past to the present and future as the MLS originals return to the place where it all began. The match will take on even more significance if one of the two participating teams can actually finish this year off in successful fashion, which for either side means winning MLS Cup.

For LAFC, that is more a realistic goal and should be an expectation. The team has spent money and resources into overhauling its roster. Despite the massive turnover from last season to now, LAFC has not only maintained its high level of success but has upped the ante. LAFC controls its own destiny in the single-table. Two wins, and LAFC claims its second Supporters’ Shield.

Still, the carrot dangling in front of LAFC is not the Supporters’ Shield, although the club would certainly celebrate that prize. 2019 was a magical year for LAFC that ended without an MLS Cup. Another such end to the season would be an even bigger letdown this time around, potentially tagging them with a reputation in big playoff games that no ambitious team wants.

The Galaxy, meanwhile, would love nothing more than to return to the Rose Bowl as MLS Cup champions. In 1996, the Galaxy began play at the Rose Bowl. That first season they set the pace in MLS and was its best team all the way through the inaugural MLS Cup, which the Galaxy lost in a heartbreaker to DC United.

For the league’s first seven seasons, the Galaxy was essentially the best team in MLS. The only thing missing was an MLS Cup title. Perhaps in fitting fashion, the Galaxy got its MLS Cup championship in its final season at the Rose Bowl. They won MLS Cup 2002, just in time to open the Home Depot Center the following season.

The Galaxy has gone on to win four more MLS Cups, but the club has been stuck on five since 2014. Five titles in a 13-year span is certainly impressive, but it’s a frontloaded run of form. If things don’t change thos season, it will be an eight-year drought, the Galaxy’s longest such stretch with MLS Cup.

Perhaps that will spur the Galaxy come the postseason. The team that always contends for championships hasn’t made the playoffs in four of the last five seasons.

As recently as two months ago, the Galaxy looked like it would make it five of six, but the team has been playing its best soccer when it needs to the most. Since August 13, the Galaxy has compiled a 4-1-4 record, accumulating 16 points in the process. They enter the penultimate weekend on 46 points, good for 5th-place, and is in prime position to reach the playoffs.

The Galaxy’s return to the Rose Bowl would be complete with another MLS Cup title. It owuld serve as proof that the club that set one of the original standards in this league is moving with it into the future.

For both teams, the path to an MLS Cup may involve playing the other is an added benefit. The teams already have a postseason meeting in its history. LAFC beat the Galaxy 5-3 in 2019. If the Galaxy finishes either fourth or fifth and wins its first postseason game, the two teams would meet again in an elimination match this year. The Galaxy beat LAFC in a US Open Cup match this season, and the playoff game would add yet another wrinkle to the rivalry.

Regardless of what happens, playing in the Rose Bowl to start the 2023 season, though, will be a spectacle. By then, the NFL season will be over, and the Major League Baseball season will not yet have started. The Lakers/Clippers and Kings/Ducks will be well into their respective NBA/NHL seasons, but the Galaxy and LAFC should enjoy the spotlight relatively free of distractions.

The game could generate quite a bit of buzz. Not only will it be the first game of the season following the World Cup, but it will also be a rivalry match. Both factors will help transcend MLS and appeal to the casual LA sports fan. With that much attention and the historic tie-in, the game could challenge for the MLS attendance record. A soldout Rose Bowl crowd watching MLS powers past, present, and future would provide for a memorable start to the 2023 season.