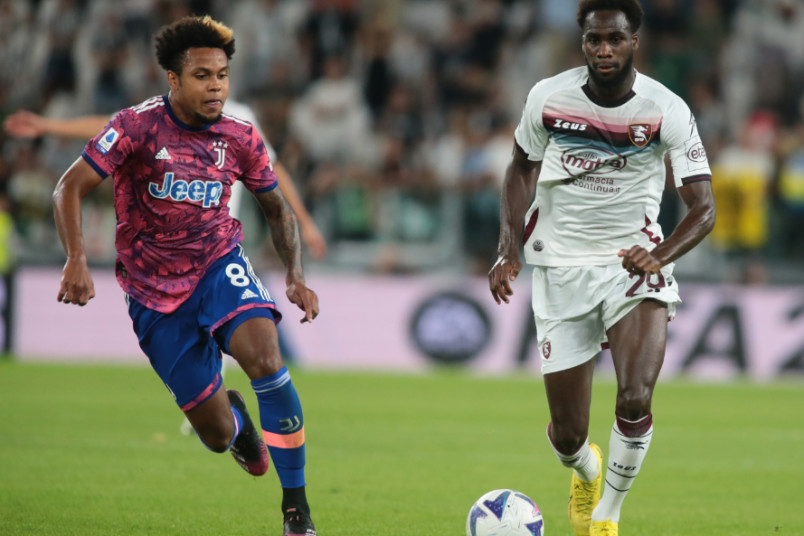 “This match must teach us that if we play like we did in the first-half we won’t go anywhere, however if we approach it like we did in the second-half we can have our say in this championship,” Bonucci said. “We’ve been experiencing roller coaster games for a couple of seasons now and that’s not good. You cannot allow moments of play to any team, because when you are at Juve there is only victory.”

Tanner Tessmann subbed on at halftime and Andrija Novakovich in the 58th minute of Venezia’s 2-0 loss at SPAL in Serie B. Tessmann saw red in the 88th minute.

In the Bundesliga, Jordan Pefok subbed out in the 75th minute of Union Berlin’s 1-0 win at Cologne from a 3rd minute own-goal. Gio Reyna subbed on in the 59th minute of Borussia Dortmund’s 3-0 loss at RB Leipzig to goals in the 6th, 45th, and 84th minutes. Joe Scally’s Gladbach drew 0-0 at Freiburg.

A league down, George Bello subbed on in the 87th minute of Arminia Bielefeld’s 1-0 loss at FC Nurnberg to a 90th minute goal. Terrence Boyd’s Kaiserslautern drew 3-3 at home with Darmstadt, falling behind to a first-half stoppage time penalty and a 49th minute goal. Kenny Prince Redondo pulled a goal back for Kaiserslautern in the 74th with Mike Wunderlich converting a penalty in the 77th. Redondo scored again in the 87th with Darmstadt equalizing a minute into stoppage time. Julian Green subbed on in the 59th minute of Furth’s 2-1 loss at Magdeburg. Trailing from the 38th, Furth’s Damian Michalski equalized in the 42nd. Magdeburg scored again in the 86th minute.

Yunus Musah’s Valencia lost 2-1 at Rayo Vallecano in La Liga, falling behind in the 5th minute and giving up a 52nd minute own-goal. Valencia’s Mouctar Diakhaby scored three minutes into stoppage time. Musah saw yellow in the 68th minute. In Ligue 1, Erik Palmer-Brown subbed out in the 66th for Troyes in their 1-0 loss at Lens to a 39th minute goal.

Ricardo Pepi subbed on at halftime of Groningen’s 1-0 win at Cambuur in the Eredivisie, with Pepi assisting on Tomas Suslov’s goal in the 71st minute. Joe Corona subbed on in the 67th minute of GIF Sundsvall’s 2-0 home loss to Elfsborg in the Allsvenskan. Joe Gyau’s Degerfors drew 0-0 at home with Mjallby. Gyau saw yellow in the 90th minute.

Reggie Cannon saw yellow in first-half stoppage time and subbed out at halftime in Boavista’s 2-1 win at Arouca in the Primeira Liga. Arouca played a man down from the 10th, going ahead in the 27th minute. Boavista’s Vincent Sasso scored in the 31st and Martim Tavares added a goal in the 70th. Arouca saw red again in the 84th minute.

Konrad De La Fuente subbed on in the 78th minute of Olympiacos’s 1-1 home draw with Volos in the Greek Super League. Down a goal from the 29th, Youssef El-Arabi equalized for Olympiacos in the 77th. Caleb Stanko’s Asteras Tripolis lost 2-0 at home to Aris to goals in the 20th and 60th. Aris played a man down from the 77th minute.

Kenny Saief’s Neftchi won 2-1 at Gabala in the Azerbaijan Premier League. Trailing from the 32nd, Neftchi’s Ataa Jaber equalized in the 46th and scored again in the 53rd minute. Mix Diskerud subbed on in the 85th minute of Omonia’s 2-1 loss at Apollon. Bruno Felipe converted a 14th minute penalty for Omonia with Apollon equalizing in the 63rd and scoring again in the 83rd. Haji Wright’s Antalyaspor lost 1-0 at Kayserispor in Turkey’s Super Lig to a goal in the 54th minute.

Johnny Cardoso subbed out in the 60th minute of Internacional’s 1-0 home shutout of Cuiaba in Brazil’s Serie A. Internacional’s Alexandre Zurawski scored in the 68th minute.