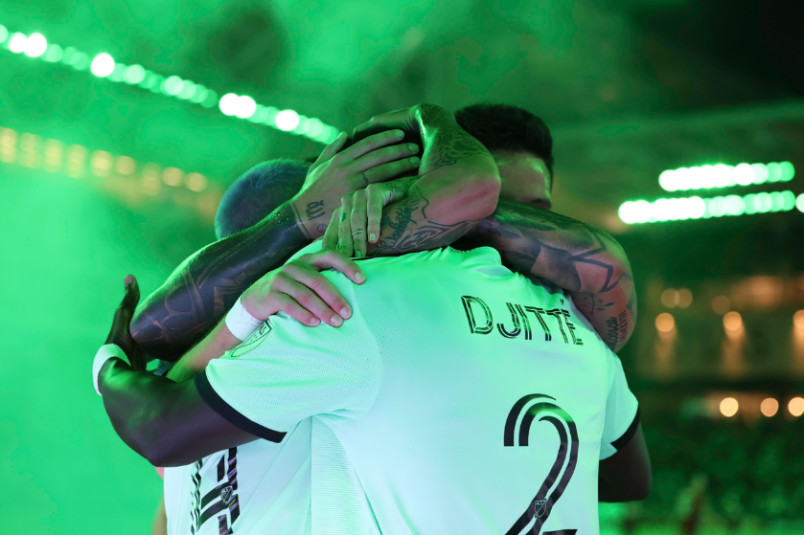 “Perfect timing,” Atlanta coach Gonzalo Pineda said. “I think it’s very good, I mean, more than those stats of second victory, second victory on the road. It’s the timing of it, it puts us in a very good position to fight for a playoff spot. We need to continue. Nothing is done yet but the spirits and the passion the players are putting on the field is very good.”

Colorado beat San Jose 2-1 at home with Diego Rubio opening the scoring for the Rapids in the 21st minute. San Jose’s Nathan Cardoso equalized in the 37th, but it was Keegan Rosenberry scoring Colorado’s winner in the 77th minute.

Vancouver shutout the Galaxy 3-0 at BC Place. Ryan Gauld put the Whitecaps up in the 57th with Pedro Vite (68th) and Tosaint Ricketts (86th) adding goals. Vancouver goalkeeper Thomas Hasal made two saves to keep the clean sheet.

NYCFC beat Atlas 2-0 at home to win the 2022 Campeones Cup. Alexander Callens put New York up in the 4th and Maxi Moralez doubled the lead in the 49th minute. NYCFC goalkeeper Luis Barraza made seven saves to keep the clean sheet. In Liga MX, Ventura Alvarado subbed on in the 87th minute for Juarez in their 2-1 home win over Pachuca. Gabriel Fernandez scored for Juarez in the 3rd with Pachuca equalizing in the 9th. Juarez’s Alan Medina scored in the 43rd. Alvarado saw yellow four minutes into stoppage time.

Moving to the Champions League, Sergino Dest subbed on in the 78th minute of AC Milan’s 3-1 home win over Dinamo Zagreb. Milan’s Olivier Giroud converted a 45th minute penalty and Alexis Saelemaekers made it 2-0 in the 47th. Dinamo pulled a goal back in the 56th, but Tommaso Pobega finished off the Milan goals in the 77th minute. Cameron Carter-Vickers’s Celtic drew 1-1 at Shakhtar Donetsk with an own-goal putting Celtic up in the 10th minute. Shakhtar Donetsk equalized in the 29th.

Christian Pulisic subbed on in the 84th minute of Chelsea’s 1-1 home draw with Red Bull Salzburg. Raheem Sterling put Chelsea up in the 48th with Salzburg equalizing in the 75th minute. Weston McKennie’s Juventus lost 2-1 at home to Benfica. John Brooks was on the bench for Benfica. Arkadiusz Milik scored for Juventus in the 4th with Benfica’s Joao Mario equalizing from the penalty spot in the 43rd and David Neres scoring in the 55th.

“There are few explanations to give,” Juventus coach Massimiliano Allegri said. “We collapsed psychologically after the 2-1. Now, we just have to work and take it one step at a time, football always gives you the chance to get back up. These moments in football happen, we have to face everything with clarity and serenity knowing that we cannot lose two games in a row in the Champions League. There are many reasons as to why tonight went the way that it did, now it makes little sense to talk about the problems that exist because we have to find a solution, playing once again in four days.”

Gio Reyna subbed out in the 62nd minute of Borussia Dortmund’s 2-1 loss at Manchester City. Jude Bellingham put Dortmund up in the 56th, but City equalized in the 80th and went ahead for good in the 84th minute. James Sands started and Malik Tillman subbed on in the 82nd minute for Rangers in their 3-0 home loss to Napoli, with Sands seeing red in the 55th. Napoli failed to convert a penalty in the 60th, taking the lead from a 68th minute penalty, and adding goals in the 85th and a minute into stoppage time.

“The performance was really good, the result wasn’t good,” Rangers manager Giovanni van Bronckhorst said. “I don’t think we deserved a 3-0 loss. If you see how the game went on, how we reacted after last week, we were well in the game from the first minute with some big chances. With 10 men and 1-0 down you have to take some risks, but we’re disappointed because we were well in the game at eleven v eleven.”

In the Championship, Josh Sargent’s Norwich City beat Bristol City 3-2 at home. Teemu Pukki put Norwich up in the 11th, scoring again in the 23rd. Bristol City pulled a goal back in the 44th, but Sargent made it 3-1 in the 65th minute. Bristol City scored again in the 77th. Lynden Gooch’s Sunderland shutout Reading 3-0 away. Patrick Roberts scored for Sunderland in the 39th and 41st and Jack Clarke added a goal in the 69th minute.