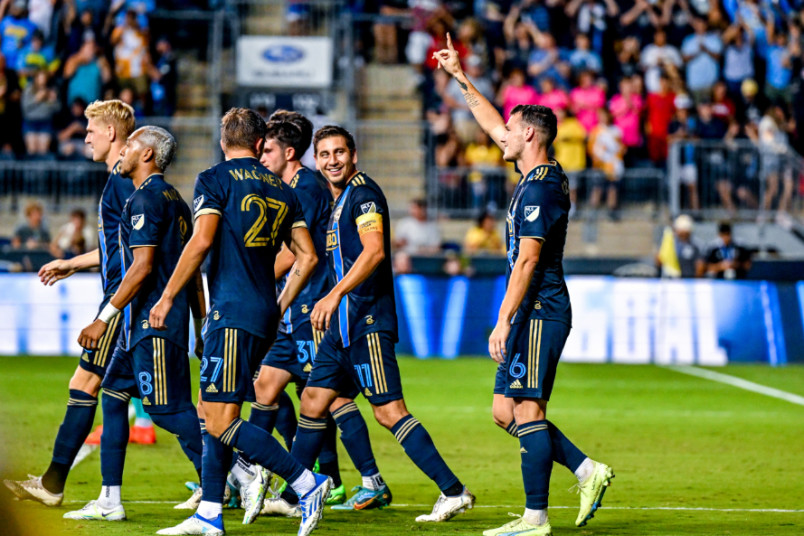 The MLS Week 30 roundup starts with Friday’s game at Stade Saputo where Montreal and Columbus drew 2-2. The Crew took the lead through a Jonathan Mensah goal in the 66th with Lucas Zelarayan scoring in the 68th, but went a man down with a red card to Luis Diaz in the 76th minute. Montreal pulled a goal back when Victoir Wanyama scored in the 89th and Zachary Brault-Guillard equalized ifour minutes into stoppage time.

On Saturday, Charlotte shutout NYCFC at home. Daniel Rios scored Charlotte’s goal in the 5th minute with Christian Fuchs seeing red in the 56th. Charlotte goalkeeper Kristijan Kahlina made one save to keep the clean sheet.

The Red Bulls came back to beat New England 2-1 at home, falling behind to a 53rd minute Thomas Mcnamara goal. Cristian Casseres Jr equalized for New York in the 58th and Lewis Morgan converted a 78th minute penalty.

Atlanta beat Toronto 4-2 at Mercedes-Benz Stadium. Juanjo Purata put Atlanta up in the 47th with Toronto equalizing through Ayo Akinola in the 52nd. It was Purata gain for Altanta in the 62nd, with Toronto’s Federico Bernardeschi converting a 67th minute penalty. Thiago Almada scored for United in the 74th with Purata getting his third goal of the game in the 88th minute.

“We have to do our part, which is going game by game, trying to win every game,” Atlanta coach Gonzalo Pineda said. “But not just the result, which ultimately is what defines our jobs but it’s the performance. The type of performance that we showed today is similar to what we want from the team. I think today was the best day in terms of expected goals, we think. It was a very good game in terms of chances created. We are very happy with that, as well.

Cincinnati shutout San Jose 6-0 at home with Alvaro Barreal opening the scoring in the 44th. Brenner doubled the lead in the 47th and Luciano Acosta added a penalty in the 71st minute. Cincinnati’s Yuya Kubo made it 4-0 in the 77th with Brenner scoring in the 90th and converting a penalty five minutes into stoppage time. Cincinnati goalkeeper Roman Celentano made five saves to keep the clean sheet.

“Strong mentality,” Cincinnati coach Pat Noonan said. “We’ve got players stepping up, whether it’s vocal leadership or guys starting games and understanding that we have some healthy bodies and some good competition. It’s a hungry group and a mentality within the group that allows us to get through tough moments and tough stretches and not crumble and respond the right way. The guys in there are the reason we’re talking in a positive way.”

Philadelphia beat Orlando City 5-1 at Subaru Park. An own-goal put the Union up in the 39th with Mikkel Uhre doubling the lead in the 43rd. Daniel Gazdag converted a Philadelphia penalty in the 55th and Alejandro Bedoya made it 4-0 in the 63rd. Orlando’s Andres Perea scored in the 75th, but it was Jack Elliott finishing off the Philadelphia goals in the 87th minute.

Chicago beat Inter Miami 3-1 at Soldier Field. John Duran put the Fire up in the 40th and Xherdan Shaqiri made it 2-0 in the 64th. Inter’s Gonzalo Higuain converted a penalty in the 77th, but Duran scored again for Chicago in the 87th minute.

“Getting through tonight was a must as far as keeping some momentum, keeping some confidence going forward to the next four,” Chicago coach Ezra Hendrickson said. “And we just told them to play freely, play without fear; don’t worry about anything, just go out and play a game.”

Seattle shutout Austin 3-0 at home with Raul Ruidiaz scoring int he 12th and 34th. An own-goal made it 3-0 in the 68th with Sounders goalkeeper Stefan Frei making one save to keep the clean sheet.

FC Dallas beat LAFC 2-1 at Toyota Stadium. LAFC played a man down from the 13th with a red card to Ryan Hollingshead, taking the lead from a Cristian Arango goal four minutes into first-half stoppage time. Jesus Ferreira equalized for Dallas in the 78th, scoring again in the 81st minute.

“The message before the game was we wanted to see character,” Houston interim coach Kenny Bundy said. “We wanted to see team character and we wanted to see individual character. That message became even stronger at halftime where you’re down a man. Adjustments are going to be made on the other side to hopefully take advantage of that. I challenge them again, that was the message prior to the game. Now it’s even, it’s even bigger. So, to see the way that the guys worked unselfishly for the group, to see the way that players in positions that are not normally that defensive, supporting the team, it’s a great way to finish the game.”

Colorado beat Vancouver 3-1 at home after falling behind in the 9th minute to a Brian White goal. Gyasi Zardes equalized for the Rapids in the 21st with Diego Rubin converting a 33rd minute penalty and Jonathan Lewis scoring in the 75th.

Week 30 finished in Portland with the Timbers beating Minnesota 1-0. Dairon Asprilla scored the game’s only goal in the 61st minute while Portland goalkeeper Aljaz Ivacic made five saves for the shutout.

Photo by the Philadelphia Union