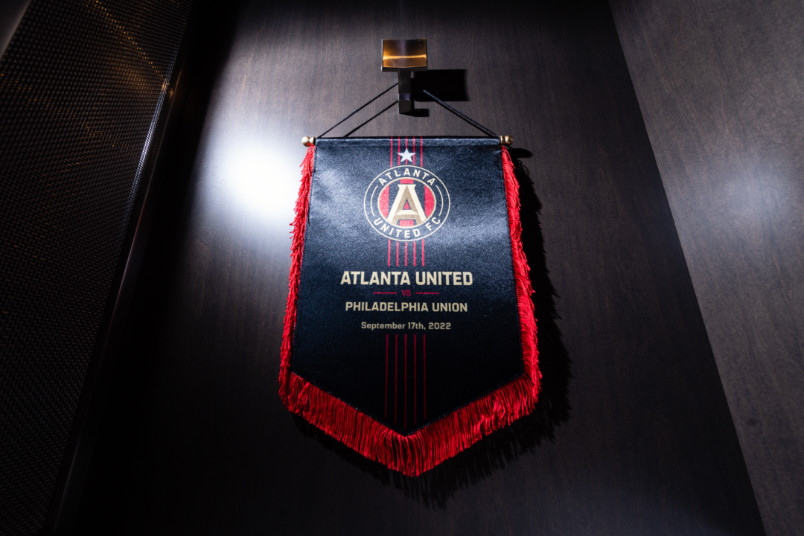 The MLS week 32 roundup starts with NYCFC shutting out the Red Bulls 2-0 at Yankee Stadium. Alexander Callens scored in the 1st minute and Santiago Rodriguez doubled the lead in the 23rd. NYCFC goalkeeper Sean Johnson made one save to keep the clean sheet.

“I knew the game was going to go this way,” NYCFC interim coach Nick Cushing said. “We played some really good football, but we also showed we can do the other side of the game. We can fight, and we can defend, and we can win first and second balls.”

Atlanta and Philadelphia finished 0-0 at Mercedes-Benz Stadium. Atlanta put six shots on target to none for the Union.

“Obviously, we can’t be satisfied with the result because we felt that we should have won this one, as many others this season probably,” Atlanta coach Gonzalo Pineda said. “But this one hurts because this could have put us already in a playoff position temporarily and tasting that.”

“We had our chances,” New England coach Bruce Arena said. “That game, that was going to be a 1-0 game. I told our team that at halftime. We had to beat a team, to make the play, and we didn’t. We had a couple chances in the first half, probably the better chances. And second half, I’d ignore the last 15 minutes because we were chasing the game and they really got at us. But we had our chances, but on the night, give them credit. They made the plays that made a difference.”

Orlando City beat Toronto 4-0 at Exploria Stadium. Orlando went up from a Facundo Torres goal in the 9th and Ercan Kara made it 2-0 in the 22nd. An own-goal extended the lead in the 47th and Tesho Akindele finished off the scoring in the 84th. Pedro Gallese needed three saves for the clean sheet.

Charlotte won 3-2 at Chicago, with the Fire taking the lead from a 3rd minute Mauricio Pineda goal and John Durna doubling the lead in the 30th. Charlotte’s Karo Swiderski pulled a goal back in the 68th and Nuno Santos equalized in the 76th. Swiderski scored for Charlotte six minutes into stoppage time.

Sporting Kansas City beat Minnesota United 4-1 at home, going up from a 31st minute own-goal. Erik Thommy made it 2-0 in the 41st and Eilliam Agada scored in the 45th. Minnesota’s Mender Garcia scored in the 57th, but it was Agada finishing off the goals for Sporting in the 81st minute.

FC Cincinnati came back to beat Real Salt Lake 2-1 on the road. RSL took the lead through Miakel Chang in the 35th, but Brenner equalized for Cincinnati in the 44th and scored again in the 76th minute.

“This is about our group continuing to find ways to win meaningful games,” Cincinnati coach Pat Noonan said. “And tonight, was another example of I think a group that senses and tastes the opportunity and they closed out the game in a way where you can tell things are different. So, I’m very pleased with their approach and their confidence and finding ways to win.”

Vancouver beat Seattle 2-1 at BC Place, taking the lead in the 29th from a Pedro Vite goal with Julian Gressel scoring in the 37th. The Sounders pulled a goal back with Will Bruin scoring in the 89th minute.

The Galaxy beat Colorado 4-1 at home. LA went up when Gaston Brugman scored in the 22nd, with Raheem Edwards adding a goal in the 28th and Chicharito Hernandez making it 3-0 in the 31st. Brugman scored again in the 52nd, with the Galaxy playing a man down from the 62nd after Douglas Costa saw red. Colorado’s Sam Nicholson scored a minute into stoppage time.

San Jose and FC Dallas drew 1-1 at PayPal Park. Jader Obrian gave Dallas the lead in the 16th with Jeremy Ebobisse equalizing from the penalty spot in the 24th minute. Dallas’s Paul Arriola saw red in the 83rd minute.

On Sunday, Columbus and Portland drew 1-1 at Lower.com Field. Kevin Molino scored for the Crew in the 36th and Santiago Moreno equalized for the Timbers five minutes into stoppage time.

Inter Miami came back to beat DC 3-2 at Audi Field. Christian Benteke put DC up in the 22nd with Leonardo Campana scoring for Inter in the 39th and 53rd minutes. Taxi Fountas equalized for United in the 57rh but Gonzalo Higuain scored for Inter four minutes into stoppage time.

Week 32 ended in LA with LAFC beating Houston 3-1. Carlos Vela put LA up from the penalty spot in the 8th with Corey Baird equalizing for the Dynamo in the 24th. Vela converted another penalty four minutes into first-half stoppage time and Ryan Hollingshead extended the lead in the 52nd.