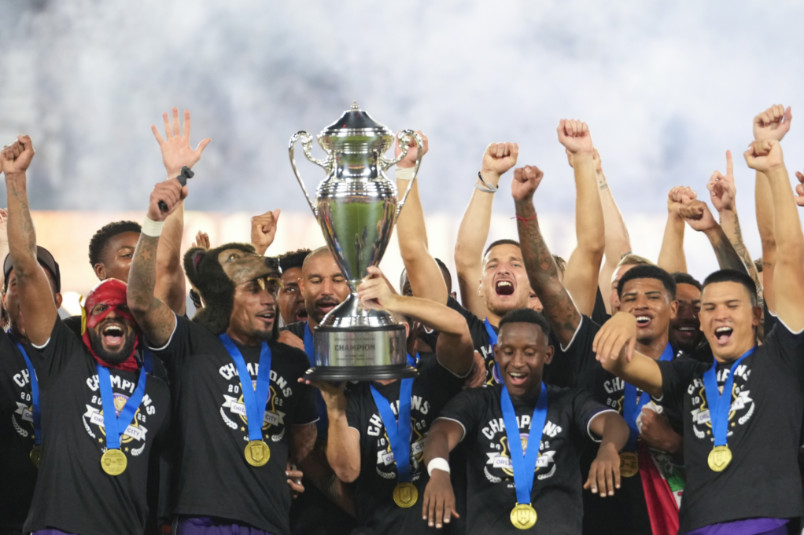 By Charles Boehm – WASHINGTON, DC (Sep 8, 2022) US Soccer Players – It was a cup final matchup worthy of a Hollywood script writer. A fierce, plucky underdog from the USL Championship, only the second lower-division side to advance this far in this century, still stung by its acceptance and subsequent removal from MLS expansion. A well-supported favorite and host with a history of underachievement and a flair for drama in the land of Disney. A backdrop of rising rivalry between once-partnered leagues in the wake of MLS launching its new reserve competition.

The 2022 Lamar Hunt US Open Cup gave us all plenty to consider. When Orlando City took down Sacramento Republic 3-0 in Wednesday’s clash at sold-out, rain-soaked Exploria Stadium, it was an expected result. Yet it and the 86 other matches that led to that culmination offered an entertaining spectacle to underline the value of the nation’s oldest tournament.

For just the second time in its century-plus history, the Open Cup will reside in Florida. Two goals from Facu Torres, a Young Designated Player who cost Orlando millions, and another by Benji Michel, a hometown homegrown, in the final 20 minutes broke down Sacramento’s stubborn resistance and delivered OCSC the first trophy since its entry into MLS.

“We are very proud of the community, of the club, the fans, the players, and [to] have this opportunity to bring this trophy against a very tough rival, very competitive match,” said Orlando head coach Oscar Pareja postgame. “Until 50, 60 minutes it looked like a really tough final. After that we could open the score, it just gave us more confidence against the block that they have very strong in the back. So we’re good. Proud. Congratulations to all involved with this trophy. Nothing else. We are very grateful for this, for tonight, and will hope to continue and just give a lot of joy to the community.”

It was the clock striking midnight on one of the more compelling Cinderellas the Open Cup has seen in its modern era. Tenacious, organized, intelligent, Republic FC defied Orlando’s heavy home-field advantage and carved out some decent chances, staying right in contention until their legs tired, focus drifted, and a few costly errors ensued.

“The guys did our club, our city, extremely proud, I thought. For seventy minutes we held our own, we played the football we wanted to play,” said coach Mark Briggs. “Maybe could have created or been a little bit more progressive in the final third. But then Torres, you make mistakes against players, teams at this level, and you get punished. Ultimately, that’s what happened. So it’s a hard one to take right now, to be honest, but just extremely proud of the guys and what they’ve achieved in reaching this final.”

Sacramento having to play a league match at Louisville City on the weekend while Orlando rested, thanks to MLS postponing their game at Inter Miami, felt like one more advantage for the side with more resources to begin with. Briggs declined to entertain that, noting that nearly the entire starting XI was rotated from the loss to Louisville.

“We play lower-level football. We’re a second-division team, and that was our schedule,” he said. “If you look at the team on Saturday and you look at the team now, only Lee Desmond played for 25 minutes. So that’s our schedule, that’s a hurdle we had to overcome. And the guys overcame it. And the guys gave everything out there tonight. So it is what it is. That’s what we have to deal with. So yeah, we’ll just leave it there.”

Briggs also took the high road when asked about the spying accusation on Sacramento’s matchday-1 training session, which is under investigation by US Soccer and denied by Pareja during the press conference.

Sacramento did itself and its league enormous credit, and at a timely moment as USL looks to assert itself as an independent entity. The giant-killing Quails beat three MLS opponents on their path through the bracket and never trailed until the final. They’re just the fourth lower-division side to advance that far since MLS launched in 1996 and the first since the Charleston Battery in 2008.

That run can only bolster their league’s efforts to gain a berth in the newly expanded Concacaf Champions League format. It also reminds everyone of the vibrant soccer scene in that city. Meanwhile Orlando, a club that’s at times struggled in the topflight since its own storybook climb from USL to MLS, can savor a long-awaited breakthrough and a debut on the international stage next year.

After so many years of the topflight dominating the later rounds of this event, the presence of a non-MLS team in the final brought fresh intrigue and interest in 2022. For decades the Open Cup has been an underrated joy, and it may only be getting better.