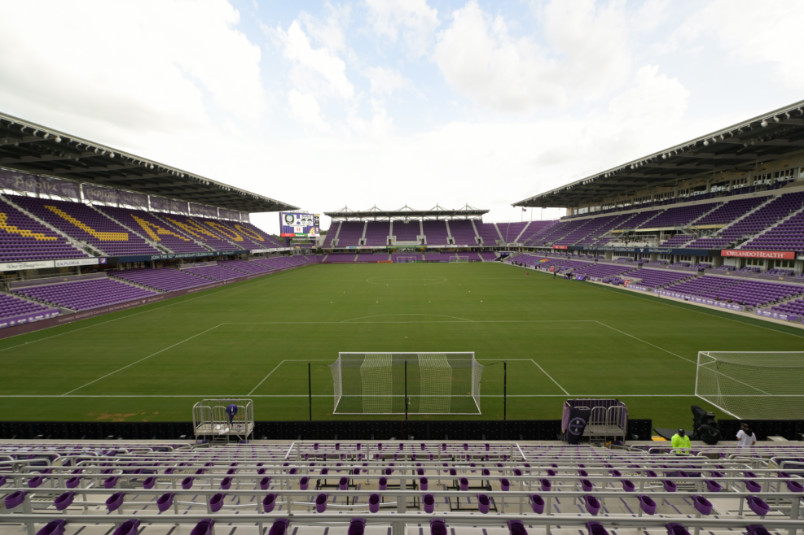 By Jason Davis – WASHINGTON, DC (Sep 30, 2022) US Soccer Players – Major League Soccer’s weekend schedule will deliver the 33rd game of the season for 24 of its 28 teams. Among that group are teams already eliminated from playoff contention, some still mathematically alive but facing a steep uphill battle for a playoff place, clubs on the precipice of confirming a postseason berth, and a small handful of teams jockeying for seeding or chasing the year’s regular season points title. Two games left to sort their seasons.

That leaves four outliers. There’s a group of four Eastern Conference teams with a game in hand, potentially a blessing or a curse with their playoff destinies on the line. Orlando, Inter Miami, Charlotte, and Columbus will play game 32 this weekend. A midweek pair of matches pitting Charlotte against Columbus and Inter Miami against Orlando on October 5 will set all 28 MLS teams up for Decision Day on Sunday, October 9, to close the season and settle all playoff-related business.

The game in hand for those four teams could upend the race for the final playoff spots in the Eastern Conference. Orlando, Miami, and Columbus sit 6th, 7th, and 8th, respectively, separated by three total points. Charlotte is 10th behind Atlanta United but remains in the hunt for a playoff berth.

Wins by any combination of those teams this round will set up do-or-die level games next Wednesday. Decision Day is guaranteed to provide the most drama by volume, but October 5 could pack just a pair of games with more of it per match. The extra game feels like possible salvation. It also means playing 90 more minutes of high-pressure soccer four days before the finale. Of course, all four would prefer to take the pressure off the final day by maximizing their points in the two games on the schedule before it.

Orlando can clear the playoff hurdle before October 9 if they win on Sunday and on Wednesday. The Lions might even have a chance to jump into the top four and earn a home playoff game if they can beat NYCFC this weekend.

They will travel to New Jersey for the showdown with the reigning MLS Cup champions NYCFC at Red Bull Arena, with Yankee Stadium unavailable to the home team. NYCFC has lost twice as the home team in Harrison this year, they beat the Red Bulls 1-0 as the away team back in July, a fact that will boost Orlando’s belief that they can take those three points.

NYCFC can book a playoff spot with a victory and won’t be lacking motivation. A win in the Campeones Cup over Atlas and a derby win over the Red Bulls at Yankee Stadium last weekend have buoyed hope that the club is picking up steam at just the right time.

Orlando has one of the hottest attacking players in the league in Facundo Torres. Torres has four goals in his last five matches and needs to be dangerous again for the Lions to triumph in Jersey and head into next week with just one result to get themselves into the playoffs.

Inter Miami is the other Eastern Conference club currently above the playoff line with a game in hand. Though the ambition for Inter goes well beyond simply making the playoffs, that they’re still in the hunt and ultimately control their fate is a major statement this season. It’s a credit to general manager Chris Henderson and head coach Phil Neville.

In order for Miami to get to the playoffs and earn that credit, it needs to finish the regular season strong and give the Eastern Conference chasers no room to make a move. Inter’s final three games present a significant challenge.

First is a trip to Toronto with TFC in the role of spoiler. Next is midweek at Orlando, where City could be playing for a home playoff game, and a visit by Montreal on Decision Day, Toronto looks like the club’s best chance at full points. Miami could be without US international DeAndre Yedlin, who suffered an ankle injury on duty with the USMNT and is 50/50 to play in Toronto, according to Neville. Brek Shea is back for Miami and Alejandro Pozuelo should have some extra motivation to play well against his former team.

Meanwhile, Columbus needs help. The Crew’s game in hand is negated by Orlando and Miami’s, meaning Columbus will also need other results to advance to the postseason. Before the trip to Charlotte on Wednesday and the Decision Day match-up against Orlando, the Crew faces off against the Red Bulls at Lower.com Field.

If ever there was a time for Caleb Porter’s team to start turning draws into wins, it’s now. A home draw against New York would be a near-disaster with two games left. A tendency to drop points, particularly by losing leads late and missing out on a win, is the overriding theme of the Crew’s season. Columbus has just two wins since August and a total return of 12 points in those ten games thanks to six draws.

The Crew won’t be at full strength against the Red Bulls, one of the league’s best road teams. The league suspended forward Cucho Hernandez on Thursday for “use of offensive language” during a match against Portland on September 18. Hernandez proved a savvy summer signing for the Crew and is far and away the club’s biggest goal threat. Getting a win against the relentless Red Bulls is going to require someone else stepping up in his absence.

For Charlotte, the math is worse. The expansion team will get a chance to take points off of the Crew in midweek and the game in hand does present a chance to make up ground if it can seize the opportunity.

But that’s only if Charlotte remains in contention after this weekend. On Saturday, they host Philadelphia, perhaps the league’s best team and undoubtedly the league’s best defense. The Union can lock down the East’s top seed and stay in the chase for the Supporters’ Shield with a win.