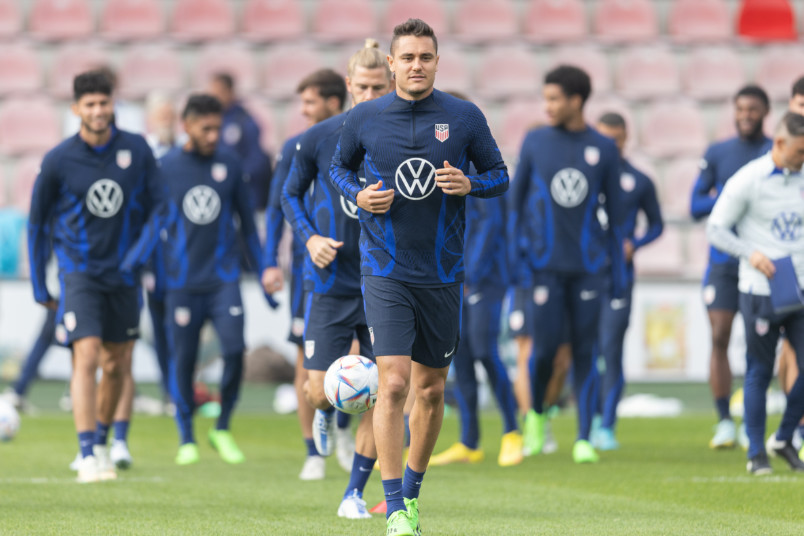 Thursday’s soccer news starts with things to consider in advance of the USMNT playing Japan in Dusseldorf tomorrow morning (8:25am ET – ESPN2). The situation for the teams outside of Europe is playing games that have to count as coaches work on figuring out World Cup rosters. For USMNT coach Gregg Berhalter, that once again puts the focus on the best personnel for his tactical plans to work.

Complicating that is player availability, with Berhalter having to adjust his initial roster due to injuries. While no team can expect to be at 100% in any window, the USMNT has had to work through multiple injuries to key contributors. Gio Reyna returns for the USMNT with the potential for playing time with Tyler Adams, Weston McKennie, and Christian Pulisic. With Brenden Aaronson showing what he can do at Premier League level, the expectation is that the USMNT can stress creative play in its two September friendlies. They should have plenty of options, with players comfortable moving the point of attack and switching approaches en route to goal.

Defensively, Berhalter needed to replace two injured players before the start of camp, bringing in Mark McKenzie and Erik Palmer-Brown for Cameron Carter-Vickers and Chris Richards. They join a group that has established itself over the course of qualifying. DeAndre Yedlin, Walker Zimmerman, Aaron Long, and Reggie Cannon provide the experience with all of them with at least 27 caps. Add to that the creative play of Sergino Dest and emerging players like Joe Scally and Sam Vines, and once again there are multiple tactical approaches.

That many options can create its own issues for a technical staff that needs to figure out how to initially address Wales, England, and Iran. Wales is in Nations League action later today at Belgium and England plays Italy in the Nations League on Friday. Iran faces Uruguay in a friendly at noon on Friday, all providing the kind of scouting opportunities that could impact tactical and roster decisions.

How much of an impact September has will quickly become the question. Things will undoubtedly change for all the teams involved, shifting what their opponents might have been tempted to take for granted at the start of the September window.

Moving to the Nations League Showcase, FC Cincinnati beat Chivas 3-1 at TQL Stadium. Trailing from the 20th minute, Yuya Kubo equalized for Cincinnati in the 53rd with Calvin Harris scoring in the 69th minute. Brandon Vasquez finished out the scoring in the 77th minute.

“I thought it was a strong performance from the group after a relatively slow start,” Cincinnati coach Pat Noonan said. “Once we figured out our defensive shape and how we wanted to press, I thought that guys did a really good job and turned that slow start into a good closing leading up to the delay and then the 10 minutes leading up to halftime. I thought we dealt well with the circumstances and had a good mentality. Then the second half, I thought was across the board really good. Some promising minutes from a lot of different guys.”

Nashville and Club America drew 3-3 in regulation with Nashville winning 4-2 on penalties. Josh Bauer put Nashville up in the 6th and Luke Haakenson doubled the lead in the 14th. Club America responded with goals in the 38th and 51st. Nashville retook the lead when Jack Maher scored in the 89th, but Club America equalized five minutes into stoppage time. Both teams saw their attempts saved in the first round of penalties, with Club America failing to convert in the third round.

Japan vs USMNT at 8:25am on ESPN2. Fox Deportes has Iran vs Uruguay at 12pm. Nations League on FS2: Georgia vs North Macedonia at 12pm. FS1 has Germany vs Hungary at 2:45pm. Liga MX on TUDN: Necaxa vs Mazatlan at 8pm and Puebla vs UNAM Pumas at 10pm.