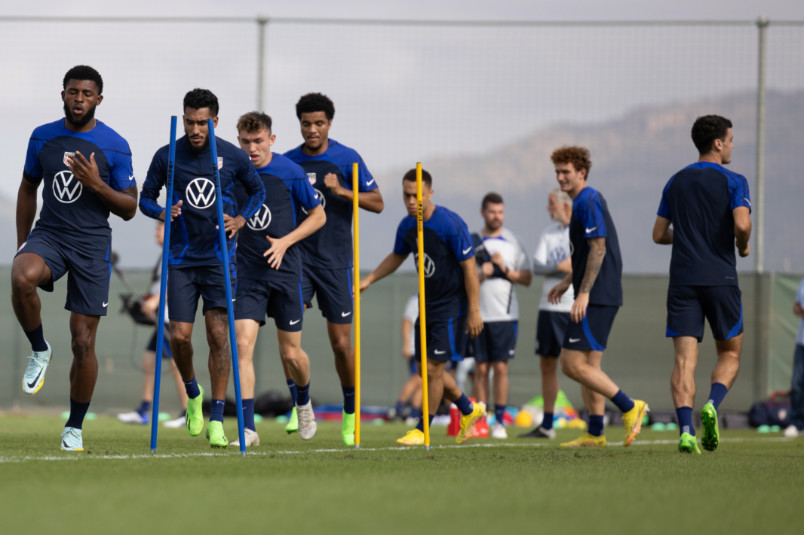 Monday’s soccer news starts with a preview of tomorrow’s Saudi Arabia vs USMNT friendly in Murcia, Spain. The USMNT’s 2-0 loss to Japan in Dusseldorf raised questions, but in a friendly window it’s difficult to know what needs underlining after 90 minutes. While it’s easy to compliment Japan for keeping to a strategy, the USMNT normally doesn’t finish games with no shots on goal. That may be the biggest carryover, quickly coming up with ways to address production.

It was shots period against Japan, finishing with four to Japan’s 16 and with Japan putting half of theirs on target. Again, while the temptation is to pile on the cliches following a disappointing result, there’s a real question for what does and doesn’t resonate moving forward. The USMNT has the pieces to power an attack capable of navigating their World Cup group. It’s getting them on the field at the same time and in a tactical setup that allows for opportunities.

Saudi Arabia’s 0-0 draw with Ecuador on Saturday in Murcia finished with them putting two of five shots on goal to Ecuador’s six from 11. Saudi Arabia hasn’t scored in three consecutive friendlies, losing the previous two 1-0. That should challenge the US attack to show that it can recover quickly, putting the focus on taking any available option to get shots on frame. That means from distance as well as seeing what can happen from creative passing moves in the box.

Meanwhile, the USMNT defense is without Reggie Cannon and needing to address how the backline absorbs pressure. Turning the first game of the September window into a one-off means showing what this squad is capable of in the last game. While there’s not a lot of value in talking about any of the teams playing friendlies sending messages or suggesting form when there’s over a month of league games between now and the start of the World Cup, perceptions matter.

Rounding up up the rest of the World Cup group B teams, Wales lost 1-0 at home to Poland on Sunday in the Nations League to a 57th minute goal. Wales took 13 shots to Poland’s 6, with both teams finishing with three shots on goal. It was the second consecutive loss in the September window, with Wales losing 2-1 at Belgium on Thursday. England hosts Germany later today after losing 1-0 at Italy on Friday to a 68th minute goal. Iran beat Uruguay 1-0 in Austria in a friendly on Friday with Mehdi Taremi scoring in the 79th minute. They play Senegal on Tuesday in Austria.

Moving to the only game on the MLS schedule, the LA Galaxy winning 3-2 at San Jose. Chicharito Hernandez put LA up in the 12th with Gaston Brugman doubling the lead in the 42nd and Hernandez scoring again in the 69th. San Jose’s Cristian Espinoza converted a penalty in the 74th and Nathan scored four minutes into stoppage time.

“Mindset is good. Guys are confident,” LA Galaxy coach Greg Vanney said. “I think that’s been building, to be honest. I mean, even in the stretch where we were getting draws, in many of those games we were positioned to win at one point in those games. It’s just about finishing opportunities when we have opportunities. We still left a few on the table, maybe even tonight, to get a couple more. But, we’ve been more solid. Especially in first halves, giving ourselves the lead. And then doing a good job in the second half, generally speaking, managing games.”

The friendlies start with Canada vs Uruguay on Fox Deportes at 12pm. Saudi Arabia vs USMNT is on FS1 at 2pm. beIN Sport has Peru vs El Salvador at 8pm. Honduras vs Guatemala is on Fox Deportes at 9pm. Univision has Mexico vs Colombia at 10pm. Nations League on FS2: Switzerland vs Czech Republic at 2:45pm ET.