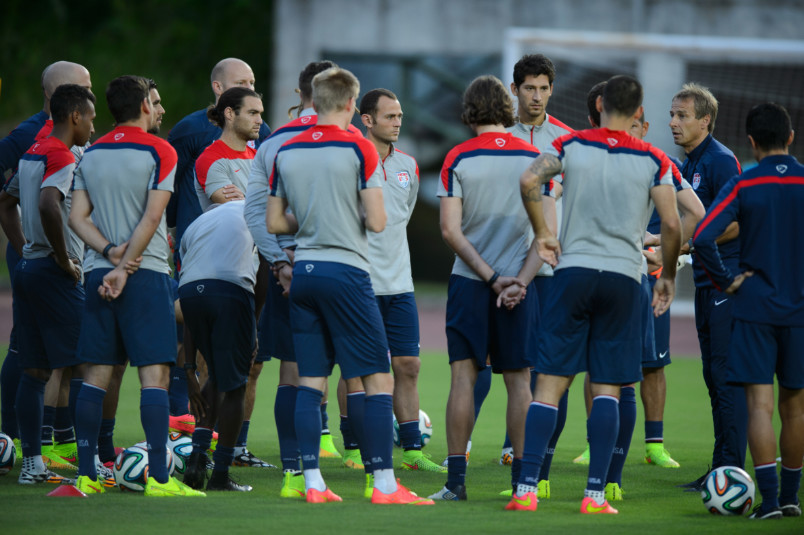 By Jason Davis – WASHINGTON, DC (Sep 28, 2022) US Soccer Players – In less than two months, the USMNT will return to the World Cup and the great stage it presents. The 26 players that USMNT head coach Gregg Berhalter selects to play for the nation in Qatar will carry the weight of significant responsibility, keenly aware that there’s no guarantee they’ll get another chance to play in a World Cup.

Back in 2014, head coach Jurgen Klinsmann took a team of 23 to Brazil to play Ghana, Germany, and Portugal in the group stage. On paper, the Americans were underdogs to emerge from the tournament’s consensus “Group of Death.” An opening game win over Ghana and a draw against Portugal were enough to put the US into the knockout round where they took Belgium to extra time before exiting in the round of 16.  Eight years on from the 2014 World Cup, nine of the players from that USMNT squad are now retired.

Brad Davis hung up his cleats in 2016 after a season with Sporting Kansas City, a two-time MLS Cup winner with Houston. Real Salt Lake goalkeeper Nick Rimando called it a career at the end of 2019 with six All-Star appearances and a league MVP. Club teammate Kyle Beckerman followed in 2020 after an MLS career that spanned 21 seasons and an MLS Cup win. Clint Dempsey’s Hall of Fame career ended with the Sounders in 2018. DaMarcus Beasley played in his fourth and final World Cup in 2014, joining Houston later that summer and retiring as a member of the Dynamo in 2019.

The USMNT’s standout performer in the round of 16 loss to Belgium, goalkeeper Tim Howard retired from MLS as a member of the Rapids in 2019. Chris Wondolowski delayed his retirement to spend one more season with San Jose in 2021, leaving as the league’s all-time leading scorer. Matt Besler contributed to Austin FC’s first season after 12 years in Kansas City, retiring last season.

Jermaine Jones jumped to MLS in the years after starring in the US midfield in Brazil and is now making his way through his coaching education. One significant theme that runs through the post-playing careers of those that have retired from the 2014 squad is their continued involvement in the game.

Beasley is launching a club in his native Indiana. Beckerman coaches college soccer in Utah and is part of a group launching an NPSL team in Annapolis, Maryland. Dempsey is now working in television. Howard is a part-owner of Memphis 901, coming out of retirement in 2020 to play in four games. Wondolowski is on the staff with the San Jose Earthquakes.

But a majority of that USMNT squad are still playing. Two even remain with the same club they played for when they took part in the World Cup eight years ago. That pair is Graham Zusi of Sporting Kansas City and Michael Bradley of Toronto FC. Both are key cogs for their clubs deep into their 30s and have given no indication they intend to call it a career soon. Zusi has only played for Sporting Kansas City and will suit up for his 15th year in Kansas City in 2023. Bradley is helping to usher in yet another era of Toronto FC, playing in a team flush with new talent from abroad and from within TFC’s development system.

The rest of the 2014 team that is still playing have made moves, sometimes more than a few. The most traveled is midfielder Mix Diskerud. Diskerud was 23 in 2014, a precocious creative player based in Norway with Rosenborg. Klinsmann tapped Diskerud to add panache to the midfield group but did not use him in four USMNT matches.

After the World Cup, Diskerud joined NYCFC for the club’s expansion campaign. Manchester City purchased him from its sister club in 2018 and he went on a series of loans. Between stints in Sweden, Diskerud played for two years in South Korea. At the end of the 2020 season, he signed with Omonia Nicosia in Cyprus. He played a significant role in helping Omonia reach this year’s Europa League, where his club is in a group with Real Sociedad, Manchester United, and Sheriff.

Aron Johannsson was also a 23-year-old first-time World Cup participant in 2014. Born in Alabama and raised in Iceland, Johannsson caused waves when he chose to represent the United States over Iceland in 2013. He went to Brazil as a mobile, dynamic goalscorer set to back up starter Jozy Altidore. Johannsson entered for Altidore as a substitute in the opening group stage match against Ghana and played 68 minutes in a 2-1 victory.

Now 31, Johannsson is plying his trade back in Iceland with Valur. An unfortunate series of injuries slowed his career following a move from AZ Alkmaar in the Netherlands to the Bundesliga’s Werder Bremen. Johannsson also played in Sweden for Hammarby, former home to Charlie Davies and Gregg Berhalter’s first stop as a head coach, and for Lech Poznan in Poland.

The oldest player from the 2014 team still active is goalkeeper Brad Guzan. He’s working his way back from injury with Atlanta United, turning 38 earlier this month with the reminder that careers are different for keepers.

It’s no surprise that the younger players in that group are still playing at high levels eight years on. Julian Green was the youngest player on the squad and is in his sixth season with Greuther Furth in Germany. Green’s club has moved between the top two divisions and is currently a 2.Bundesliga side. Green helped them reach the Bundesliga in 2020-21 and played 1,054 minutes in the top division last season.

DeAndre Yedlin, then 20, is still a major part of the USMNT picture at 29. Against Saudi Arabia on Tuesday, Yedlin collected his 75th cap at the senior level.

John Brooks was 21-year-old when he made the US World Cup squad. Brooks famously scored the winning goal against Ghana in the group stage opener. In the years since the German-born American spent a decade playing in the Bundesliga before joining Portuguese power Benfica as a free agent this summer.

Timothy Chandler is a contributor to Eintracht Frankfurt at the age of 32. 34-year-old fullback Fabian Johnson is unattached, having played the entirety of his career in Germany. Johnson was a standout at a position notoriously difficult for the USMNT, left back.

A trio of 2014 vets, Alejandro Bedoya, Omar Gonzalez, and Geoff Cameron are also in MLS eight years later. Bedoya is a stalwart and team captain for one of the best teams in the league. The midfielder’s leadership is a key component in the winning culture of the Philadelphia Union. Gonzalez won his third MLS Cup with the Galaxy later in 2014, eventually moving to Toronto and this season the New England Revolution. Cameron is a key part of an FC Cincinnati team on the verge of its first MLS Cup playoff appearance. His nine-year career in England is an example for young American players hoping to play in the cradle of the game.

That leaves Jozy Altidore. The USMNT’s third all-time goalscorer suffered a muscle injury in the opening half against Ghana. He would go on to help turn Toronto into one of the best teams in MLS history. After half a season in New England this year, Altidore is now continuing the tradition of American internationals in Mexico playing for Puebla of Liga MX.