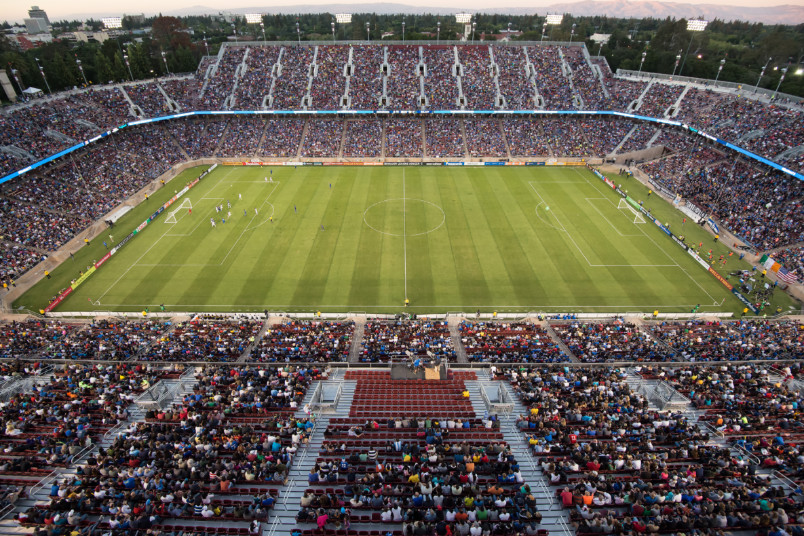 By Jason Davis – WASHINGTON, DC (Sep 23, 2022) US Soccer Players – As American soccer rivalries go, there aren’t many with more history than the California Clasico. The match-up of the Los Angeles Galaxy and San Jose Earthquakes goes back to the earliest days of MLS, a standard bearer for the league.

In MLS’s early years, Los Angeles versus San Jose was a battle of perennial cup contenders. The Galaxy established itself as an MLS power, while the Quakes won multiple championships in the league’s first decade. Things have changed since those halcyon days of Northern and Southern California trading MLS Cup titles, but there’s no discounting the importance of these games to both fan bases.

The rivalry has enough pull in the Bay Area that the Quakes move the game away from their usual home. 18,000-seat PayPal Park, to the much larger confines of Stanford Stadium. A power outage due to wildfires in the area meant moving the game from June 25 to the September window. Because of the date change, the Quakes and Galaxy will be the only MLS match happening during the FIFA international break.

This edition of the Clasico will matter a little more to the Galaxy than to the home-standing Quakes.

San Jose’s motivations come down to bragging rights, avoiding the Wooden Spoon, and individual players taking a chance to prove they should be around for the next version of the team in 2023. The Quakes are once again in-between regimes, with former FC Dallas and current USMNT assistant Luchi Gonzalez set to take the helm next season.

San Jose has promising homegrown talent, including J.T. Marcinkowski, Cade Cowell, Niko Tsakiris, and Cruz Medina. If the club makes the effort, it has the potential to be one of the best young squads in the league. Hiring Gonzalez appears to be a push in that direction. Before taking over FC Dallas’s senior team, Gonzalez ran the club’s renowned academy. MLS is a forgiving league rife with mechanisms for getting better quickly, but San Jose has a lot of work to do.

Right now, they can place an exclamation mark on a tough season by beating the Galaxy in front of a big crowd. If that also prevents the Galaxy from reaching the postseason, even better from the home team’s perspective.

The Galaxy will arrive at Stanford Stadium desperate to claim three points from their old rivals mostly because those points are crucial for returning to the playoffs. To call the Galaxy’s season “up and down” does an injustice to the wild swings in momentum the club has experienced. While it hasn’t been linear in Los Angeles, there has been progress. In just the last week, the Galaxy hit both the up and the down, though not in that order.

Last Wednesday, the Galaxy imploded in Vancouver, dropping a humiliating 3-0 result to the Whitecaps. Coach Greg Vanney read his players the riot act in his postgame comments, questioned the team’s mentality, and declared that LA shouldn’t be in a position to miss the playoffs. The loss to Vancouver ended a six-game unbeaten streak, though that streak only netted two wins and left LA behind Real Salt Lake for the final playoff spot in the West.

Then the Galaxy dazzled against the Rapids in Carson on Saturday, winning 4-1 in a game that wasn’t that close. Summer signing Riqui Puig was the star of the show as he helped set up three of LA’s four goals. The victory lifted LA back into the playoff places, putting the club’s destiny in its hands.

But that destiny rests heavily on the trip north to face the Quakes. The Galaxy’s advantage over its rivals for the playoffs, RSL is the biggest threat, but Vancouver and Seattle could challenge, comes down to having an extra game left on its schedule. The California Clasico is that game. A win in Palo Alto would not only give LA a three-point lead over RSL, but it would also improve the club’s chances of holding onto the total wins tiebreaker if the two teams end level on points.

If the Galaxy needs extra motivation to sharpen its focus with the playoffs on the line, then the Clasico setting could provide it. Revenge should be part of it as well. The last time the two teams faced off, the Quakes shocked LA in Carson 3-2. Two early goals, separated by two minutes, doomed Vanney’s side.

The acquisition of Puig is proving to be a masterstroke. The former Barcelona academy product was highly touted in Spain, with the presumption he would move on to another European club in the quest to reach his potential. Instead, he chose LA. His arrival speaks to the latent potential of the Galaxy to regain its place among the league’s elite clubs.

It is apropos that the Galaxy needs to best its oldest rival n a big stage to take a massive step toward the playoffs. The California Clasico has been the scene of some of the most dramatic moments in league history. For the Galaxy, this is one of the biggest Clasico games in recent memory. The Quakes would love nothing more than to make it one of the most painful.