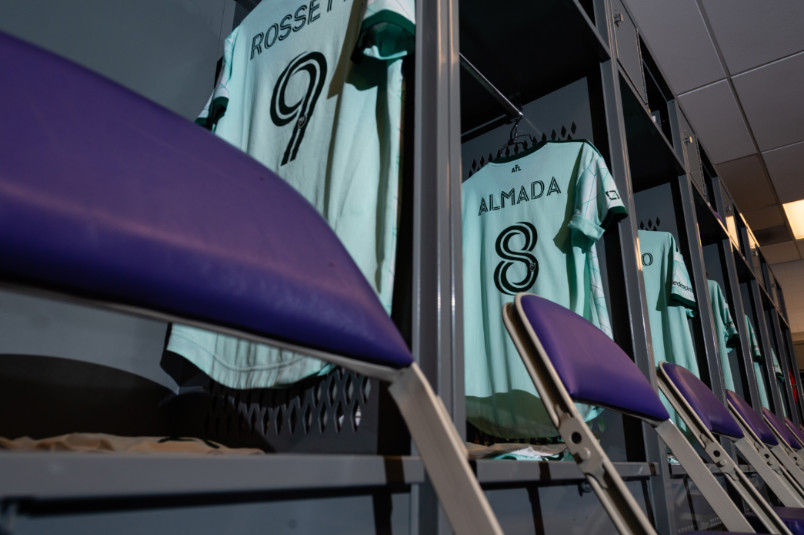 By Jason Davis – WASHINGTON, DC (Sep 16, 2022) US Soccer Players – The math is starting to matter. For more than seven months, weeks rolled by full of MLS games that everyone involved knew were important but lacked a certain desperate feeling. It takes 34 matches to complete an MLS season, and with seven MLS Cup playoff berths on offer in each conference, it’s difficult to gin up too much anxiety over any one of them.

Losing streaks weighed heavily, and no team who dropped points at home felt good about it. But crunch time always seems to have a way of sneaking up on you, and for a long time, it didn’t feel like crunch time. All of that is now over because crunch time is here.

More and more games now carry the possibility of determining a club’s fate for the postseason and a chance at the championship. Entering the midweek slate of games for Tuesday and Wednesday, the numbers told the story. A smattering of clubs were in line to confirm their playoff places via the type of “IF/AND/OR” statements that seem reminiscent of college entrance exams.

A few teams didn’t even need to take the field to book their place in the playoffs. With the caveat that seeding is up in the air in most cases and that seeding certainly matters, the New York Red Bulls now know they’ll be playing for a chance to win the MLS Cup when the regular season is over.

That’s because Orlando City fell to Atlanta United on Wednesday night 1-0 at Exploria Stadium in Orlando. The Lions’ loss ensures that no more than four teams can jump New York in the standings when the regular season wraps on October 9th. It’s unlikely that the Red Bulls will slip to seventh at the season’s end, but it’s now mathematically confirmed that seventh is as low as they can go.

New York tied the record with 13 consecutive seasons in the playoffs, set by Seattle last season. Achieving that feat will boost the club’s chase for a top-four spot and home-field advantage. Gerhard Struber has a young team anchored by veteran defenders Aaron Long and Kyle Duncan that played better on the road than at home this year but still wants to conduct its playoff run at home in the familiar confines of Red Bull Arena.

There is still some doubt whether the Sounders can reclaim sole possession of the consecutive seasons in the playoffs record by making the postseason this year. There are no IF/AND/OR statements that apply to them yet. The best the Sounders can say is that they’re still alive.

Of course, the math also works the other way. Wednesday night delivered the end of the San Jose Earthquakes season following a loss to Colorado. The Rapids kept their chances at the playoffs alive with the win. San Jose entered the match in Commerce City with its playoff life on the line and succumbed to the math.

Even if there wasn’t much hope left for the Quakes, elimination with multiple games to go pours salt into the emotional wound of a bad year. MLS is built to keep everyone in the race as long as possible, and bowing out in Week 31 says a lot about how poor your season was.

So San Jose will have to play spoiler. Others are using the lifeline provided by the midweek results as motivation to make the kind of do-or-die push for the playoffs that is a hallmark of the end of the MLS regular season. Maybe no team embodies the heady mix of desperation and hope like Atlanta United.

Atlanta knocked off Orlando on Wednesday via a Thiago Almada goal. After the game, United head coach Gonzalo Pineda pulled out one of the most well-worn cards in the coach’s deck, setting up an “Us vs The World” dynamic for the club’s final few games. Pineda declared the officials antagonists to Atlanta United, metaphorically circling the wagons as his team gears up for its final push.

The math for Atlanta is still daunting. It doesn’t help that United’s next opponent is the rampaging Union, a team that locked up a playoff spot weeks ago and is on the verge of claiming the top seed in the East. Montreal’s win over Chicago on Tuesday delayed Philadelphia’s enshrinement for at least one more match, but it’s coming.

Austin is officially in the playoffs after a 3-0 win over Real Salt Lake on Wednesday. The expansion club’s math kept it alive for the top seed in the West thanks to LAFC’s draw in Minnesota. Sporting Kansas City lived to fight for another match when the club’s 3-0 win combined with losses by RSL and the Galaxy to stave off elimination.

After the midweek dust settled, 13 of 14 teams in the Eastern Conference are still mathematically alive. Out west, only two teams have been eliminated, leaving 12 teams with a shot. The next round of IF/AND/OR scenarios is MLS parity at work.

Toronto’s playoff chances rest on beating Orlando and hoping other results go their way. Chicago and Charlotte will face off knowing that points are crucial to keeping the playoff flame flickering, even though the scorelines of other games could do them in regardless of the result at Soldier Field.

Needless to say, both Sporting Kansas City and Vancouver, a team that won what was effectively an elimination game over the Galaxy on Wednesday, head into the weekend knowing the end could come.

Next up for qualification is FC Dallas, the only club whose math looks promising for booking a playoff spot this weekend. A red-hot Dallas team led by Jesus Ferreira, Paul Arriola, and Sebastian Lletget will be in San Jose to face the eliminated Quakes. A win for FC Dallas combined with a loss or draw for the Galaxy against Colorado is enough.