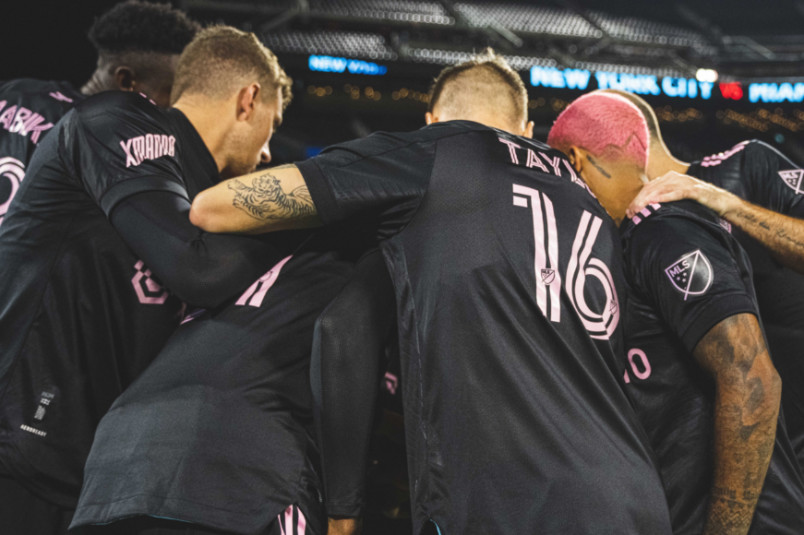 By Charles Boehm – WASHINGTON, DC (Oct 21, 2022) US Soccer Players – The scene was blue, both literally and figuratively, as Inter Miami CF’s season ended at New York City FC on Monday night. As the visitors trudged off the converted baseball field, they were suddenly shrouded in thick clouds of artificial fog, apparently churned out as part of NYCFC’s celebrations.

Miami’s first three years of on-field existence are now in the books. That’s a moment other expansion projects have used as an opportunity to take stock and reflect on what’s working and what isn’t. Thankfully for Inter, there appear to be clearer skies ahead than what they encountered in Queens.

The Herons’ season began in fairly gloomy fashion. Their competitiveness was already constrained by the unprecedented array of heavy fines and sanctions levied by the league last year for violations of MLS salary budget and roster guidelines in 2020. Incoming sporting director Chris Henderson oversaw a drastic winter overhaul that saw nearly 20 players move on, with even more newcomers arriving, headlined by DeAndre Yedlin’s return from his long stint in Europe.

The general conventional wisdom was that Henderson had made a promising start to a profound rebuilding process. Yet another year or two would probably be necessary for it to bear fruit.

Miami started the year on an 0-4-1 winless skid. By April, head coach Phil Neville was making significant tactical and personnel adjustments. The most dramatic paid off richly in the breakout performances of striker Leo Campana, a player on loan from Wolverhampton Wanderers.

Campana produced the first hat trick in club history to stun defending Supporters’ Shield holders New England 3-2 on April 9, Inter Miami’s first win of the season. Inter topped that by trekking to Seattle to upset the Concacaf Champions League-chasing Sounders 1-0 via a Robbie Robinson goal set up by Campana and Yedlin. Confidence and belief surged.

“This win was a really big one for us,” Yedlin said after beating the Sounders. “I think in this league especially, you have to be able to grind out those kind of wins, especially away from home. With this young group, it’s important that they know that we can do that. Now, we’ve done it in a really hard place to play against a good team.”

Then came a 2-1 comeback home win over Atlanta United on April 24, another Campana star turn, and a Rubicon moment for Neville’s squad. Younger players like Campana, two-way midfielder Bryce Duke, goalkeeper Drake Callender, fullback Christopher McVey, and former US youth international Indiana Vassilev, who returned on a second loan stint from Aston Villa, made strides under his tutelage. The rise of homegrowns Edison Azcona and Noah Allen hinted at a deep pool of local talent for the fledgling academy.

Yedlin earned plaudits as one of the league’s best right backs as the season progressed, finishing as Inter’s fourth-leading assist provider. The engine-room duo of Jean Mota and Gregore was ruggedly effective. Playmaker Alejandro Pozuelo arrived via a savvy midseason trade with Toronto FC that cost Miami a fraction of the 2020 MLS MVP’s actual value. Ariel Lassiter produced a career year. Then there was Gonzalo Higuain, returning to the lineup with renewed vigor and commitment, averaging nearly a goal a game down the stretch in what would be his final season.

It added up to the type of sturdy foundation that had been so elusive in the first two seasons. Seven wins in their last 12 matches bagged them a successful qualification for the postseason that had appeared unlikely just a few months prior. Along the way, Miami’s identity took shape around a new spirit of resilience and tenacity. The club coalesced into a collective greater than the sum of its parts. After finishing 19th, then 20th in the overall league standings in their first two years, the Herons came in 12th in 2022.

“This is a step forward from where we were last season,” said Neville on Monday. “I think we’ve changed the way people look at Inter Miami.”

Now he, Henderson, and their staff must plot the next leg in IMCF’s journey. Higuain’s retirement means at least one Designated Player slot will open up with the potential for a showcase signing. While media outlets on multiple continents have made Inter Miami their darling for transfer gossip, dating back years before they took the pitch or even had a crest, the locker-room bonds forged during 2022 may well prove more impactful down the line than any one or two high-profile reinforcements to come.

“We need to build on what we’ve got now. Then we add in the bits that are going to help us be successful,” said Neville. “I think we’ve proven that we can compete with anyone in this league on any single day. Last (winter) we added 19 players. I’d say if we added three players of real quality, that would make us a challenger for the top four. I think the players have been unbelievable. But we want better.”