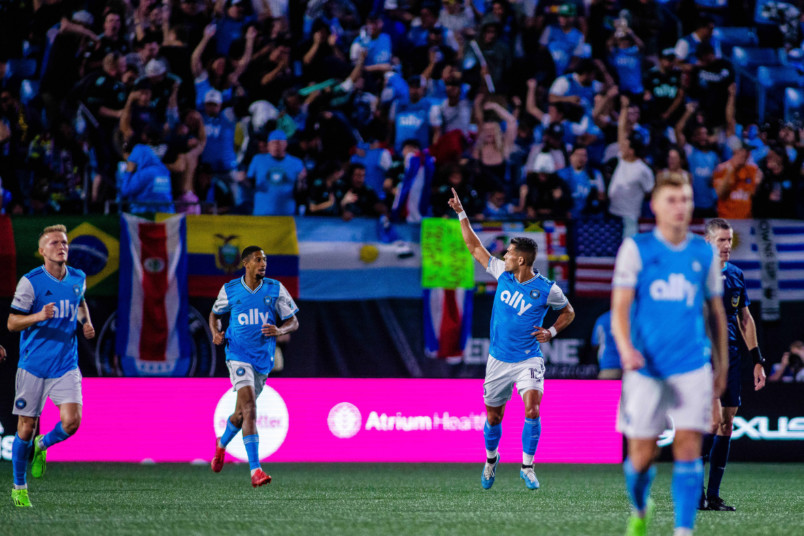 By Charles Boehm – WASHINGTON, DC (Oct 7, 2022) US Soccer Players – The idea of one prominent game being a microcosm of a club’s entire season tends to get overused. Still, it’s hard not to apply it to Charlotte FC’s 2-2 draw with the Columbus Crew on Wednesday night.

After starting the game on July 30, severe storms forced the suspension of the match in the 16th minute. A crowded calendar necessitated a resumption, complete with lineup and gameday roster continuity, from that same time stamp in the season’s final week. That meant the two teams found themselves fighting for their playoff lives in a way they hardly could’ve imagined back in late July.

A long-range chip from Crew star Lucas Zelarayan and a firm finish from Luis Diaz on either side of halftime put the hosts in a 2-0 hole at Bank of America Stadium. Needing a win to stay in playoff contention, Charlotte dialed up the drama with an immediate response to cut the lead to 2-1. A mad late surge followed as their impressive midweek crowd of over 34,000 spectators roared them on.

Charlotte got an injury time equalizer from Andre Shinyashiki that sent the place into bedlam even as the rally fell short. Afterward, central midfielder and North Carolina native Brandt Bronico adapted an old Vince Lombardi saying to explain it.

“In this case, ‘We didn’t tie the game, we just ran out of time,'” he told reporters. “That’s the way it goes sometimes, but I’m excited to see what we grow and build off and go into next season like.”

Surviving in the playoff race until the final days of the regular season is a sizable step for Charlotte, considering how the year started. A well-heeled organization that openly, and ambitiously compared itself to near-neighbors Atlanta United, they faced early issues, including player availability and a coaching change in late May.

“The Crown,” as Charlotte took to calling itself, was not done, however. Some midseason roster adjustments and quiet behind-the-scenes work from interim coach Christian Lattanzio coaxed improvement. That growth was epitomized by the late surge of three straight wins in September, including over Eastern Conference powers Philadelphia and New York City, that kept them in the postseason conversation.

The club clearly also remained in the local conversation. Charlotte consistently packed the lower bowl at Bank of America Stadium after breaking the league’s single-game, standalone attendance record in their home opener, and the atmosphere was apparent. Charlotte is on track to finish second in overall MLS attendance behind only Atlanta, and is also likely to finish top in merchandise sales.

In keeping with the Atlanta parallels, Charlotte reminded us that even the most established MLS conventional wisdom can be turned on its head. Even though the incoming MLS-Apple TV deal ensured it was a one-and-done enterprise, the club invested significantly in its regional television broadcasts. Most notable was the use of extra cameras and ‘mixed-reality’ and ‘augmented-reality’ graphics. That turned those unused sections into a canvas for scoreboards and other signage, along with statistics, “floating billboards,” starting XI graphics and the like projected on or around the pitch. It also gave CLTFC broadcasts a distinct look and feel in what may be a glimpse of sports television’s future.

Meanwhile, the passion and noise the home support created was evident. Among Eastern Conference clubs, only Philly, NYCFC, and Inter Miami racked up more points at home than Charlotte.

“You don’t really understand it until you come to a game,” Bronico told USSoccerPlayers.com on Thursday. “Everybody gets into the game, tailgates, the march to the stadium. I mean, it’s just so unique, it’s so incredible. I really don’t have words to describe it. Never did I ever think that soccer in Charlotte would be like this. It’s just amazing how far it’s come and how far the potential to keep going is, and how much we can really build, not only Charlotte FC, but the sport in the Carolinas.”

There are worse places to end up at this point in an expansion season. Lattanzio will reportedly soon be handed the head coaching job on a permanent basis. Ownership appears to be fully committed to further investment in the squad, and an open Designated Player slot is available to use towards that end.

While MLS history does contain examples of ‘sophomore slumps,’ Atlanta, LAFC, and Austin FC offer recent case studies of new organizations who kicked on to much bigger things in their second seasons. Charlotte can enter the winter with real optimism of following suit.