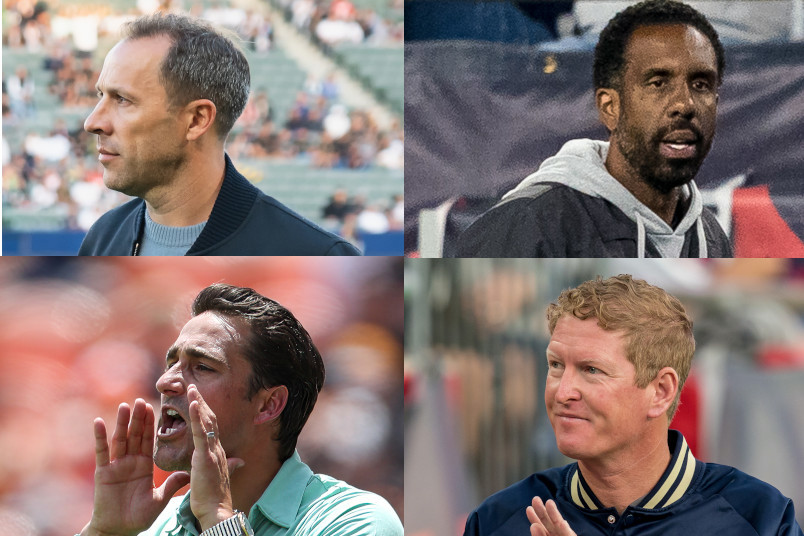 By Jason Davis – WASHINGTON, DC (Oct 5, 2022) US Soccer Players – The choice for the 2022 Sigi Schmid Coach of the Year Award in Major League Soccer may seem obvious. It’s just that the choice is not always the same, depending on who you happen to ask.

The 2022 MLS season delivered exceptional campaigns by a handful of teams. Some of those met or slightly exceeded expectations. Some far outperformed preseason predictions. It’s that dichotomy, and whether or not preseason expectations should factor in Coach of the Year voting, that will lead to disagreement over who most deserves the award.

Let’s get to the contenders at the top of the conference tables.

It only seems fair to start with the coach who led his team to the best record in MLS in 2022, LAFC boss Steve Cherundolo. Because of LAFC’s success as a young franchise, it’s easy to forget that Cherundolo is in his first season in Los Angeles. Yes, he was already part of the LAFC system, spending last year in charge of their reserve team, but that didn’t make the job easy.

Cherundolo navigated his first year in MLS like a steady, veteran hand. Despite some key absences for much of the season, perhaps most notably center back Eddie Segura, Cherundolo’s side nearly managed a wire-to-wire 1st-place finish. The club’s +29 goal differential speaks to a balance in the team fostered by its technical staff.

LAFC has the league’s best-expected goals differential (the difference between the chances it creates and those it conceded), a further bit of evidence that the team doesn’t sacrifice defense in its quest for goals. Cherundolo deftly managed his top players this year, while recognizing that key figures at the back like Diego Palacios and Jesus David Murillo needed to be on the field whenever possible.

The simple way to view the Coach of the Year Award is to see it as an award for the coach of the best team. Via the standings, LAFC is the league’s best team.

Except… MLS doesn’t use a balanced schedule and LAFC’s triumph in the Supporters’ Shield comes with that minor asterisk. There’s even a reasonable chance, should Philadelphia beat Toronto and LAFC loses to Nashville, that the Union will end up with the same number of points as LAFC. LAFC won the Shield in week 33 because Philadelphia can’t take control of the league’s tiebreaker (wins) no matter what happens on Decision Day.

Shield or not, Union boss Jim Curtin belongs in the Coach of the Year conversation. While the Union was the smart preseason pick to finish at or near the top of the Eastern Conference standings, the scope of the club’s season points to Curtin’s influence. Even if the expectation was a high seed and MLS Cup contention, and it was, this Union team exceeded expectations with how good it has been, particularly in the second half of the year.

If we’re going to point to LAFC’s goal differential as evidence of its balance, excellent in the attack, strong in defense, Philadelphia’s goal difference deserves a look.

Curtin’s team is currently +42, an astounding number that took a hit thanks to a lopsided 4-0 loss to Charlotte last weekend. Heading into the final two matches of the regular season, Philadelphia had a chance to challenge 2019 LAFC’s league record +48 differential. The Union’s number is so far ahead of the rest of the league that it’s jaw-dropping.

It’s tough to decide what is more impressive: The Union’s defensive record or the goalscoring that complimented that league-best defending.

Barring a disaster on Decision Day, the Union will be the only MLS team in 2022 to concede fewer than a goal a game. FC Dallas is second in MLS in that category, giving up ten more goals through 33 games. While the Union benefits from one of the league’s top goalkeepers in Andre Blake, there’s a team commitment to keeping the ball out the net that is linked directly to Curtin’s tactics.

Then there’s the attack, the league’s best going by goals scored heading into Decision Day. Curtin has gotten career years out of a long list of players and turned Michael Uhre and Julian Carranza into bona fide stars. What was already a strong defensive team is now the most feared attack in MLS. And all of that after a slow start to the season.

So about those expectations. LAFC, most people believed, was always going to be good. Philadelphia entered the year a presumed contender.

The two teams currently occupying 2nd-place in each conference are doing better than the preseason predictions. That makes their coaches clear Coach of the Year candidates.

Josh Wolff took an Austin team that finished 12th in the West last season and turned it into a legitimate MLS Cup contender. The improvement from year one of Austin FC to year two is remarkable. While a move up the standings seemed likely, few believed Austin would lurk near the top of the conference all year long.

In Montreal, Wilfried Nancy used his full preseason in charge to prime his team to challenge in the East. Of all of the candidates mentioned so far, none had more injury absences to navigate than Nancy. Squeezing his roster for all its worth allowed Nancy to find points where conventional wisdom suggested Montreal would struggle.

Now going into Decision Day, Montreal has a chance to jump the Union for the top seed in the East with a win and a Philadelphia loss.

With the candidate field already crowded with strong resumes, we can add one more from the “overachiever” category. Credit is due to Cincinnati’s Pat Noonan for turning the league’s worst team three years running into a playoff contender. Cincinnati isn’t in the playoffs yet, a win against last-place DC United on Decision Day gets the club in, and Noonan’s Coach of the Year chances could come down to the final week.