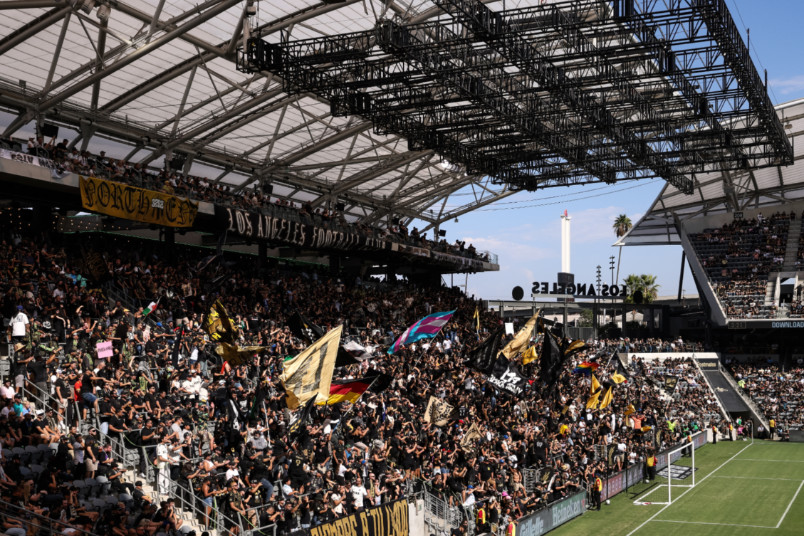 By Luis Bueno – RIVERSIDE, CA (Oct 19, 2022) US Soccer Players – For the second time in four years, one Los Angeles-based Major League Soccer club’s season will end at the hands of the other. In a nearly identical scenario to 2019, Supporters’ Shield holders LAFC will host the LA Galaxy in a Western Conference semifinal Thursday at Banc of California Stadium.

Last time, it was LAFC who ousted the Galaxy from the playoffs and laid claim to the city of Los Angeles. LAFC’s win, however, did not propel the club any further than 90 extra minutes as LAFC lost in the Western Conference final.

This year, both clubs each have their respective sights set on the game after the Western Conference final. MLS Cup or bust should have been LAFC’s motto since the club lost to Seattle in the 2019 playoffs. The Galaxy, meanwhile, essentially has that as its club’s mission statement, whether the team is strong enough to actually contend for a title or not.

For this latest derby, the winner might come down to some combination of geography, payroll, or history. There are many layers to the LAFC vs LA Galaxy rivalry, and each side will bring something different to the table.

LAFC offers geography, but that only works when they win. Stressing that the Galaxy started in Pasadena before moving to Carson while LAFC plays and trains within the LA city limits. When playing at LAFC, there’s nothing but reminders from a fanbase that believes they’re the ones representing the city in both teams’ names. That’s good for banter, but losing in that situation only shifts the focus to their county rivals.

Then there’s payroll. At $27.3 million, the Galaxy has the league’s second-highest payroll according to the MLSPA’s salary release, only behind Toronto FC’s $32.2 million. The Galaxy also features two of the top five highest-paid players in Javier “Chicharito” Hernandez ($7.44 million) and Douglas Costa ($5.8 million).

Now, LAFC isn’t far down that list with the league’s sixth-highest payroll at $19 million. Curiously, the Galaxy and LAFC are the only two teams left out of the top 10 highest-payrolls in the league. LAFC actually has more players over the million-dollar mark in salary, with seven to the Galaxy’s five.

As for history, it’s worth asking just how far back is worth considering. The Galaxy’s history intertwines with the league’s own. The Galaxy did not win championships right away, but they’ve always been a heavyweight. The club has come through on that end, with five MLS Cups and a slew of big-name players on its all-time roster. However, from a player perspective, the only thing that connects this version of the Galaxy to its 2014 championship-winning side is the fifth star it got to place on its shield.

Instead, it’s the technical staff that provides the link to the dynasty eras. Technical director Jovan Kirovski (2011) and goalkeeping coach Kevin Hartman (2002 and ’05) won MLS Cups with the Galaxy as players and Kirovski added two more Cups as assistant coach (2011) and then technical director (2014). Coach Greg Vanney played in three finals for the club in 1996, ’99, and ’01 and assistant coach Dan Calichman was his teammate in the 1996 Galaxy squad.

LAFC has recent history on its side. They won the Supporters’ Shield despite losing its season finale, finishing on 67 points with a 21-9-4 record. In all of MLS, LAFC finished with the most wins (21), most home wins (13), second-most goals (66), and second-highest goal-differential at +28. The Galaxy and LAFC split their two regular-season outings, with each team beating the other at home. The tiebreaker, up to this point, was the US Open Cup match which the Galaxy won to eliminate LAFC from that tournament.

Still, when the teams line up against one another in what should be an electric atmosphere at Banc of California Stadium, only present-day will matter. The Galaxy will rely on its summer signings of Riqui Puig, Martin Caceres, and Gaston Brugman to carry the day while LAFC will look to Carlos Vela and its own recent additions of Gareth Bale and Denis Bouanga.

Whoever comes out ahead can rightfully boast it is the true champion of Los Angeles. At least until the clubs meet in the 2023 season opener at the Rose Bowl, when the debate will start all over once more.