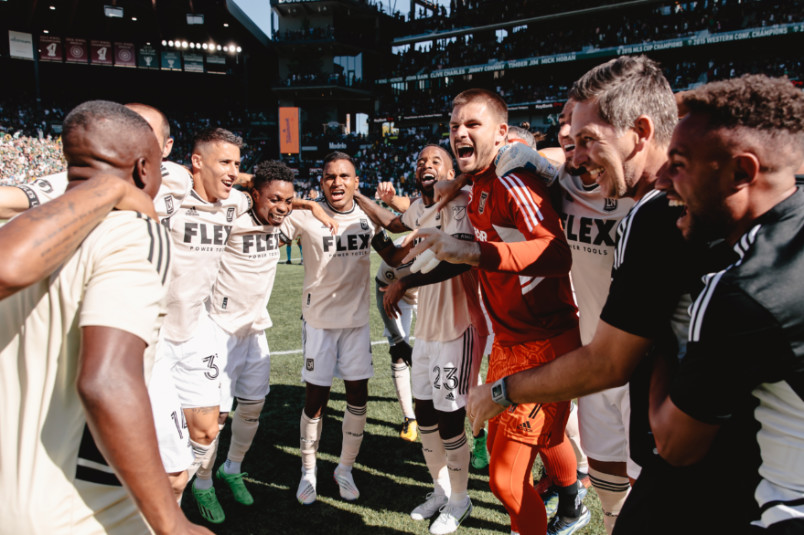 By Luis Bueno – RIVERSIDE, CA (Oct 5, 2022) US Soccer Players – It all comes down to this. The final weekend of the MLS season will determine playoff spots, sending teams to the postseason and crushing the hopes of others. A pair of Wednesday night matches will steal the spotlight from Sunday’s Decision Day slate, but there is plenty of positioning left to settle.

At the top, though, there is no movement. In fact, leaving the second spot blank and ranking the next-best team at number three would be more appropriate for the Supporters’ Shield-winning, MLS Cup favorite LAFC.

Winning the Supporters’ Shield was a great accomplishment, celebrated accordingly, but LAFC’s focus is on the grand prize. There is little debate that this is the team to beat, particularly with the Union’s latest result. The only thing now is to see if LAFC can avoid another letdown and reach MLS Cup this time.

Montreal’s meteoric rise continues, now two points back of Philadelphia heading into its final match. Philadelphia may have an easier time of it at home against Toronto, but Montreal has provided the pressure playing at Inter Miami.

The Union had such a strong regular season only to find trouble so close to the end. One point from two games and giving up four goals at Charlotte now has the Eastern Conference title in question. One more loss and the Union could go from Supporters’ Shield contenders to 2nd-place in the East. That’s not the best way to enter the postseason.

Dallas had been doing well managing its games down the stretch, but October started off poorly. They beat playoff contenders Minnesota and LAFC in September, but the club stumbled against the ousted Rapids. FC Dallas will finish 3rd, so it didn’t affect much, but the team has one more prep match before things get real.

The Red Bulls are hoping not to repeat its debacle against Columbus, leading 1-0 in the 89th minute only to lose 2-1. The Red Bulls could finish as low as 5th if results do not go their way.

Columbus played with a great deal of urgency against the Red Bulls, at least in the final few minutes. That saved their playoff hopes, with Wednesday’s game at Charlotte potentially setting them up to climb the table.

From year one to year two, Austin FC made great strides and became a strong contending club, but the team hasn’t quite stuck the finish. Since beating LAFC by 4-1 on August 26, Austin has lost two games by 3-0 and most recently fell 2-0 to Vancouver. They’re going to finish 2nd regardless but could use a result at home against Colorado.

A US Open Cup championship is already theirs, but a successful season always means reaching the MLS Cup playoffs. Orlando will be part of the scrap that four Eastern teams will partake in while fighting for the three remaining playoff spots. They have Inter Miami on the road on Wednesday and Columbus at home on Sunday, a tough but doable path to the playoffs.

In contrast to CF Montreal’s rise, the last couple of months haven’t been great for NYCFC. Two combined wins in August and September, adding another to start October when they beat Orlando City last Sunday. Perhaps NYCFC realizes that now is the time to step it up. They need a win at Atlanta to lock up 3rd-place, which could help avoid the Union until the conference final should both teams get that far.

Nashville SC might be the most underachieving good team in the league. They’ve got a playoff berth wrapped up, but the club hasn’t taken the next step in its development. Nashville has the pieces to be a team like Austin FC, but poor results, like the recent loss to Houston, have held it back. Their 6-5-6 home record ties with Houston for the fewest home wins in the West.

The Galaxy won’t be working through the scenarios en route to Decision Day this season, a change from this time last year. The club’s institutional memory focuses on lifting MLS Cups, and that’s always going to be the mentality for this team.

Portland’s inconsistencies have not gone in its favor at the very end of the season. A four-match winless skid led into a four-match winning streak, but since then, Portland has just one point from two games. Portland needs to get back to its winning ways to secure a playoff berth. This team is just talented enough for another postseason run, assuming they get the chance.

Real Salt Lake’s promising start to the season built on their shock playoff run in 2021. That eventually stalled, but they’re still in with a chance to make the playoffs starting Decision Day in 8th-place. Beating Portland at home means a playoff spot. It would also end a five-game winless streak.

At first glance, FC Cincinnati looks safe. The club sits in 5th-place in the East. However, the four clubs immediately beneath them in the table all play Wednesday, so that spot is tenuous at best. Still, FC Cincinnati needs just a win to lock up a playoff spot. Anyone associated with that club would have taken that 10 times out of 10 entering the season.

Vancouver was an afterthought for most of the season, but in recent matches have beaten the LA Galaxy, Seattle, and most recently Austin. Now it’s a trip to Minnesota in an attempt to extend its season.

If Inter Miami can hang onto the seventh spot and clinch a playoff berth, the club will have earned it. Inter Miami finishes against Orlando and Montreal and needs at least three points, likely four, to secure a postseason berth.

Minnesota nearly blew its playoff spot a year ago but hung on to get a draw in the season finale to reach the postseason. Despite fighting for a playoff spot, Minnesota is 0-5-1 in its last six matches and faces a tough home game against Vancouver.

It’s not much, but Sporting KC is playing well as the regular season comes to an end. They knocked Seattle out of playoff contention in week 33 and improved its record to 5-0-2 over the last seven matches. The club could finish with a respectable 43 points with a win at Dallas.

Charlotte enters the final week of the season with a little bit of life, but results need to go its way, and then some, in order to enter the final day with a chance. Still, the 4-0 drubbing of Philadelphia was a nice surprise for its supporters.

The party’s over for the Sounders. After starting September by beating Houston and Austin, one point from three games ended their chances. Last week’s 1-0 loss at Sporting Kansas City brought Seattle’s incredible playoff run to an end. They finish with a chance to move up from 11th to 9th needing a win against San Jose and other results.

New England might feel like it should be playing for something at the end of this season, but the Revs were mediocre at home and poor on the road, not a good combination. This year was as disappointing as last year was magical. It’s tough to believe how much can change for a club in a year.

Colorado did something that only two other teams in the West did this year, win double-digit home games. But instead of parlaying that success into another playoff berth, the Rapids enter the season’s final day already eliminated. The Rapids after all won just one road game and compiled a meager seven points from the road this year.

Houston played for pride down the stretch and it bore some results. They’ve gone 3-2-1 over its last six matches, not earth-shattering but certainly not bad. The best result over that run was a 2-1 win at Nashville in their road finale. Houston lost a conference-high 12 road games but somehow was able to defeat a playoff-bound Nashville team on its own field. That’s something for a team that can finish no higher than its current 13th-place, but could still be passed on Decision Day by the last-place Earthquakes.

Shea Salinas bid farewell to his home supporters after a long and distinguished career with San Jose. His 54th minute goal against Minnesota was a match winner and might have cost Minnesota a chance at the playoffs. September, though, was an otherwise forgettable month as the club lost 6-0 to Cincinnati and 3-2 to the hated Galaxy.

The Fire will play New England with both teams out of the playoffs but the final table not set. If Chicago needs a moral boost, passing New England in the standings on the final day could provide it. Maybe that’s the best close for yet another frustrating season that, at one point, offered much promise.

Josef Martinez won Goal of the Week for his amazing strike against New England in a 2-1 loss. Unfortunately, Atlanta’s mini-resurgence was too little, too late. Atlanta pieced together some wins in late August and September, but the club ultimately could not overcome its meager start.

The bottom fell out in September as Toronto FC lost all four of its matches and allowed 13 goals in the process. Not that the club had much of a chance to turn things around over the summer, but it did look like this team was different once new players arrived in July. Maybe a reminder of that changes the top of the Eastern Conference with Toronto hosting Philadelphia to close out its season.

United went winless in September, shut out in four of its last five matches through week 33 with two draws followed by three consecutive losses. Inter Miami needed a stoppage time winner in DC to close out the month, with United opening October with a 1-0 loss at Montreal last Saturday after giving up a first-half own-goal in a tight game. That should concern FC Cincinnati, playing at DC on Sunday.