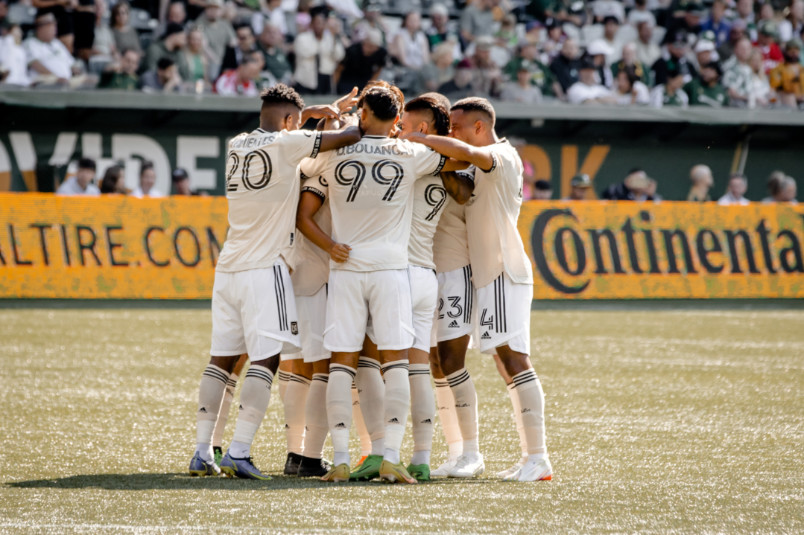 Week 33 of the 2022 MLS season began on Friday in Toronto, where Inter Miami won 1-0 on the road. Gonzalo Higuain scored in the 86th minute and Drake Callender kept the clean sheet with three saves.

“This group is an amazing group and now they’re beginning to believe what we’ve believed in them from day one and it’s great to see,” Inter coach Phil Neville said. “I think it helps when you’ve got a center forward that’s carrying the team towards the playoffs.”

Saturday’s schedule started with New England beating Atlanta 2-1 at Gillette Stadium. Giacomo Vrioni put the Revs up from the penalty spot in the 32nd with Josef Martinez equalizing in the 81st. Gustavo Bou scored for New England in the 85th minute.

“I think, for the first time in a long time, we played 90-plus minutes where we were really solid throughout,” New England coach Bruce Arena said. “Not that we were perfect by any means, but I think there was a consistent way of playing. There was good decision-making and some quality play. And we happened to play a team that plays soccer too, which is encouraging. We don’t see that (in) many games.”

Colorado shutout FC Dallas 1-0 at home on a 66th minute Diego Rubio goal. The Rapids played a man down from the 77th minute with a red card to Gustavo Vallecilla. Colorado goalkeeper William Yarbrough made two saves to keep the clean sheet.

Charlotte beat Philadelphia 4-0 at Bank of America Stadium. Daniel Rios scored in the 24th and 54th. The Union went a man down when Kai Wagner saw red in the 71st. Rios converted a 72nd minute penalty and finished off the scoring a minute into stoppage time. Charlotte goalkeeper Pablo Sisniega made one save to keep the clean sheet.

Columbus came back to beat the Red Bulls 2-1 at Lower.com Stadium. New York took the lead from a Frankie Amaya goal in the 53rd. The Crew’s Derrick Etienne equalized in the 89th and scored again three minutes into stoppage time.

Chicago beat FC Cincinnati 3-2 on the road, taking a 3-0 lead from Jhon Duran’s goal in the 56th, Brian Guitierrez scoring in the 59th, and Duran again in the 75th minute. Luciano Acosta pulled a goal back for Cincinnati in the 78th and Brandon Vazquez cut the lead to one in the 89th. Cincinnati’s Sergio Santos aw red five minutes into stoppage time.

“We have to go win a game,” Cincinnati coach Pat Noonan said. “I think we still have the understanding of the importance of where we’re at and teams still chasing us, which is good. But we let one get away tonight, and now, we have to go and win a game and not think about any other game other than our own.”

San Jose shutout Minnesota 2-0 at PayPal Park. Shea Salinas scored in the 52nd and Benjamin Kikanovic doubled the lead in the 71st minute.

Vancouver beat Austin 2-0 at BC Place. Ryan Gauld opened the scoring in the 7th minute and Lucas Cavallini doubled the lead in the 62nd. Whitecaps goalkeeper Thomas Hasal made five saves for the shutout.

The Galaxy drew 1-1 with Real Salt Lake at home to close out the Saturday schedule. Sergio Cordova put RSL up in the 25th with the Galaxy equalizing from a Douglas Costa penalty in the 68th minute.

“Obviously, I’m proud of these guys,” LA coach Greg Vanney said. “It’s been a couple years now that we’ve been battling together. Trying to put a group together. Fill in our holes. Grow in terms of our confidence. And just belief. Winning the games, or getting results in games that we need to, has been a big thing for us. We’ve had opportunities over the stretch to win games and take a big step forward, and sometimes we dropped those. But in this last little stretch of games, we’ve been winning when we need to win.”

Sunday’s schedule opened with NYCFC coming back to beat Orlando 2-1 at Red Bull Arena. Facundo Torres put Orlando up in the 47th. Alexander Callens equalized for NYCFC in the 66th and Talles Magno scored in the 81st minute.

Sporting Kansas City shutout Seattle 1-0 at home on a 41st minute William Agada goal. Sporting goalkeeper John Pulskamp made one save to keep the clean sheet.

Week 33 ended in Nashville with Houston winning 2-1 on the road. Sebastian Ferreira converted a 29th minute penalty and scored again in the 39th. Houston finished a man down with a red card to Teenage Hadebe four minutes into stoppage time. Walker Zimmerman converted the Nashville penalty two minutes later.