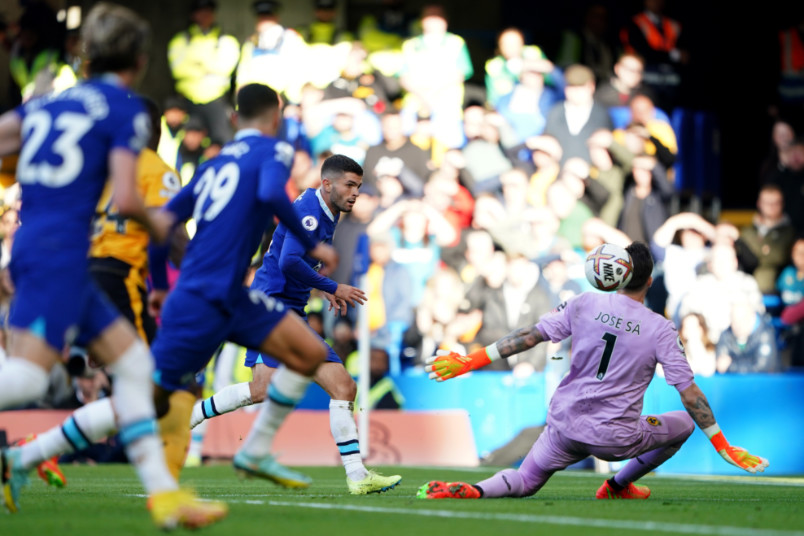 The roundup of USMNT players in Europe, Mexico, and Brazil starts in the Premier League with Christian Pulisic subbing out in the 72nd minute of Chelsea’s 3-0 home shutout of Wolverhampton. Kai Havetz put Chelsea up three minutes into first-half stoppage time with Pulisic doubling the lead in the 54th. Chelsea’s Armando Broja added a goal in the 90th minute.

“The role for Christian was a good one for him,” Chelsea manager Graham Potter told the club’s official site. “It was high wide left, he could attack the back line, and it was nice for him to score.”

Josh Sargent’s Norwich City lost 3-2 at home to Preston North End. Sargent put Norwich up in the 2nd with Preston’s Emil Riis Jakobsen scoring in the 25th and 51st minutes. Gabriel Sara equalized for Norwich in the 76th, but Preston’s Troy Parrott scored in the 80th minute. Ethan Horvath was in goal for Luton Town’s 0-0 draw at West Bromwich Albion in the Championship. Both teams finished with three shots on goal.

Lynden Gooch’s Sunderland lost 2-1 at Swansea City. Sunderland trailed 2-0 from goals in the 13th and a minute into first-half stoppage time. Jack Clarke scored for Sunderland in the 51st minute. Gooch saw yellow seven minutes into stoppage time. Duane Holmes subbed out in the 78th minute of Huddersfield Town’s 2-0 home win over Hull City. An own-goal put Huddersfield up in the 29th and Michal Helik scored in the 51st. Zack Steffen was in goal and Matthew Hoppe subbed on in the 75th minute for Middlesbrough’s 2-0 loss at Millwall to goals in the 5th and 49th minutes.

Moving to the Eredivisie, Ricardo Pepi’s Groningen lost 3-2 at home to RKC Waalwijk. Pepi converted a 14th minute penalty, with Groningen going a man down with a red card to Radinio Balker in the 36th. Waalwijk equalized from a 38th minute penalty and went ahead in the 61st. Pepi equalized for Groningen in the 76th, but Waalwijk scored again in the 80th minute.

In the Bundesliga, Timmy Chandler subbed on at halftime of Eintracht’s 3-0 loss at VfL Bochum. Eintracht fell behind in the 71st, giving up an 87th minute own goal, with Bochum scoring again a minute into stoppage time. Jordan Pefok subbed out in the 65th minute of Union Berlin’s 1-0 win at Stuttgart. Paul Jaeckel scored for Union Berlin in the 76th, playing a man up from the 82nd minute.

Joe Scally subbed out in the 83rd minute of Gladbach’s 5-2 home win over Cologne. Marvin Friedrich scored for Gladbach in the 27th with Cologne equalizing from the penalty spot in the 31st. Cologne saw red a minute into first-half stoppage time with Gladbach retaking the lead from a Ramy Bensebaini penalty a minute later. Lars Stindl scored for Gladbach the 47th and Bensebaini made it 4-1 in the 76th. Cologne pulled a goal back in the 83rd, but Marcus Thuram finished off the Gladbach scoring a minute into stoppage time.

Terrence Boyd subbed out in the 66th minute for Kaiserslautern in their 1-1 draw at Hamburg in the 2.Bundesliga. Down a goal from the 24th, Lex-Tyger Lobinger equalized for Kaiserslautern in the 82nd. George Bello subbed on at halftime of Arminia Bielefeld’s 2-1 home loss to Karlsruher. Trailing from the 43rd, Arminia’s Janni Luca Serra scored in the 52nd. Karlsruher scored again in the 54th minute.

Julian Green’s Furth drew 2-2 at Jahn Regensburg. Furth’s Damian Michalski scored in the 34th with Jahn Regensburg equalizing in the 42nd and going ahead in the 62nd. Simon Asta equalized for Furth in the 74th minute.

Cameron Carter-Vickers’s Celtic won 2-1 at St Johnstone in the Premiership. An own-goal put Celtic up in the 42nd with St Johnstone equalizing three minutes into stoppage time. Celtic’s Giorgos Giakoumakis scored in the fifth minute of stoppage time. Carter-Vickers saw yellow two minutes into stoppage time. Christian Ramirez subbed on in the 81st minute of Aberdeen’s 4-0 loss at Dundee United. Aberdeen fell behind in the 41st with Dundee United scoring in the 45th, converting a 73rd minute penalty, and Aberdeen giving up an own-goal in the 82nd.

Yunus Musah subbed on in the 62nd minute of Valencia’s 2-1 win at Osasuna in La Liga. Justin Kluivert scored for Valencia in the 28th and Mouctar Diakhaby doubled the lead in the 54th. Osasuna played a man down from the 69th the 69th with Valencia’s Diakhaby seeing red in the 90th. Osasuna saw red again six minutes into stoppage time. Musah saw yellow in the 73rd.

Erik Palmer-Brown subbed out in the 60th minute of Troyes’s 3-2 loss at Nice in Ligue 1. Troyes trailed 3-0 from goals in the 2nd, a 37th minute penalty, and the 50th. Xavier Chavalerin scored for Troyes in the 82nd and Abdu Conte pulled them within one in the 90th minute. Tim Weah subbed on in the 74th minute for Lille in their 1-0 home win over Lens. Jonathan David converted a 44th minute penalty.

Weston McKennie subbed on at halftime for Juventus in their 2-0 loss at AC Milan in Serie A. Milan’s Fikayo Tomori scored a minute into first-half stoppage time and Brahim Diaz doubled the lead in the 54th. Andrija Novakovich, Gianluca Busio, and Tanner Tessmann’s Venezia lost 2-1 at home to Bari in Serie B. Down a goal from the 46th, Venezia’s Pietro Ceccaroni equalized in the 70th. Bari converted a penalty in the 83rd. Novakovich subbed out in the 54th and Busio in the 74th. Tessmann subbed on in the 54th minute.

Sam Vines’s Royal Antwerp shutout STVV 2-0 at home in Belgium’s Pro League. Pieter Gerkens scored in the 8th with Antwerp playing a man up from the 39th. Antwerp doubled the lead from a Christopher Scott goal two minutes into stoppage time. Mark McKenzie’s KRC Genk won 2-1 at home over Kortrijk.. Paul Onuachu scored for Genk in the 37th with Kortrijk equalizing in the 58th. Onuachu converted a 79th penalty. Bryan Reynolds’s Westerlo won 2-0 at Club Brugge. Lyle Foster scored in the 53rd and 86th minutes.

Haji Wright subbed out in the 85th minute of Antalyaspor’s 1-1 home draw with Konyaspor in the Super Lig. Antalyaspor’s Fernando scored in the 51st with Konyaspor equalizing six minutes into stoppage time. Aron Johannsson’s Valur lost 2-1 at KR Reykjavik in the Urvalsdeild karla playoffs group stage. Johannsson scored in the 64th with KR Reykjavik scoring in the 69th and three minutes into stoppage time.

On Monday, Mix Diskerud subbed out in the 63rd minute of Omonia’s 1-0 loss at AEL in the Cypriot First Division. AEL scored in the 38th minute