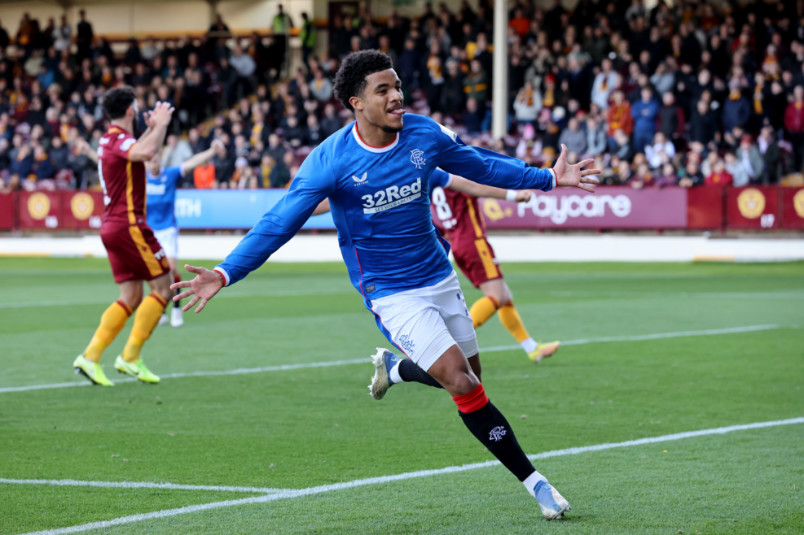 The roundup of USMNT players in Europe, Brazil, and Mexico starts in the Premiership with Malik Tillman’s Rangers winning 2-1 at Motherwell. Tillman put Rangers up in the 53rd and John Lundstram made it 2-0 in the 69th. Motherwell scored in the 77th minute.

“In the end it was a great run from Malik for the first goal and we had a set piece goal as well,” Rangers manager Giovanni van Bronckhorst said. “It was a great run (from Tillman), he had to get past a lot of players. You could see the powerful runs that he has and today he did that really well, which opened up the game for us and opened up the spaces.”

“I’m super pleased,” Celtic manager Ange Postecoglou said. “We’ve spoken about the fact that even though we haven’t had the results in the Champions League, we still feel that our football’s been good, so it’s just been a matter of staying focused on the way we wanted to play.”

In the Bundesliga, Jordan Pefok subbed out in the 67th minute of Union Berlin’s 2-0 home win over Borussia Dortmund. Gio Reyna subbed on in the 82nd minute for Dortmund. Union Berlin’s Janik Haberer scored in the 8th and 21st minutes with Pefok assisting on the second goal. Joe Scally’s Gladbach drew 2-2 at Wolfsburg. Marcus Thuram put Gladbach up in the 13th with Wolfsburg equalizing in the 13th. Gladbach’s Thurham returned the lead in the 47th with Wolfsburg leveling the score in the 69th minute.

“All things considered, I think it was the right result,” Gladbach player Julian Weigl said. “Even if we did lead twice and as a result can’t be completely satisfied with the draw. It wasn’t our best game in general. It was a tough away game against a strong opponent. All in all, we can live with taking a point.”

Julian Green’s Furth drew 2-2 at home with Hansa Rostock in the 2.Bundesliga. Furth’s Branimir Hrgota scored in the 20th with Hansa equalizing in the 57th. Ragnar Ache scored for furth in the 60th with Hansa going a man down in the 62nd. Hansa equalized from a penalty three minutes into stoppage time. George Bello’s Arminia Bielefeld lost 2-0 at Hannover 96 to goals in the 4th and 86th minutes. Terrence Boyd’s Kaiserslautern lost 3-0 at home to Jahn Regensburg to goals in the 8th, 57th, and 85th minutes.

Moving to the Premier League, Tyler Adams and Brenden Aaronson’s Leeds United lost 1-0 at home to Arsenal to a 35th minute goal. Tim Ream and Antonee Robinson’s Fulham drew 2-2 at home with Bournemouth. down a goal from the 2nd minute, Issa Diop equalized for Fulham in the 22nd. Bournemouth went ahead in the 29th with Aleksandar Mitrovic equalizing from a 52nd minute penalty. Ream saw yellow in the 54th minute.

Josh Sargent’s Norwich City lost 2-1 at Watford. Trailing 2-0 from goals in the 18th and 31st, Sargent scored for Norwich in the 45th. Lynden Gooch subbed out at halftime of Sunderland’s 2-1 home win over Wigan Athletic. Falling behind in the 44th, Elliot Embleton equalized for Sunderland in the 54th and Dennis Cirkin scored their winner in the 72nd minute.

Duane Holmes subbed out in the 67th minute of Huddersfield Town’s 2-1 loss at Rotherham United. Down a goal from the 25th, Danny Ward equalized for Huddersfield in the 29th. Rotherham scored again in the 61st minute. Holmes saw yellow in the 60th. Ethan Horvath was in goal for Luton Town’s 3-1 home win over QPR. Elijah Adebayo opened the scoring for Luton in the 18th with an own-goal doubling the lead in the 77th. Luton gave up an own-goal a minute into stoppage time, but Luke Freeman scored their third a minute later.

Zack Steffen’s Middlesbrough lost 2-1 at home to Blackburn. An own-goal put Blackburn up in the 4th, doubling their lead in the 17th. Boro’s Duncan Watmore scored a minute into stoppage time.

Yunus Musah subbed out in the 74th minute of Valencia’s 2-2 home draw with Elche in La Liga. Elche went ahead from the penalty spot in the 29th with Valencia’s Edinson Cavani equalizing from a penalty in the 41st and scoring again seven minutes into first-half stoppage time. Elche equalized in the 65th. Musah saw yellow in the 73rd minute.

Tim Weah subbed on in the 65th minute for Lille’s 3-0 win at Strasbourg in Ligue 1. Jonathan David put Lille up from the penalty spot in the 41st with Weah assisting on David’s second goal in the 76th. Weah also assisted on Remy Cabella’s goal in the 80th minute. Erik Palmer-Brown subbed out at halftime for Troyes in their 1-1 home draw with Ajaccio. Jackson Porozo scored for Troyes in the 76th with Ajaccio equalizing in the 88th.

Weston McKennie’s Juventus won 1-0 at Torino in Serie A. Dusan Vlahovic scored in the 74th minute. Gianluca Busio subbed out in the 66th and Andrija Novakovich subbed on in the 66th for Venezia’s 3-1 home loss to Frosinone in Serie B. Denis Cheryshev scored for Venezia in the 42nd with Frosinone equalizing in the 70th. Venezia went a man down in the 76th when Pietro Ceccaroni saw red and Frosinone added goals in the 85th and four minutes into stoppage time.

Cole Bassett subbed on in the 88th minute of Fortuna Sittard’s 0-0 home draw with Waalwijk in the Eredivisie. Richy Ledezma subbed on in the 62nd minute of PSV’s 6-1 home win over Utrecht. PSV’s Xavi Simons scored in the 8th with Utrecht equalizing in the 24th. Guus Til added goals for PSV in the 33rd and 38th minutes with Simons scoring again in the 60th. Anwar El Ghazi finished off the PSV scoring in the 86th and 89th minutes. Ricardo Pepi’s Groningen lost 3-0 at Twente to goals in the 48th, 55th, and 84th minutes.

Mark McKenzie’s KRC Genk won 1-0 at Oud-Heverlee Leuven in the Belgian Pro League. Paul Onuachu scored in the 16th with Genk’s Angelo Preciado seeing red in the 43rd minute. Bryan Reynolds’s Westerlo drew 2-2 at home with RFC Seraing. After falling behind in the 12th, an own-goal leveled the score for Westerlo in the 28th. Nene Dorgeles put Westerlo up in the 33rd and Seraing equalized in the 48th minute. Sam Vines subbed out in the 17th minute of Royal Antwerp’s 3-0 loss at Standard to goals in the 2nd, 4th, and 9th minutes.

Joe Corona subbed out in the 63rd minute of GIF Sundsvall’s 4-1 loss at Hacken in the Allsvenskan. Down a goal from the 39th, Sundsvall’s Pontus Engblom equalized a minute into first-half stoppage time. Hacken responded with goals in the 54th and 65th, making it 4-1 from a 68th minute own-goal. Sundsvall’s Alexander Blomqvist saw red a minute into stoppage time. Joe Gyau’s Degerfors drew 1-1 at Elfsborg, taking the lead from a 58th minute Diego Camps goal. Elfsborg equalized in the 83rd.

John Brooks’s Benfica drew 1-1 at Caldas, advancing 5-3 on penalties in the Taca de Portugal. Peter Musa scored for Benfica in the 53rd and Caldas equalized in the 74th. Ulysses Llanez subbed out in the 65th minute of St Polten’s 0-0 home draw with GAK 1902 in the Austrian second division. Kenny Saief’s Neftchi won 2-0 at Kapaz in the Azerbaijan Premier League. Emin Mahmudov scored in the 17th and Saief doubled the lead in the 82nd. Saief saw yellow in the 62nd minute. Caleb Stanko subbed out in the 57th minute for Asteras Tripolis in their 0-0 home draw with Panetolikos in the Greek Super League.

Haji Wright’s Antalyaspor lost 3-2 at Alanyaspor in the Super Lig. Down 2-0 from goals in the 44th and 51st minutes, Wright scored in the 57th. With Alanyaspor up 3-1 from a goal in the 70th, Wright scored again in the 87th minute. Aron Johansson’s Valur shutout Stjarnan 3-0 at home in the Urvalsdeild karla playoffs. Johannsson opened the scoring in the 19th with Birkir Mar Saevarsson doubling the lead in the 50th. Sigurdur Egill Larusson finished off the Valur goals in the 61st minute.

Johnny Cardoso subbed out in the 65th minute of Internacional’s 1-0 win at Botafogo in Brazil’s Serie A. Braiain Romero scored International’s goal in the 67th minute.