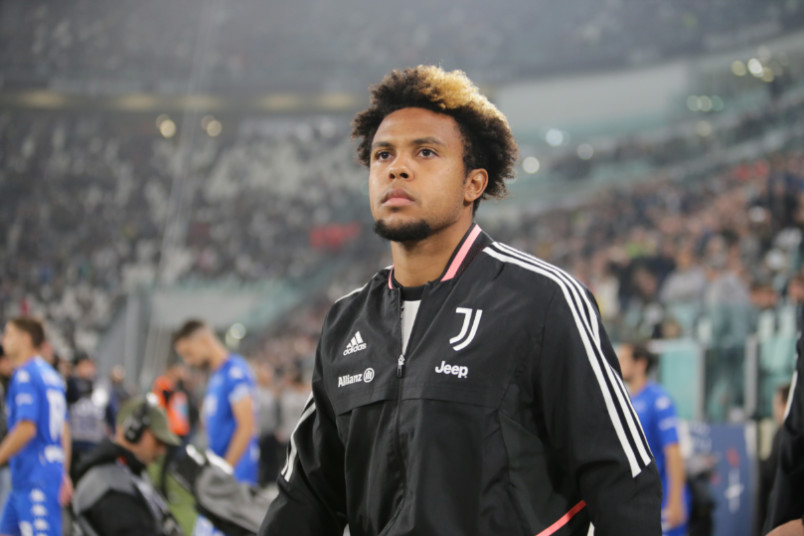 The roundup of the USMNT players in Europe and Brazil starts in Serie A, where Weston McKennie subbed out in the 66th minute of Juventus’s 4-0 home win over Empoli on Friday. Moise Kean put Juventus up in the 8th with McKennie doubling the lead in the 55th and Adrien Rabiot adding goals in the 82nd and four minutes into stoppage time. Juventus is in 8th-place with 19 points from 11 games.

“Tonight we put in a good display and we never once dropped our momentum, however, when you’re in trouble, the psychological aspect makes the difference,” Juventus coach Massimiliano Allegri said “Tonight, we gave a good account of ourselves and it was important to win since we are behind in the championship and we hadn’t won two wins in a row for a while and we have to chase as we’ve lost points.”

Sergino Dest subbed out at halftime of AC Milan’s 4-1 home win over Monza. Brahim Diaz put Milan up 2-0 with goals in the 16th and 41st with Divock Origi making it 3-0 in the 65th. Monza scored in the 70th, but Rafael Leao finished off the Milan goals in the 84th minute. Gianluca Busio subbed out in the 68th for Tanner Tessman and Andrija Novakovich subbed in in the 68th for Venezia’s 1-1 draw at Brescia in Serie B. Down a goal from the 31st, Venezia’s Domen Crnigoj equalized in the 87th.

In the Bundesliga, Gio Reyna subbed out in the 66th minute of Borussia Dortmund’s 5-0 home win over VfB Stuttgart. Jude Bellingham scored in the 2nd with Niklas Sule doubling the lead in the 13th. Reyna scored in the 44th with Bellingham making it 4-0 in the 53rd and Youssoufa Moukoko finished off the Dortmund goals in the 72nd.

Joe Scally subbed out in stoppage time for Gladbach in their 3-1 home loss to Eintracht. Eintracht’s Jesper Lindstrom scored in the 6th with Eric Ebimbe doubling the lead in the 29th. Lindstrom scored again the 45th. Gladbach’s Marcus Thuram pulled a goal back in the 72nd minute.

Julian Green subbed out at halftime of Furth’s 3-1 loss at Heidenheim. Trailing from goals in the 9th, 33rd, minutes, Furth’s Branimir Hrgota scored in the 52nd. Heidenheim converted a penalty in the 56th.

Antonee Robinson and Tim Ream’s Fulham won 3-2 at Brenden Aaronsons Leeds United. Leeds went up from a 20th minute Rodrigo Moreno goal. Aleksandar Mitrovic equalized for Fulham in the 26th, going ahead from goals from Bobby Reid in the 74th and William in the 84th. Crysencio Summerville scored for Leeds a minute into stoppage time. Robinson saw yellow in the 62nd.

Christian Pulisic subbed on in the 74th minute in Chelsea’s 1-1 home draw with Manchester United in the Premier League. A Jorginho penalty put Chelsea up in the 87th with Manchester United equalizing four minutes into stoppage time. A league down, Zack Steffen’s Middlesbrough drew 0-0 with Duane Holmes’s Huddersfield Town. Holmes subbed out in the 86th minute.

Cameron Carter-Vickers’s Celtic won 4-3 at Hearts in the Premiership. James Forrest put Celtic up in the 14th, but Hearts responded with a 47th minute equalizer and a first-half stoppage time penalty. Giorgos Giakoumakis equalized for Celtic in the 55th and Daizen Maeda scored in the 59th. Hearts equalized from the penalty spot in the 65th, but Greg Taylor scored for Celtic in the 76th minute.

Malik Tillman started and James Sands subbed out at halftime of Rangers’ 1-1 home draw with Livingston. Falling behind in the 4th minute and playing a man up from the 78th, Rangers’ John Lundstram scored a minute into stoppage time. Tillman saw yellow in the 44th and Sands in the 75th.

Yunus Musah’s Valencia lost 2-1 at home to Mallorca in La Liga. Edinson Cavani converted a Valencia penalty in the 52nd with Mallorca equalizing from the penalty spot in the 66th and going ahead in the 83rd. Musah saw yellow in the 70th minute.

Mark McKenzie’s KRC Genk won 3-1 at Sam Vines’s Royal Antwerp in the Belgian Pro League. Bryan Heynen scored for Genk in the 13th with Paul Onuachu doubling the lead in the 33rd. Antwerp’s Vincent Jannsen scored in the 42nd, but Onuachu added a Genk goal in the 77th. Bryan Reynolds’s Westerlo won 2- at Kortrijk. Playing a man up from the 26th, Westerlo’s Nicolas Madsen scored in the 48th and Nene Dorgeles made it 2-0 in the 83rd. Reynolds saw yellow in the 30th minute.

Romain Gall subbed on in the 86th minute of Malmo’s 2-1 loss at Hacken in the Allsvenskan. Trailing from goals in the 1st and 73rd and up a man from the 49th, Malmo’s Felx Beijmo scored in the 85th minute. Joe Gyau’s Degerfors won 2-1 at Helsingborg. Gustaf Lagerbielke put Degerfors up in the 4th and Helsingborg equalized in the 54th. Degerfors’ Nokila Durdic scored four minutes into stoppage time. Gyau saw yellow in the 76th minute.

Ulysses Llanez subbed on in the 60th minute for St Polten in their 1-0 win at Horn in the Erste Liga. Llanez scored three minutes into stoppage time. Kenny Saief’s Neftchi lost 3-2 at home to Sabah in the Azerbaijan Premier League. Trailing 3-0 from goals in the 37th, first-half stoppage time, and the 52nd, Omar Buludov scored for Neftchi in the 71st. Neftchi’s Ismayil Zulfugarli saw red in the 75th and Emin Mahmudov converted a penalty in the 83rd. Saief saw yellow in the 84th minute.

Aron Johannsson’s Valur lost 5-2 at home to Breidablik in the Urvalsdeild karla. Down a goal from the 24th, Valur’s Patrick Pedersen equalized in the 30th and Sigurdur Larusson scored a minute into first-half stoppage time. Breidablik equalized from a 45th minute penalty, making it 3-2 in the 55th. Valur went a man down with a red card to Sevastian Hedlund in the 62nd with Breidablik adding goals in the 86th and 88th minutes. Johannsson saw yellow in the 56th minute.

Johnny Cardoso subbed out in the 77th minute of Internacional’s 1-1 draw at Cortiba in Brazil’s Serie A. Down a goal from the 24th, Internacional’s Vitao equalized in the 60th minute.