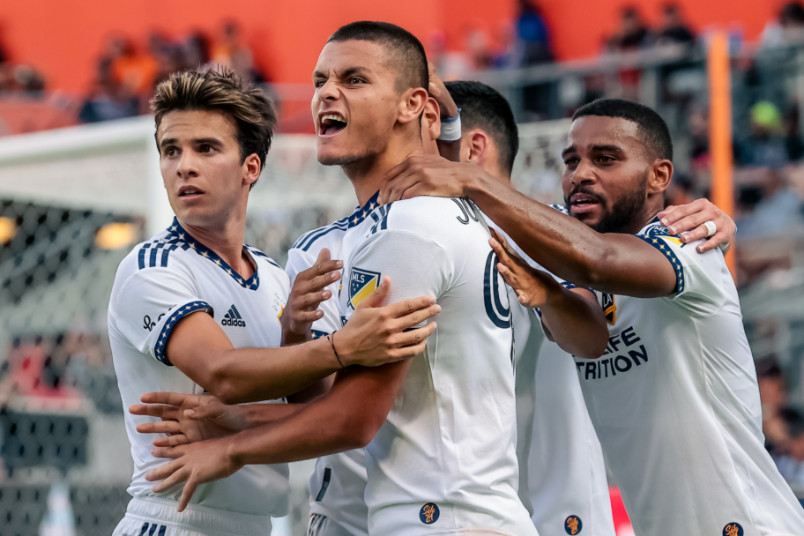 By Luis Bueno – RIVERSIDE, CA (Oct 12, 2022) US Soccer Players – It used to be that the LA Galaxy hosting in the playoffs was commonplace. It was not an unusual occurrence nor something to necessarily celebrate.

Of course, in the league’s early days and as it progressed into its second decade, playoff formats changed. At various times, any team making the playoffs got a home game. Back then, the Galaxy’s place in the final regular-season standings usually ensured that it would host the decisive series match. The club’s winning ways usually saw it through to the playoff’s latter stages.

The Galaxy is trying to revive the past while looking to the future. The club will once again host a playoff match. They’ll attempt to use that as a springboard back to MLS Cup, where LA feels it belongs each and every season.

However, the Galaxy’s road, not just back to MLS Cup but back to being the league’s top club year in and year out, is not a direct route as the playoff bracket makes it look. Three wins in October are certainly possible, but every team in the field is looking at similar scenarios and thinking there’s a way forward. LA is back in the playoffs and is indeed hosting on Saturday against Nashville SC. The similarities between this year’s team and the championship-winning, league-dominating ones end there.

The last time the Galaxy won a home playoff match was on October 30, 2016. On that day, Giovani Dos Santos scored the only goal off an assist from Jelle Van Damme to propel the Galaxy to a 1-0 win over Colorado. Other notable players in uniform that day were Landon Donovan, Robbie Keane, and Steven Gerrard. Since MLS still played series not so long ago, one week later, the Galaxy bowed out of the playoffs with a loss at the Rapids on penalties.

From 2017 through 2021, the Galaxy made the playoffs just once. The Galaxy won at Minnesota and then fell at LAFC. Those two playoff games are the only thing the Galaxy has to show for five seasons of work.

This version of the Galaxy has players who are on their third year with the team who will play their first playoff game as a member of the Galaxy. Javier “Chicharito” Hernandez, Jonathan Bond, and Nick DePuy have yet to play in an MLS playoff match. Teammates like Marky Delgado and Sacha Kljestan have competed in the MLS Cup playoffs but not as members of the Galaxy.

In fact, there are few active players who can say that they have played in a playoff match with the Galaxy. There is only one person who suited up in the club’s brief 2019 playoff run that is still with the club – Julian Araujo, who didn’t play in either of the two matches.

There is no continuity with this club as there has been a revolving door of players and coaches since 2017. Continuity was a hallmark throughout the Galaxy’s glory days. There was a connection from the club’s early days to the 2005 team as players like Cobi Jones and Kevin Hartman were around for both. Donovan took the mantle from 2005 and was a key part of the team’s title-winning sides in 2011, 2012, and 2014. Bruce Arena was the coach and GM for the last three cup winners. His presence along with key players like Donovan, Keane, and Omar Gonzalez were key parts of the Galaxy’s championship rosters.

Because of the club’s continuity, the Galaxy knew how to grind out playoff games. More than that, the Galaxy knew what to do to overcome tough playoff matches. The Galaxy reached MLS Cup 2009 in a bit of a surprise run, but lost on penalties to Real Salt Lake. In 2010 the Galaxy came in as heavy favorites to get back to the Cup but lost to FC Dallas in the Western Conference final. Those losses though hardened the Galaxy, and the club won consecutive championships. Another playoff setback came in 2013, but the Galaxy overcame that one and won again in 2014.

This year’s team doesn’t have those playoff battles to rely on for confidence and no playoff setbacks that light the players’ fire when everything is on the line once more. That lack of continuity is not necessarily a harbinger of tough times to come.

LA’s path to MLS Cup 2022 begins at Dignity Health Sports Park against Nashville. Getting it to Banc of California Stadium is a step for a team that has to circumvent its recent history to get that far. But, if they do, that same recent history suggests LAFC will have something to worry about.