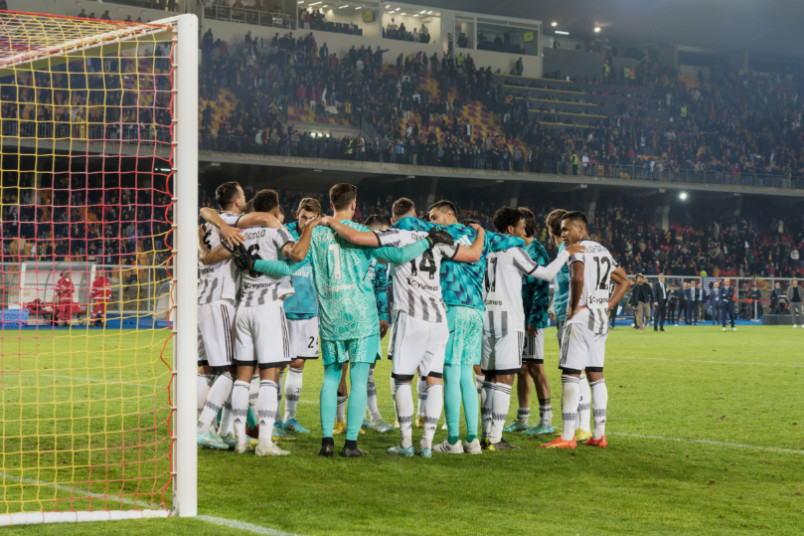 The roundup of USMNT players in Europe starts in Serie A with Weston McKennie subbing out at halftime of Juventus’s 1-0 win at Lecce. Nicolo Fagiolo scored for Juve in the 73rd minute. Sergino Dest subbed on at halftime of AC Milan’s 2-1 loss at Torino. Trailing 2-0 from goals in the 35th and 37th, Junior Messias scored for Milan in the 67th minute. Tanner Tessmann and Andrija Novakovich subbed out in the 59th for Venezia in their 2-0 home loss to Ascoli in Serie B. Ascoli scored in the 67th, going a man up in the 80th minute from a Jesse Johnson red card, and scoring again in the 86th minute.

A league down, George Bello subbed on in the 80th minute of Arminia Bielefeld’s 1-0 loss at Furth. Armindo Sieb scored in the 30th minute. Terrence Boyd subbed out in the 74th minute of Kaiserslautern’s 0-0 home draw with Nurnberg.

Brenden Aaronson and Tyler Adams’s Leeds United won 2-1 at Liverpool in the Premier League. Rodrigo Moreno scored for Leeds in the 4th with Liverpool equalizing in the 14th. Leeds’s Crysencio Summerville scored in the 89th minute. Christian Pulisic subbed out in the 79th minute of Chelsea’s 4-1 loss at Brighton. Falling behind to a 5th minute goals and own-goals in the 14th and 42nd minutes, Chelsea’s Kai Havertz scored in the 48th. Brighton added a fourth goal two minutes into stoppage time. Tim Ream and Antonee Robinson’s Fulham drew 0-0 at home with Everton.

Duane Holmes subbed on in the 31st minute for Huddersfield Town in their 1-0 home win over Millwall. Yuta Nakayama scored in the 9th minute. Ethan Horvath’s Luton Town drew 1-1 at home with Sunderland, taking the lead from a Carlton Morris goal two minutes into stoppage time. Sunderland’s Elliot Embleton equalized in the 78th minute. Zack Steffen’s Middlesbrough lost 2-1 at Preston North End. Chuba Akpm put Boro up in the 7th. Preston’s Emil Jakobsen equalized in the 35th with Jordan Storey scoring a minute into stoppage time.

James Sands and Malik Tillman’s Rangers won 4-1 at home over Christian Ramirez’s Aberdeen. Ramirez subbed on in the 77th minute. Aberdeen took the lead from a 21st minute goal from Connor Barron. Rangers’ Antonio Cook equalized in the 27th and John Lundstrom scored three minutes into stoppage time. James Tavernier (51st) and Alfredo Morales (85th) added goals. Cameron Carter-Vickers’s Celtic won 3-0 at Livingston. Kyogo Furuhashi opened the scoring in the 9th, Greg Taylor doubled the lead in the 53rd, and Jota finished off the goals in the 87th minute. Carter-Vickers saw yellow in the 27th minute.

Erik Palmer-Brown’s Troyes lost 4-3 at PSG in Ligue 1. Mama Balde put Troyes up in the 3rd minute. PSG equalized in the 24th with Balde scoring again for Troyes in the 52nd. PSG equalized in the 55th, scoring in the 62nd and added a 77th minute penalty. Troyes’s Ante Palaversa scored in the 88th minute. Tim Weah subbed out in the 70th minute of Lille’s 1-0 loss at Lyon to a 74th minute goal.

Cole Bassett subbed on in the 89th minute of Fortuna Sittard’s 3-1 loss at Sparta Rotterdam in the Eredivisie. Fortuna’s Tijjani Noslin scored in the 19th with Sparta equalizing in the 26th, converting a 54th minute penalty, and scoring again in the 83rd. Richy Ledezma subbed on in the 83rd minute of PSV’s 3-1 home win over NEC. Anwar El Ghazi scored in the 18th, Luuk de Jong converted a 50th minute penalty, and Noni Madueke finished off the goals in the 84th. Ricardo Pepi’s Groningen drew 0-0 at FC Emmen.

Mark McKenzie’s KRC Genk won 3-1 at home over Mechelen in the Belgian Pro League. Daniel Munoz put Genk up in the 9th with Mechelen equalizing in the 15th. Gerardo Arteaga put Genk up in the 57th with Bilal El Khannous seeing red in the 64th. Joseph Paintsil finished off the Genk scoring a minute into stoppage time. Bryan Reynolds’s Westerlo lost 3-2 at home to STVV. Down 2-0 from a 24th minute goal and a stoppage time penalty, Maxim De Cuyper pulled a goal back in the 54th and equalized from the penalty spot in the 83rd. STVV scored again in the 83rd. Sam Vines’s Royal Antwerp lost 1-0 at Charleroi to a 35th minute goal.

Joe Corona subbed out in the 79th minute of GIF Sundsvall’s 3-2 home loss to Sirius in the Allsvenskan. Pontus Engblom put GIF Sundsvall up in the 9th with Sirius scoring in the 22nd and 61st minutes. Erik Andersson equalized for GIF Sundsvall in the 62nd with Sirius scoring three minutes into stoppage time. Corona saw yellow in the 64th. Romain Gall’s Malmo won 5-2 at Varbergs BoIS. Ola Toivonen put Malmo up in the 44th, doubling the lead in the 52nd. Varbergs BoIS pulled a goal back in the 54th with Toivonen scoring again for Malmo in the 55th. Varbergs BoIS scored again in the 73rd. Malmo’s Soren Rieks scored in the 64th and Mohamed Turay finished off the goals in the 88th minute. Gall saw yellow in the 77th minute.

Reggie Cannon’s Boavista drew 2-2 at home with Vizela in the Primeira Liga. Masaki Watai scored for Boavista in the 4th with Vizela equalizing in the 9th and going ahead in the 28th. Boavista equalized from a Yusupha Njie penalty in the 79th. Boavista went a man up in the 83rd. Cannon saw yellow in the 78th minute. Ulysses Llanez subbed on at halftime for St Polten in their 5-0 home win over Austria Vienna II in the Erste Liga. St Polten’s Luis Hartwig scored in the 8th, 18th, and 25th minutes with Jaden Montnor making it 4-0 in the 29th. Llanez finished off the scoring in the 52nd minute.

Kenny Saief’s Neftchi won 3-0 at Zira in the Azerbaijan Premier League. Egor Bogomolskiy scored in the 6th, Godsway Donyoh doubled the lead in the 75th, and Emin Mahmudov scored in the 83rd minute.