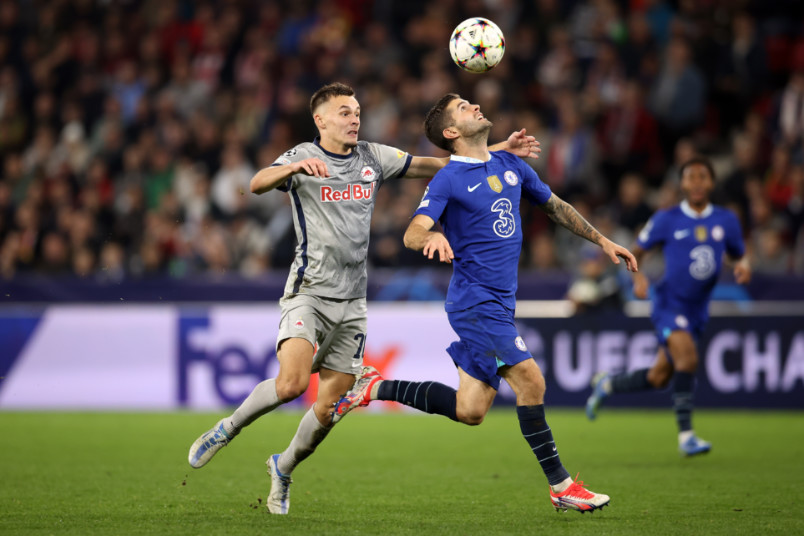 Wednesday’s soccer news starts in the Champions League with Christian Pulisic’s Chelsea beating Red Bull Salzburg 2-1 in group E. Mateo Kovacic scored for Chelsea in the 23rd with Salzburg equalizing in the 48th. Chelsea’s Kai Havetz put Chelsea up for good in the 64th minute.

“We got Raheem (Sterling) and Christian into some good areas and the fact they had to defend quite wide allowed Conor (Gallagher) and Kai (Havertz) to get in,” Chelsea manager Graham Potter said. “We should have got more goals in the first-half. How Red Bull defend means they often give you the opposite space, so if you can get the ball to someone who is good one v one you have an advantage. Also, it makes them stretch across the pitch and opens up some gaps in their line which is very organised. It worked quite well.”

Also in group E, Sergino Dest wasn’t in the squad for AC Milan’s 4-0 win at Dinamo Zagreb. Matteo Gabbia put Milan up in the 39th with Rafael Leao doubling the lead in the 49th and Olivier Giroud converting a 59th minute penalty. An own-goal finished off the scoring in the 69th minute.

Weston McKennie’s Juventus lost 4-3 at Benfica in group H. John Brooks was on the bench for Benfica. Antonio Silva put Benfica up in the 17th with Juventus’s Moise Kean equalizing in the 21st. Joao Mario converted a 28th minute Benfica penalty with Rafa making it 4-1 with goals in the 35th and 50th. Juve’s Arkadiusz Milik scored in the 77th and McKennie pulled them within a goal in the 79th.

“At the beginning Benfica played very fast football, then in the second-half we went out and showed what we were capable of, but by then we were already down in the match,” Juventus coach Massimiliano Allegri said. “Now, we have to get over the elimination which hurts, and then think about the championship and then next Wednesday we have to ensure qualification to the Europa League.”

“We produced a very decent performance in the three previous games against Manchester City but didn’t defend cleanly and clearly until the end,” Borussia Dortmund Edin Terzic said. “We managed that well today. The key was that we gave away few goal scoring chances. The penalty situation was the only time that we didn’t manage to keep them away from our goal. But then Greg was on hand and kept us in the game. It was a very coherent and good team performance.”

Cameron Carter-Vickers’s Celtic drew 1-1 at home with Shakhtar Donetsk in group F with Georgios Giakoumakis putting Celtic up in the 34th. Shakhtar Donetsk equalized in the 58th minute. Celtic can’t finish any higher than 4th in the group.

“At this level you have to earn everything you get and that’s part of the process,” Celtic manager Ange Postecoglou said. “You know that it requires massive effort every time, and that’s why victories at this level are not easy to come by, and for us as a football club, that’s what we aspire to be. We want to be a Champions League football club that is there every year and is making an impact, and that’s our task now.”

Moving to the Championship, Josh Sargent’s Norwich City lost 1-0 at Burnley to an 82nd minute penalty.

“We’re really disappointed to lose the game,” Norwich City coach Dean Smith said. “We had to show a different side of our game today, because we got out-footballed in the first 30 minutes. They passed and moved really well, and we aided it. When we won it, we gave the ball back. That was disappointing. We had to sort our pressing shape out, because they were playing through us a little bit too much. We flattened off in midfield, and decided to let their center-halves have it. We took a few punches in the first-half.”

Europa League on TUDN: PSV vs Arsenal at 12:45pm. UniMas has Manchester United vs Sheriff at 3pm. Liga MX on Univision: Toluca vs Pachuca at 9pm ET.