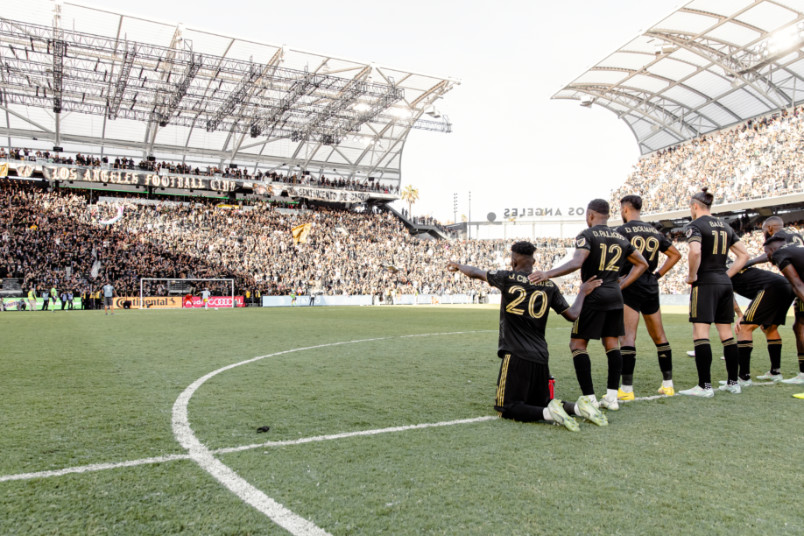 Monday’s soccer news starts with LAFC’s MLS Cup win, beating Philadelphia 3-0 on penalties after drawing 3-3 at Banc of California Stadium. Kellyn Acosta put LAFC up in the 28th with the Union’s Daniel Gazdag equalizing in the 59th. LAFC retook the lead from a Jesus Murillo goal in the 83rd with Jack Elliott equalizing for Philadelphia in the 85th. With the game in the second-half of extra time, LAFC goalkeeper Maxime Crepeau saw red in the 116th minute and John McCarthy subbed on in goal. Elliott scored again four minutes into stoppage time and LAFC’s Gareth Bale equalized eight minutes into stoppage time. After both teams failed to convert in the first round of penalties, LAFC went three-for-three with McCarthy saving two penalties and winning MLS Cup MVP.

“The game had a little bit of everything, for sure,” Acosta said. “Goals galore, going up a goal, going down a goal, scoring in the last minutes of the game, PKs. Yeah… it was a roller-coaster, it was craziness.”

Moving to England and this week’s League Cup third round games with 32 teams left in the tournament. Matt Turner’s Arsenal hosts Brighton on Wednesday with Turner on the bench for Arsenal’s 1-0 Premier League win at Chelsea. Arsenal joins the competition in this round along with the other teams involved in Europe. That includes Christian Pulisic’s Chelsea, at Manchester City. Chris Richards’s Crystal Palace is at Newcastle, advancing after beating Oxford United 2-0 on August 23. For the teams that advance, the round of 16 games are on the schedule starting on December 19.

In the Europa League knockout round playoffs, Weston McKennie’s Juventus plays Nantes, Jordan Pefok’s Union Berlin drew Ajax, and Richy Ledezma’s PSV starts at Sevilla with all games on February 16 and 23. Turner’s Arsenal is already in the round of 16, set for March 9 and 16.

La Liga on ESPN Deportes: Elche vs Girona at 1pm and Osasuna vs Barcelona at 3:30pm. Bundesliga on ESPN2: Bayern Munich vs Werder Bremen at 2:30pm ET.