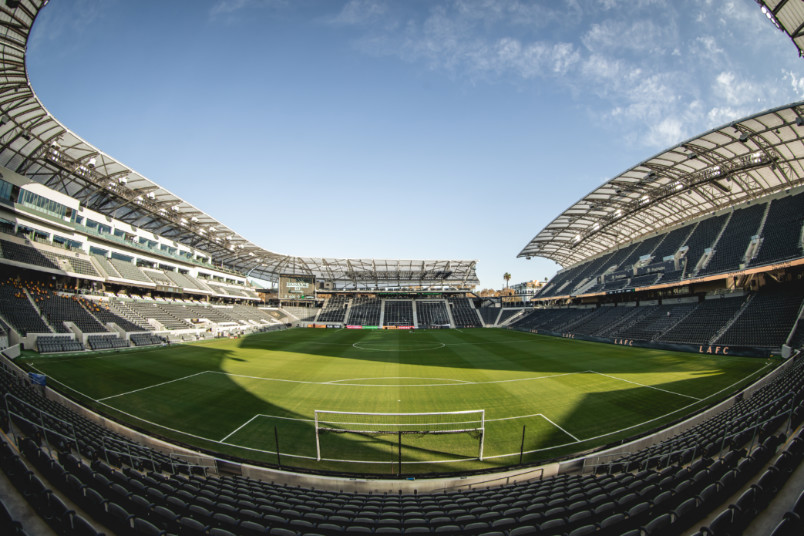 By Luis Bueno – RIVERSIDE, CA (Nov 2, 2022) US Soccer Players – And then there were two. LAFC and Philadelphia will meet on Saturday at Banc of California Stadium in the 2022 MLS Cup. There is finally justice as the two best teams during the regular season will decide the league title in a one-off contest. If the result follows these rankings, the hosts will hoist the trophy before its boisterous crowd.

This is what this club was built for, just win one more home game and take the ultimate prize. LAFC was the best team in the regular season, has been lights out in the playoffs, and enters MLS Cup 2022 as the favorite to win its first MLS championship. If the team can do that, it might catapult them into the league’s next dynasty.

The city of Philadelphia is abuzz. The Phillies are in the World Series and two wins away from glory. The Eagles are 7-0 and a legitimate Super Bowl contender, and the Union is now a win away from winning its first MLS Cup. The Union certainly is strong enough to win it, but the team will have to do something it was just okay at and win on the road. The Union won seven road games this year, not terrible but also not spectacular.

The end was rather anticlimactic, but Austin FC had a wonderful season. The club’s atmosphere looked spectacular in every match, especially in the playoffs, and the club was 90 minutes away from MLS Cup. That’s not bad for a second-year franchise. The trick now will be to do it all again when everyone is watching and expecting greatness.

For a brief moment, it looked like NYCFC would pull off the upset. As it turned out, NYCFC was only able to flirt with that result. Their title defense over, this is a team that showed it could adjust to personnel changes and remain a contender in the unpredictable East.

Not reaching the Eastern Conference final was a letdown for CF Montreal. Despite entering the season with little expectations, the club finished the regular season as a bit of a power. The club now has a foundation but is also in a situation where no one will be underestimating them when the 2023 season begins.

FC Dallas had the unenviable task of visiting an Austin FC team that survived an early playoff scare and learned from it en route to the Western Conference final. FC Dallas did make a game out of it, losing 2-1, but the club just couldn’t overtake its Lone Star State rivals.

Finishing this high in the final rankings seemed inconceivable, but Cincinnati showed great improvement this season. This is a different offseason for a club that now needs tweaks. Get them right, and they might contend with Philadelphia and NYCFC for Eastern supremacy in 2023.

The Galaxy made its return to the postseason and won a match before exiting in a stoppage-time thriller at LAFC. That should only add to the motivation to keep up with their local rival as well as making sure that they’re not having to play their way into contention late next season.

New York’s season was strange. Expectations were low, but somehow the Red Bulls were greater than the sum of their parts. Come playoff time, when expectations existed and the Red Bulls had home-field advantage, it was the lower-seed advancing. While 4th vs 5th is supposed to be the toughest scenario, New York was the only home team not to advance.

In the other 4th vs 5th round one game, it was the 5th-seed not advancing and the first time in its three-year history that Nashville didn’t win a playoff game. In fairness to the new Western Conference team, the other two round one games in the West went to penalties showing just how close the conference table was in quality. On the upside, Hany Mukhtar won the league’s Most Valuable Player award, and the club opened GEODIS Park.

RSL’s little engine that could nearly pulled off a stunning upset. RSL took an early 2-0 lead at Austin FC but could not hold onto it and ultimately lost on penalties. The club did much better than expected as a known disrupter in the Western Conference.

Minnesota took FC Dallas all the way to penalties in the club’s thrilling playoff match. What they take from that is now the question, a familiar one to any team exiting in the opening round. What counts as improvement for next season is a question that may seem obvious, but the Western Conference won’t make it easy.

Orlando City played its way into the playoffs over the final week of the regular season, but playing at Montreal in a 2nd vs 7th match-up ended with a 2-0 loss. The club was strong enough to lift the US Open Cup and made sure they took the last seed in the East.

It’s interesting times for Inter Miami, finishing 6th in the East and exiting to NYCFC 3-0. Reports link the club with Lionel Messi, the kind of addition that would immediately change the scope of the club. As it stands, the Inter Miami technical staff has shown they can build a squad capable of surprising.

While Portland missed the playoffs by one point, it’s worth the reminder that they only lost two of their final 15 games, ending the season on a three-game winning streak. The club extended coach Gio Savarese’s contract through 2025 with an option for ’26.

This fall was tough. Columbus was strong enough to be a playoff team, and possibly more, but the club could not figure out how to close out games. The Crew blew a lead against Orlando in the season finale and missed the playoffs because of it.

Had the season been a month longer, or had Sporting KC played over the summer the way it finished the campaign, the club might have made it into the postseason. Sporting KC wasted no time in making a move to help stabilize the 2023 season by bringing in defensive midfielder Nemanja Radoja.

Vancouver still had life on the last day of the regular season before ultimately falling short. The club did have a solid group and should contend for the postseason a year from now. While it’s hard work shifting the spotlight from Seattle and Portland, Vancouver finished above the Sounders and a spot behind the Timbers.

Finishing just out of the playoffs in its first season, Charlotte set itself up for a solid start to 2023. Interim coach Christian Lattanzio did so well that the club extended his deal through the end of the 2024 season with an option for 2025. The club believes in the work that they started, and they should go up from here next year.

The unthinkable happened in 2022 – twice. Seattle won the Concacaf Champions League and also missed the MLS playoffs. The club is certainly talented enough to finish in the top seven of the Western Conference next season.

Colorado’s rise to prominence in the West came crashing down in 2022 after two consecutive playoff appearances. The Rapids did close out the season on a somewhat high note with a stoppage-time equalizer against Austin FC. They lost just once in their last six matches, but that doesn’t do much to take the sting off what could only be considered a disappointing season.

Last season’s other conference champions, this season New England was out of contention before Decision Day. The Revs have some decent pieces to build around, but the club is probably a couple of standout signings away from catching the likes of Philadelphia and NYCFC atop the Eastern Conference table.

Reports have Houston about to make a coaching hire and with it, the scope of their offseason will become clearer. As it stands, a 13th-place finish with the fourth-worst goal difference underlines their issues as they try to move on from this season.

The Luchi Gonzalez Era is not quite officially underway, but it is upcoming. Gonzalez was named coach in August, but the US national team’s assistant coach will not take over until following the World Cup. Gonzalez offers a promise of stability, more than the team has had in quite a while.

Chicago had just 39 goals last year, with only DC United finishing with fewer. That’s where the work starts, but they’ll also need to find a new goalkeeper with Gaga Slonina officially joining Chelsea. Chicago’s defense kept their goal difference relatively low, considering how few goals the team scored. Their -9 was the same as two teams that made the playoffs in the East.

Atlanta will need a replacement for striker Josef Martinez, who reportedly will not return for the 2023 season. That’s a major talking point, but it’s worth the reminder that we don’t know what this club might have looked like in 2022 without so many injury issues.

Italian sensations Federico Bernardeschi and Lorenzo Insigne will be there from the start of the 2023 season. Bob Bradley has a year under his belt in Toronto. The club will have to bring in some reinforcements, namely at goalkeeper, where the club parted ways with both the goalkeepers it used this season. Toronto also has an open Designated Player slot as part of a rebuild.

DC ended 2022 with four consecutive losses, the third time they’d gone four games in 2022 without taking a point. Dropping from 8th to 14th shows how quickly things can change over a season, but in MLS that works in both directions.