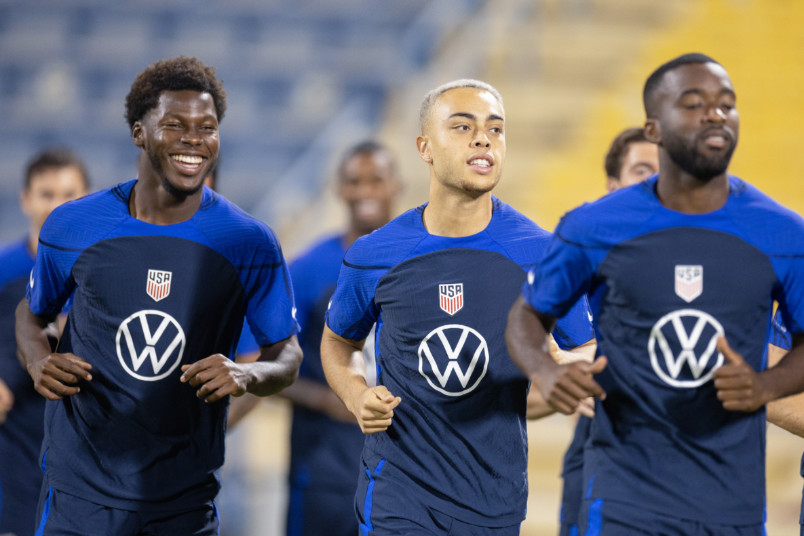 By Charles Boehm – AL-RAYYAN, QATAR (Nov 24, 2022) US Soccer Players – One of the mantras of Gregg Berhalter’s time in charge of the USMNT has been desire to change the way the world looks at American soccer. One of the best opportunities of his tenure to do so arrives with Friday’s Group B encounter with mighty England at Al Bayt Stadium north of Doha (2pm ET – FOX).

It’s a meeting with one of the global game’s most recognized national teams. Gareth Southgate’s squad is packed with top-shelf talents, many of them familiar names around the world. Berhalter and his players made clear that they are eager to test themselves against an opponent of this caliber, even with the Three Lions posing a major obstacle to their ambitions of reaching the knockout stages.

That might be doubly so for the many members of the team with ties to the country. Center back Cameron Carter-Vickers’s mother is English and his father is from Louisiana. Midfielder Yunus Musah lived half his childhood in London and spent significant time in England’s system before committing his international future to the USA last year. Eight players on this current USMNT roster are based at clubs in the Premier League and English Championship.

“Obviously when I saw the group was drawn and I saw we were in the same group with England, I was excited,” Carter-Vickers said on Wednesday. “They are one of the top teams in the world and to be able to play against them and match up against them to see where you’re at is a good thing, I think. In my family, half of them want us to win and half want England to win,” he added with a smile.

He and his teammates also know well the cachet that the EPL carries back home. Large and growing legions are consuming the wall-to-wall coverage available on US television. An even bigger, possibly record-breaking audience could tune in on Friday, given the high stakes of the match and that it coincides with the Thanksgiving holiday weekend.

“Every Saturday morning in America, waking up to watch the Premier League and seeing all the fan festivals they’re having – just, everyone now in America seems to have a team that they support,” said Berhalter on Thursday. “It’s an incredible league. We’re really proud to have our players playing in that league. And to me, it’s similar to the NFL in terms of how dominant it is and how commercial- orientated it is.”

The 6-2 win over Iran spearheaded by Matt Turner’s Arsenal teammate Bukayo Saka has made the Three Lions that much more daunting. Tyler Adams acknowledged on Thursday that this game is likely to unfold very differently than the Wales draw, with England capable of winning the possession battle and pushing the USMNT back into their own end for long stretches.

“I think England are currently one of the favourites to win the World Cup. I think that in a lot of games, people would probably say that we’re the underdogs. But we carry that with pride,” said Adams, who has shined in his first few months in the EPL with Leeds United. “It doesn’t mean anything to us to be underdogs, to be favorites, to be anything. We have to stay disciplined to what we do and every single day train well, perform in the games and show up. And we know that our quality can show and our determination can show.”

As highly rated as their current side is, England has yet to beat the USMNT in two World Cup meetings, the iconic 1-0 upset heard around the world in 1950 and 2010’s 1-1 draw in South Africa. In his pregame press conference, Southgate made clear that he’s quite aware of that fact.

“Have we ever beaten the States in a major tournament? No, I didn’t think so. So tomorrow, we have to try to make history, number one,” said the England manager. “We’ve got huge respect for our opponent. We know a lot of the players from our league, and we know the quality that they have and the athleticism that they have. So we’ve got to be at our best. … I don’t think we’ll be underestimating the USA team at all.”

This tournament’s schedule imposes quicker turnarounds between group-stage matches. After Monday’s draw Berhalter was asked about the physical recovery process. His answer underlined the collective anticipation for this fixture.

“This is a pretty easy one. You’re getting to play England. That’s the recovery right there,” he said. “You get to play one of the teams that we think is the favorite of the tournament. I think there’s not going to be many tired players come Friday.”

All 26 US players are categorized as fit and available for selection. A positive result would be extremely valuable in order to reduce the pressure around Tuesday’s group-stage finale vs Iran, which is expected to be an intense affair in its own right. And at its core, an occasion like this at the World Cup is simply the stuff that dreams are made of.

“We also want to show them what we’re capable of and that US soccer is growing and developing in the right way,” said Adams. “I think that when we step on the field against England, we have to ultimately be prepared or else a win is not possible.”