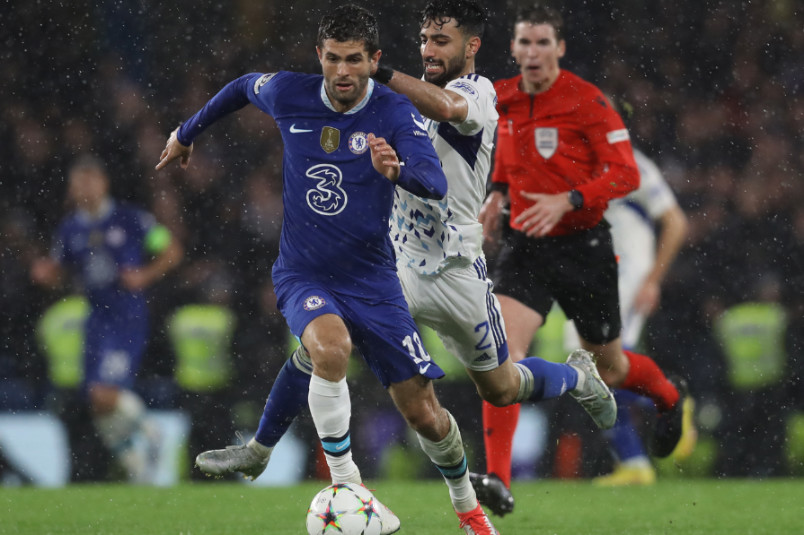 Thursday’s soccer news starts with Champions League group E, where Christian Pulisic subbed on in the 83rd minute of Chelsea’s 2-1 home win over Dinamo Zagreb. Chelsea fell behind in the 7th with Raheem Sterling equalizing in the 18th. Denis Zakaria gave them the lead in the 30th with Chelsea advancing as group E winners.

Also in group E, Sergino Dest wasn’t in the squad for AC Milan’s 4-0 home win over Red Bull Salzburg with Milan advancing in 2nd-place. Olivier Giroud put AC Milan up in the 14th, Rade Krunic doubled the lead in the 46th, and Giroud scored again in the 57th minute. Junior Messias scored Milan’s fourth goal a minute into stoppage time.

Gio Reyna subbed out in the 63rd minute of Borussia Dortmund’s 1-1 draw at FC Copenhagen, finishing 2nd in group G. Thorgan Hazard scored for Dortmund in the 23rd and Copenhagen equalized in the 41st minute.

“It was a deserved draw,” Borussia Dortmund coach Edin Terzic said. “There were lots of scoring opportunities at both ends. We needed a bit of time to find our way into the game; we were not aggressive enough with our pressing and wanted to win the ball back while jogging. We were able to play the game more quickly in the second half, both on the ball and off it too. The substitutions gave us some fresh momentum. But we didn’t manage to score – and gave away too much too.”

John Brooks was on the bench for Benfica’s 6-1 win at Maccabi Haifa to take 1st-place in group H on a tiebreaker over PSG. Goncalo Ramos scored for Benfica in the 20th with Maccabi Haifa equalizing from the penalty spot in the 26th. Benfica retook the lead from a Petar Musa goal in the 59th with Alejandro Grimaldo doubling the lead in the 69th. Benfica added goals from Rafa (73rd), Henrique Araujo (88th), and Joao Mario two minutes into stoppage time.

“When you are first there are several advantages because you play against a runner-up and the second game, the 2nd leg of the round of 16 is at home,” Benfica coach Roger Schmidt said. “That is important, but not only. It is also important for the players and for the prestige of the club. It is a great achievement.”

Staying in group H, Weston McKennie wasn’t in the squad for Juventus in their 2-1 home loss to PSG. Trailing from the 13th minute, Leonardo Bonucci equalized for Juventus in the 39th. PSG went ahead for good in the 69th minute. Juventus finished 3rd in the group, dropping to the Europa League.

“The performance was good, but we must be angry, because we are out of the Champions League,” Juventus coach Massimiliano Allegri said. “We want to play against the best, but we were deservedly eliminated and this anger must not pass. Against PSG we conceded too much of the play, and as a result we conceded two goals. However, we must now think positively and look ahead to the Inter game – a very physical opponent who plays well.”

Cameron Carter Vickers wasn’t in the squad for Celtic’s 5-1 loss at Real Madrid in group F. Celtic fell behind to penalties in the 6th and 21st minutes with Real Madrid adding goals in the 51st, 61st, and 71st. Jota scored Celtic’s goal in the 84th minute. Celtic finished 4th in the group with Real Madrid and RB Leipzig advancing and Shakhtar Donetsk dropping to the Europa League.

Ligue 1 on beIN Sport: Troyes vs Auxerre at 4pm. La Liga on ESPN Deportes: Girona vs Athletic at 4pm. Primeira Liga on GolTV: Gil Vicente vs Portimonense at 4:15pm ET.