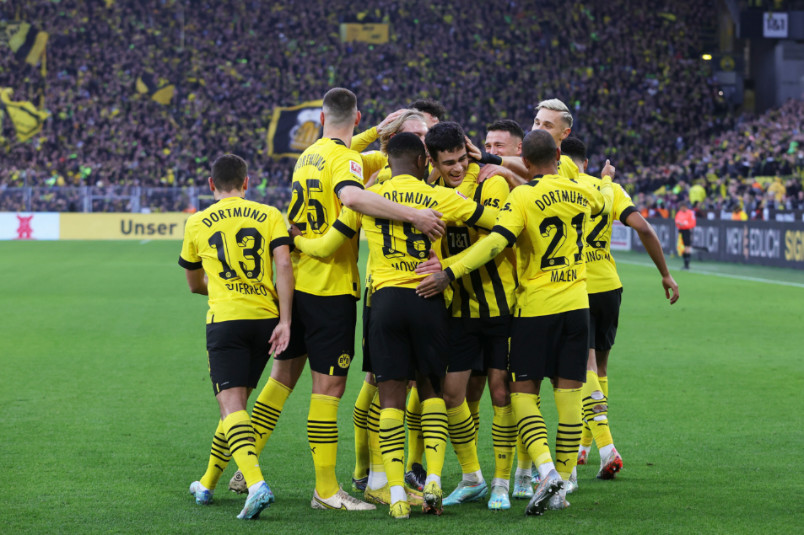 The roundup of USMNT players in Europe and Brazil starts in the Bundesliga with Joe Scally’s Gladbach winning 3-1 at home over VfB Stuttgart. Jonas Hoffman put Gladbach up in the 4th with Marcus Thuram doubling the lead in the 25th. Stuttgart pulled a goal back in the 35th, but Patrick Hermann finished off the Gladbach goals four minutes into stoppage time. Gio Reyna subbed out in the 67th minute of Borussia Dortmund’s 3-0 home win over VfL Bochum. Youssoufa Moukoko put Dortmund up in the 8th with Reyna converting a 12th minute penalty. Moukoko scored again two minutes into first-half stoppage time.

“We absolutely wanted to win the final home game of this calendar year,” Borussia Dortmund coach Edin Terzac said. “We showed a good tempo from the beginning and got the early reward. We wanted to keep our foot on the gas once it went to 2-0; unfortunately, that didn’t work so well, and we were also slightly lucky with the offside goal. It was only the tip of a toe that determined whether it was a goal or not. It was important to get the home victory. We now have two more exciting challenges ahead. We have created the basis to perform with a lot of self-confidence in them.”

Jordan Pefok’s Union Berlin lost 5-0 at Bayer Leverkusen to goals in the 46th, 56th, 58th, 67th, and 76th minutes. Pefok saw yellow in the 26th minute. A league down, Terrence Boyd’s Kaiserslautern won 3-2 at Arminia Bielefeld. Playing a man up from a 45th minute red card to Arminia’s Bryan Lasme, Kaiserslautern’s Philipp Klement scored in the 54th with Aaron Opoku making it 2-0 in 57th. Arminia’s Robin Hack scored in the 60th and equalized from the penalty spot in the 73rd. Daniel Hanslik scored Kaiserslautern’s winner in the 88th minute.

Haji Wright’s Antalyaspor beat Fatih Karagumruk 4-2 at home in the Super Lig. Trailing 2-0 from goals in the 4th and 19th minutes, Eright scored in the 35th and Guray Vural equalized in the 41st. Veysel Sal put Antalyaspor up two minutes into first-half stoppage time and Vural scored in the 84th.

Tyler Adams and Brenden Aaronson’s Leeds United won 4-3 at home over Bournemouth in the Premier League. Aaronson subbed out in the 86th minute. Rodrigo Moreno put Leeds up from the penalty spot in the 3rd minute. Bournemouth equalized in the 7th, scoring again in the 19th and 48th minutes. Sam Greenwood pulled a goal back for Leeds in the 60th, Liam Cooper equalized in the 68th, and Crysencio Summerville scored in the 84th minute.

Cameron Carter-Vickers’s Celtic won 4-2 at home over Dundee United in the Premiership. Sead Haksabanovic put Celtic up in the 6th with Dundee United equalizing from the penalty spot in the 12th minute. Haksabanovic scored again in the 34th with Dundee United equalizing in the 87th. Kyogo Furuhashi put Celtic up for good in the 90th with Liel Abada scoring two minutes into stoppage time. James Sands and Malik Tillman’s Rangers lost 2-1 at St Johnstone. Trailing from goals in the 41st and 62nd minutes, James Tavernier scored for Rangers in the 74th minute. Tillman subbed out in the 61st and Sands subbed out in the 79th.

Yunus Musah subbed out in the 75th minute of Valencia’s 1-1 draw at Real Sociedad in La Liga. Trailing from a 10th minute own-goal and up a man from the 17th, Valencia’s Samuel Lino equalized in the 25th minute. Erik Palmer-Brown’s Troyes drew 1-1 at home with Auxerre in Ligue 1. Rony Lopes scored for Troyes in the 28th and Auxerre equalized in the 86th. Tim Weah’s Lille drew 1-1 at home with Rennes. Jose Fonte put Lille up in the 16th with Rennes converting a 58th minute penalty and seeing red in the 90th minute. Andrija Novakovich’x Venezia lost 1-0 at Como in Serie B to a 65th minute goal.

Cole Bassett subbed on in the 62nd minute of Fortuna Sittard’s 1-0 home loss to Emmen in the Eredivisie. Emmen scored in the 58th minute. Ricardo Pepi’s Groningen lost 2-1 at Utrecht. Florian Kruger scored for Utrecht in the 40th with Utrecht equalizing in the 62nd and going ahead in the 84th minute.

Mark McKenzie’s KRC Genk won 4-1 at home against Charleroi in the Belgian Pro League. Paul Onuachu converted a 9th minute penalty, scoring again in the 35th. Charleroi pulled a goal back in the 66th, but Onuachu added goals in the 71st and five minutes into stoppage time. Bryan Reynolds’s Westerlo drew 1-1 at Union St-Gilloise. Lyle Foster scored for Westerlo in the 45th with Union St-Gilloise equalizing two minutes into stoppage time.

Joe Gyau’s Degerfors drew 2-2 at Malmo in the Alsvenskan. Hugo Larsson scored in the 18th minute for Malmo with Omar Faraj equalizing in the 37th. Isaac Thelin returned the Malmo lead in the 61st with Rasmus Orqvist equalizing for Degerfors in the 64th minute.

Reggie Cannon subbed out in stoppage time for Boavista in their 1-0 loss at Rio Ave in the Primeira Liga. Rio Ave scored in the 64th minute. Ulysses Llanez subbed on in the 62nd minute of St Polten’s2-1 home win over Lafnitz in the Erste Liga. St Polten’s Luis Hartwig scored in the 34th with Lafnitz equalizing in the 37th. Llanez assisted on Doginmani Silue’s goal in the 84th minute. Kenny Saief’s Neftchi drew 2-2 at Sumqayit in the Azerbaijan Premier League. Falling behind in the 41st, Neftchi’s Godsway Donyoh equalized in the 47th. Falling behind again in the 61st, Neftchi’s Ataa Jaber equalized in the 87th minute.

Johnny Cardoso subbed out in the 83rd minute of Internacional’s 2-0 home win over Athletico-PR in Brazil’s Serie A. Pedro Henrique scored for Internacional in the 63rd and Mauricio doubled the lead in the 67th. Athletico-PR saw red a minute into stoppage time.