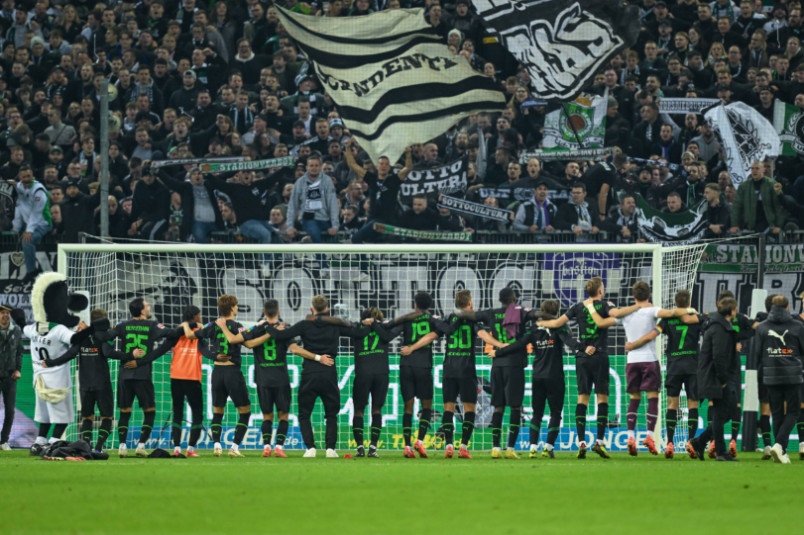 The last roundup of USMNT players in Europe and Brazil before the World Cup break starts in the Bundesliga with Joe Scally’s Gladbach beating Gio Reyna’s Borussia Dortmund 4-2. Reyna subbed out at halftime. Gladbach’s Jonas Hoffman scored in the 4th minute with Julian Brandt equalizing for Dortmund in the 19th. Gladbach took the lead from a 26th minute goal and Marcus Thuram made it 3-1 in the 30th. Nico Schlotterbeck pulled a goal back for Dortmund in the 40th, but Kouadio Kone added a fourth Gladbach goal in the 46th.

“I’m very happy with the way we went about the game and believe that we deserved the scoreline,” Gladbach coach Daniel Farke said. “Both teams were at a very high level in the first half – that was a great advert for the Bundesliga. We showed more courage under pressure and covered more ground to help us work the ball out. The lads also stuck to the plan when it came to dealing with Dortmund’s press.”

George Bello subbed on in the 82nd minute of Arminia Bielefeld’s 3-1 home win over Magdeburg in the 2.Bundesliga. Terrence Boyd subbed out in the 81st minute of Kaiserslautern’s 2-1 win at Fortuna Dusseldorf. Falling behind in the 14th minute, Kaiserslautern’s Kevin Kraus equalized in the 50th and Philipp Klement converted a penalty six minutes into stoppage time. Julian Green subbed on in the 21st minute of Furth’s 1-1 draw at Darmstadt. Down a goal from the 2nd minute, Damian Michalski equalized for Furth in the 42nd. Furth’s Gideon Jung saw red in the 48th minute.

Tyler Adams and Brenden Aaronson’s Leeds United lost 4-3 at Spurs in the Premier League. Leeds took the lead from a Crysencio Summerville goal in the 10th minute with Spurs equalizing in the 25th. Rodrigo Moreno returned United’s lead in the 43rd with Spurs equalizing in the 51st. Moreno scored again for Leeds in the 76th, but Spurs responded with goals in the 81st and 83rd minutes. Adams saw red in the 87th minute.

Christian Pulisic subbed on at halftime for Chelsea’s 1-0 loss at Newcastle to a 67th minute goal. Tim Ream and Antonee Robinson’s Fulham lost 2-1 at home to Manchester United. Fulham fell behind to a 14th minute goal with David James equalizing in the 61st. Manchester United scored again three minutes into stoppage time.

Daryl Dike subbed on in the 90th minute for West Brom’s 2-0 home win over Stoke City in the Championship. West Brom’s Kyle Bartley scored in the 39th and Brandon thomas-Asante doubled the lead in the 50th. Duane Holmes subbed on in the 65th minute of Huddersfield Town’s 0-0 home draw with Swansea City. Ethan Horvath’s Luton Town drew 1-1 at home with Rotherham United. Luton fell behind in the 1st minute with Luke Berry equalizing in the 90th.

Zack Steffen and Matthew Hoppe’s Middlesbrough won 2-1 at Josh Sargent’s Norwich City. Hoppe subbed on in the 75th. Norwich took the lead from a 7th minute Sargent goal with Boro’s Riley McGree equalizing in the 64th and Matt Crooks scoring two minutes into stoppage time. Sargent subbed out in the 84th.

Cameron Carter-Vickers’s Celtic won 2-1 at home over Ross County in the Premiership. Celtic fell behind to a 50th minute penalty with David Turnbull equalizing in the 62nd. Sead Haksabanovic scored for Celtic in the 68th minute. James Sands and Malik Tillman’s Rangers drew 1-1 at St Mirren. Trailing from the 47th, James Tavernier equalized for Rangers from the penalty spot in the 84th.

Erik Palmer-Brown’s Troyes lost 2-1 at Brest in Ligue 1. Brest went ahead from a 55th minute penalty, giving up a 60th minute own-goal but converting another penalty in the 77th. Troyes’s Mama Balde saw red in the 80th minute. Tim Weah’s Lille beat Angers 1-0 at home. Lille’s Tiago Djalo scored in the 36th with Carlos Baleba seeing red in the 74th.

Sergino Dest subbed on in the 56th minute for AC Milan in their 2-1 home win over Fiorentina in Serie A. Rafael Leao scored for AC Milan in the 2nd with Fiorentina equalizing in the 28th. Milan went up for good from an own-goal a minute into stoppage time. In Serie B, Gianluca Busio started and Andrija Novakovich subbed on in the 70th minute of Venezia’s 2-1 home loss to Reggina. Venezia’s Joel Pohjanpalo scored in the 10th with Reggina equalizing in the 55th and going ahead in the 76th minute.

Ricardo Pepi’s Groningen lost 3-2 at home to Cole Bassett’s Fortuna Sittard in the Eredivisie. Bassett subbed out in the 58th. Pepi put Groningen up in the 45th with Fortuna’s Paul Gladon scoring in the 78th and 84th minutes. Groningen’s Florian Kruger equalized a minute into stoppage time. Fortuna’s Tijjani Noslin scored five minutes into stoppage time.

Mark McKenzie’s KRC Genk won 2-0 at Anderlecht. Paul Onuachu scored in the 19th and Gerardo Arteaga doubled the lead in the 53rd. Arteaga saw red in the 74th. McKenzie saw yellow in the 86th minute. Bryan Reynolds subbed out in the 78th minute of Westerlo’s 6-0 home win over Oostende. Nene Dorgeles scored in the 16th, Tuur Dierckx doubled the lead in the 28th, and Nacer Chadli converted a penalty in the 40th. Lyle Foster added goals in the 49th and 53rd, and Halil Akbunar finished off the scoring in the 81st minute.

Reggie Cannon’s Boavista lost 4-1 at home to Porto in the Primeira Liga. Porto went up in the 41st with Cannon seeing red in the 58th. Porto scored again in the 64th and 83rd with Boavista’s Kenji Gorre scoring a minute into stoppage time. Porto added a fourth goal a minute later.

Ulysses Llanez subbed on in the 62nd minute for St Polten in their 4-0 home win over Amstetten in Austria’s 2.Liga. Jaden Montnor scored in the 6th and Luis Hartwig doubled the lead in the 14th. Montnor made it 3-0 in the 21st and scored again in the 51st minute.

Kenny Saief’s Neftchi beat Qebele 2-0 in the Azerbaijan Premier League. Saief opened the scoring in the 24th and Rahman Haciyev doubled the lead in the 76th. Saief saw yellow in the 24th minute. Int he Cypriot First Division, Mix Diskerud subbed on in the 81st minute of Omonia’s 4-0 home win over Olympiakos. Loizoz Loizou scored in the 31st and Gary Hooper made it 2-0 Omonia in the 61st. Tim Matavz added a goal in the 75th and Andronikos Kakoullis finished off the scoring in the 78th minute.