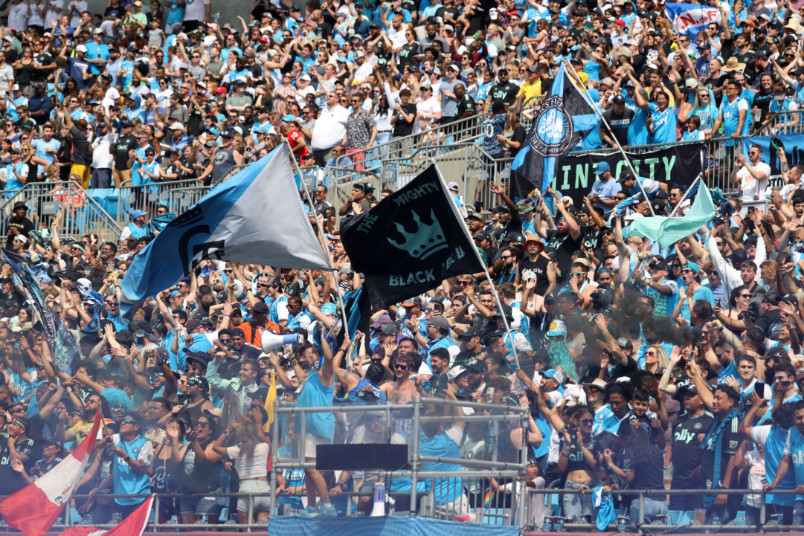 By Jason Davis – WASHINGTON, DC (Dec 28, 2022) US Soccer Players – If 2022 was anything for soccer, it was eventful. With the World Cup on the schedule, that was a guarantee. However, the World Cup wasn’t the only thing in the soccer world to make a mark on 2022. That was especially true in American soccer. The USMNT getting to and then playing in the World Cup were the big stories, but a select set of achievements and player moves merited headlines of their own.

In February, MLS welcomed a new team to its ranks when Charlotte FC began play as the league’s 28th franchise. Adding teams is hardly new for MLS. The league has expanded every year since 2017. Still, not every club makes the kind of impact that Charlotte FC did, however. Charlotte ultimately missed the playoffs in its first season, but it was the sheer size of its support that made it a notable addition to the league.

Charlotte FC set a new MLS attendance record on March 5th when it reported a crowd of 74,479 for its inaugural home game against the LA Galaxy, breaking the mark set by Atlanta United for the 2018 MLS Cup final.

That achievement served multiple purposes for the brand-new outfit. It sent a message around the region and the country that there were soccer fans ready to support the game in the area, beyond the normal capacity of a soccer-specific stadium. Charlotte averaged over 35,000 fans a game in 2022, second only to Atlanta.

A few weeks after Charlotte’s home opener, the Seattle Sounders delivered a long-delayed result for Major League Soccer. The Sounders closed out a two-legged tie against UNAM Pumas of Mexico with a 5-2 aggregate scoreline and secured the first Concacaf Champions League title for an MLS team. The 2022 version of the most successful MLS team of the last decade was built for exactly the challenge it achieved, capping an era that saw the Sounders win two MLS Cups and reach two other finals.

At the core of the Sounders’ triumph was successful recruiting and efficient spending. Their squad possessed foreign swagger via the likes of Raul Ruidiaz, Nico Lodeiro, and Joao Paulo, while also leveraging top American talents like Jordan Morris and Cristian Roldan. On the way to the trophy, Seattle beat two Liga MX teams and the defending MLS Cup champions. Though the Sounders eventually missed the MLS playoffs for the first time after a raft of injuries through the regular season, 2022 can only be called a success.

The success of Americans outside of the United States came in several forms. For one, it wasn’t about winning a championship, but about avoiding the drop into a division called the Championship.

Jesse Marsch’s arrival in Leeds in late February put an American manager in the Premier League for only the third time in history, and put Marsch back on the sideline following his departure from RB Leipzig in December of 2021.

It also brought incredible pressure. Leeds hired Marsch to coach the final four months of the season after dismissing Marcelo Bielsa, a beloved figure who had lifted Leeds back to the top flight of English soccer for the first time since 2004. Whatever Marsch did would be judged by supporters against the charming professorial bearing of Bielsa.

The American manager’s unstaid style and penchant for speaking his mind won him some love in Yorkshire. It also had some ready to revel in his failure. Marsch didn’t fail. On the Premier League’s final matchday, Marsch’s Leeds defeated Brentford on the road to secure survival for 2022-23. The win also ensured that Marsch would get the chance to remold the team to his liking for the next season.

Part of that process involved turning to two Americans to bolster the squad. Leeds handed Marsch the funds necessary to secure the signings of former Philadelphia Union attacker Brenden Aaronson and former New York Red Bulls midfielder Tyler Adams. Leeds spent $24 million upfront on Adams and $30 million on Aaronson. The transfers represented a triumph for both players and for the MLS clubs that developed them. There was never any doubt that the pair could hack it at the Premier League level, but both Adams and Aaronson thrived at Leeds before joining the USMNT for the World Cup.

Back in the league where Leeds’ pair of Americans began their careers, an epic battle for the championship was unfolding. Aaronson’s old team, the Philadelphia Union, was setting new marks for defensive dominance and goalscoring explosions. On the other side of the country, high-profile LAFC was putting in a historic effort under the leadership of USMNT great Steve Cherundolo.

Through a summer when it looked like LAFC was marching towards a new season point record, the Union hammered opponents with big scorelines. When LAFC faltered, it looked like Philadelphia might nip them for the points title. When the season ended, only the most wins tiebreaker separated them.

LAFC won the Supporters’ Shield, but winning an MLS Cup would be a different challenge. Cherundolo’s team played a classic against the Galaxy, ran over Austin FC, and earned the right to host the final. The Union in the East handled FC Cincinnati and exacted revenge on NYCFC for the 2021 conference final loss to book its place in the final.

The final was everything anyone could have wanted. For a league that so rarely gets matchups of its best regular season teams, the game in Los Angeles felt historic. It played out with giant swings of momentum leading to an extra time that delivered goals in the 120+4′ (Union) and 120+8′ (LAFC).

Gareth Bale’s last-second goal pushed the game to penalties, where LAFC prevailed thanks in large part to the heroics of backup goalkeeper John McCarthy, a former Union player. It all felt incredible.

Cherundolo joined a select group of coaches to win an MLS Cup in their first season. LAFC is now part of a group of eight teams to achieve a Supporters Shield/MLS Cup double.