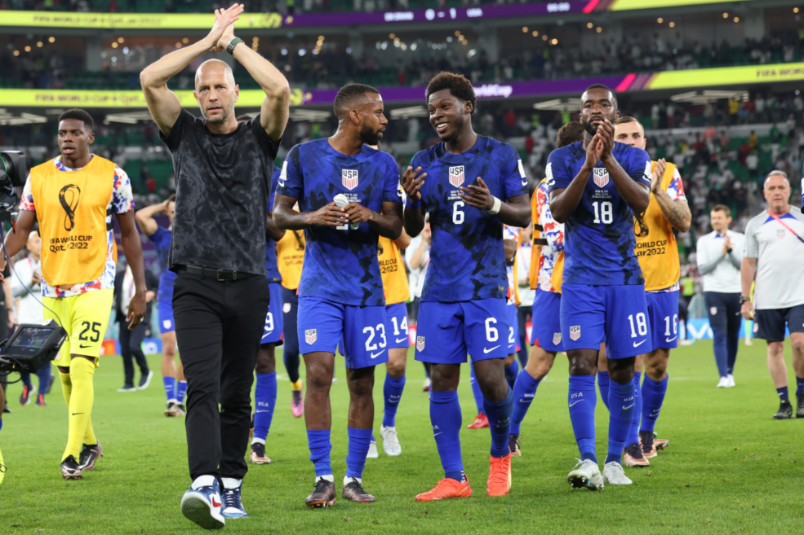 By Charles Boehm – AL-RAYYAN, QATAR (Dec 1, 2022) US Soccer Players – It takes a certain underrated level of courage to say out loud that your goal is to win the World Cup. Especially when you’re not from one of the sport’s traditional powerhouses. Many overseas journalists have asked the USMNT how their experience at Qatar 2022 will help them when the tournament arrives in North America in four years’ time.

Credit is due to the Yanks for being honest about their ambitions. They’ve waved off 2026 as the distant future, too far away to think about now. They believe they can do more, much more, in Qatar. In a World Cup that’s already sprung some surprises, why not keep going?

“We’re excited to win. But we have so much more from this group, so much more expectation from this team,” said Walker Zimmerman after Tuesday’s nail-biting 1-0 win over Iran. “The whole environment, we said from the very beginning, we’re unpacked, we’re here till December 19 in our head.”

That’s the mindset heading into Saturday’s round of 16 game with the Netherlands (10am ET – FOX). The Dutch are 8th in the FIFA rankings, favored by most conventional wisdom. USMNT coach Gregg Berhalter has framed this as two tournaments in one, though, with the knockout stages a different beast. In that one-off environment, “anything is possible,” he reminded his players after the win over Iran.

After playing three high-intensity matches in eight days, the US again get just three days’ rest before this huge test. That’s not ideal, though it could be even worse. The likes of Australia and Argentina will have one day less than that. The hope is that the rhythm of constant midweek club matches in the COVID-compressed schedules of the past two years have acclimated both bodies and minds.

Berhalter and his players have made sure to praise the technology and expertise of their performance department. A big question is whether the high tempo and sharp pressing that the USMNT have shown in their best moments will be sustainable for long periods against the Dutch, known for their possession mastery.

Meanwhile, the Oranje eased through group A, taking seven points from nine and conceding just one goal en route to a first-place finish. PSV Eindhoven winger Cody Gakpo has been the surprise star, scoring three goals, joint-tops in the World Cup golden boot race. Virgil van Dijk has been a commanding presence at the heart of defense. Frenkie de Jong and Davy Klaassen have been key influences in central midfield.

The Netherlands have generally controlled the pace of their three matches to date. Does that factor take precedence over attacking more aggressively? This is the balance coach Louis van Gaal needs to find against the United States.

Meanwhile, the USA waits on final confirmation of Christian Pulisic’s availability. Pulisic told the media that he’s “doing everything in my power to be able to be out there on the field on Saturday.” Berhalter has a few other big decisions to make with his lineup.

The Tim Ream – Walker Zimmerman central defense partnership was excellent in the USMNT’s first two matches. The coach made a calculated gamble in swapping Cameron Carter-Vickers for Zimmerman against Iran, reasoning that Carter-Vickers was more familiar with facing a packed defense thanks to his club Celtic’s usual dominance in the Scottish Premier League. That paid off, and Zimmerman also shined when he came off the bench as the US shifted to a 5-4-1 formation late on, making a game-high eight clearances.

Josh Sargent is nursing an ankle injury that is also officially categorized as “day to day.” He started two of the three group-stage games at the #9 spot, and Berhalter could look to Haji Wright again, or give Jesus Ferreira his first action of the World Cup. The coach will also want to make sure his midfield trio of McKennie, Tyler Adams, and Yunus Musah are ready to go at full bore yet again after expending enormous amounts of energy in the group stage.

The USMNT has shown impressive tactical flexibility at the tournament. They shifted out of their usual 4-3-3 formation to a 4-4-2 to frustrate England, then used five at the back to deal with Iran’s late barrage of crosses and numbers in the penalty box. With the Dutch generally operating in a 3-4-2-1, it wouldn’t be shocking if Berhalter produced a new wrinkle in hopes of carving out an advantage.

Adams has spoken of the importance of small details and fine margins at this level. It’s likely to be even more the case in the round of 16.

“It’s a great opportunity,” said Berhalter of testing themselves against the Dutch. “But it’s not something that we’re going into it thinking it’s an honor. We deserve to be in the position that we’re in and we want to keep going.”