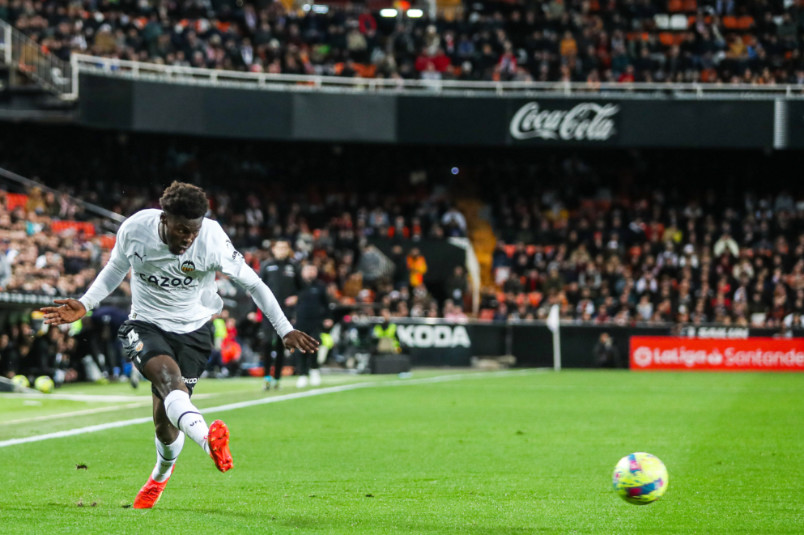 “I think that it is a problem when you take the lead twice in a game like today, and we got the two goals as we wanted, for it to then be very easy for them to equalize,” Valencia coach Gennaro Gattuso said. “They had a dead ball and other chances and they hurt us with very little.”

Tim Ream and Antonee Robinson’s Fulham lost 1-0 at home to Spurs to a first-half stoppage time goal. “Some moments when we won the ball, we lost the ball too quickly again, and after a fast corner kick came that goal from Kane,” Fulham manager Marco Silva said. “Of course it was decided by a great footballer, but if you are in a good position then that moment will not happen, for sure. We lost the control in that three minutes and we were punished by that, from a great finish from him, but we were punished by that.”

Reggie Cannon subbed on in the 90th minute of Boavista’s 1-1 home draw with Chaves. Yusupha Njie scored for Boavista in the 27th with Chaves equalizing in the 88th minute.

Later today, Sergino Dest’s AC Milan is at Lazio in Serie A, with 2nd-place AC Milan on 38 points from 18 games played and trying to hold off 3rd-place Inter Milan and 4th-place Roma a point behind them. AC Milan trails 1st-place Napoli by 12 points with a game in hand. In the league, they’re coming off of two consecutive draws, undefeated since a loss at Torino on October 30, but lost the Supercoppa Italiana final last week 3-0 to Inter.

“We have to face these difficult moments, it will be another test to overcome with unity and humility,” AC Milan coach Stefano Pioli said “The criticism is fair because our performances in this period are below our expectations, which are very high because we are AC Milan. We have endured experiences where we faced everything with more ease, now we need compactness and the will to react. They have been ten difficult days, in which we played a lot, more than usual. I have a lot of confidence in my players.”

Richy Ledezma’s PSV is at FC Emmen in the Eredivisie after beating Vitesse Arnhem 1-0 at home on Saturday. PSV is 3rd in the league with 35 points from 17 games, trailing AZ by a point and ahead of FC Twente by a point. Feyenoord leads the Eredivisie with 38 points while Ajax is in 5th-place on 33.

HBO Max and Universo has the USMNT vs Serbia friendly at 10pm ET.