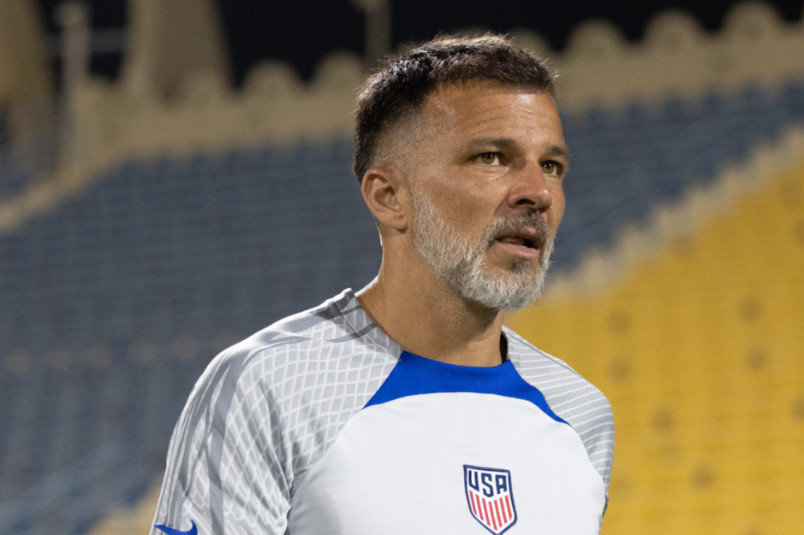 By Jason Davis – WASHINGTON, DC (Jan 20, 2023) US Soccer Players – The 2023 edition of the USMNT’s January camp arrives at the beginning of a new World Cup cycle, one that will culminate with the tournament taking place in North America. Even at the far front edge of the journey to 2026, there’s excitement around the possibilities.

The man in charge of the USMNT, assistant coach Anthony Hudson, has called up 24 players to California for a training period that will culminate with friendlies against Serbia on January 25 at newly renamed BMO Stadium and Colombia on January 28 at Dignity Health Sports Park.

These games won’t take place in a FIFA window, so like the United States, both Serbia and Colombia have called teams heavily populated by players currently out of season or on an extended winter break. That doesn’t mean there won’t be notable and talented names on the rosters for both countries. Both nations have players based in MLS that will be familiar to American fans.

Serbia’s SuperLiga resumes play on February 4. The roster of 17 players called up by head coach Dragan Stojkovic is stocked with players from the domestic league with a decided focus on youth. The average age of the team headed to California to face the USMNT is 22.8 years.

Only three players in the team have any senior caps: Djordje Petrovic (1), Ranko Veselinovic (1), and Dejan Joveljic (2), who happen to be the team’s three MLS-based names. All are 23 and still in the early stages of their professional careers.

Of the three, Petrovic is the youngest and most recent arrival on North American shores. A product of Serbian SuperLiga club FK CukariCki, Petrovic arrived in MLS in April of 2022 as the Revolution’s chosen replacement for outgoing goalkeeper Matt Turner. To say that Petrovic had a tough act to follow in Foxborough would be an understatement. Turner was the league’s top keeper in 2020 and 2021, the season he took home the MLS Goalkeeper of the Year Award on the strength of a Supporters’ Shield-winning campaign for the club.

But Petrovic adapted quickly to MLS and showed he was capable of filling his American predecessor’s big boots. In 27 starts, Petrovic conceded 27 goals and collected seven clean sheets. His regular season performance was enough to earn Petrovic recognition as a Newcomer of the Year Award finalist, where he finished third behind Atlanta’s Thiago Almada and Columbus’s Juan “Cucho” Hernandez.

Petrovic’s lone cap for his country came against the Dominican Republic in a January 2021 friendly. With just two keepers on the roster and with the game happening in the country where Petrovic plays his club soccer, he’ll likely be the starter against the US.

Veselinovic and Joveljic have played in MLS since 2021. Veselinovic arrived in Vancouver on loan from Vojvodina in Serbia in February of 2020 and played 18 games at center back during that truncated campaign. The ‘Caps executed a purchase option on the loan in October of that year, and Veselinovic has been a regular starter for the club ever since. Serbia’s small squad for the trip to California includes two other center backs, both of whom play in the SuperLiga and have yet to make a senior national team appearance.

The last of the MLS trio in Serbia’s group is the most experienced international on the list: LA Galaxy forward Joveljić, who possesses a grand total of two caps. LA’s super-sub earned both his Serbia appearances in June of 2021 when he got on the field against Jamaica and Japan in a pair of friendlies for full 90-minute shifts. He did not score in either game and will be looking for his first international goal against the Americans.

Colombia’s roster for its friendly with the United States outdoes Serbia’s on both experience and geography. Colombia has tapped six MLS-based players for its 20-man roster under head coach Nestor Lorenzo. Two are goalscorers: LAFC forward Cristian “Chico” Arango and Cucho Hernandez of Columbus. Arango has a single cap for his country, while Hernandez has two, though only Hernandez has scored for Colombia, something he has done twice.

The experience in the team comes mostly from defender Frank Fabra, who has 26 caps. A handful of players across the rest of the squad have one, two, or three senior international appearances.

Hernandez is the prospect, while Arango is the more seasoned hand with a respectable career. After arriving in Ohio from Watford last season on a reported 8-figure transfer, Hernandez took MLS by storm with a blistering return of nine goals in 16 appearances (14 starts). At 23, Hernandez is part of a group of younger Colombian center forwards looking to succeed Colombian soccer legend Radamel Falcao as the country’s line leader.

Arango helped LAFC to two trophies in 2022 and rates among the most dangerous strikers in MLS. His 16 goals last season put him ninth on the league scoring list. Lorenzo may choose to split time between the two natural center forwards.

Colombia is rich with talented young wingers across its player pool. The roster for the January friendly is a reflection of that depth. Lorenzo picked two other MLS players for his forward group, both of whom are usually deployed on the wing.

Portland’s Santiago Moreno appeared in every game the club played in 2022, starting 28. Moreno was a U-22 Initiative signing from America de Cali in July of 2021 and has already made a significant impact in just short of 2,800 minutes since arriving. His seven goals and eight assists last season tied him with Sebastian Blanco for the team lead in the combined categories.

21-year-old New England Revolution attacker Dyland Borrero arrived in MLS last year and collected just over 600 minutes during the regular season. Borrero looked bright and clearly has potential, but remains in his adjustment period after making the move from Atletico Mineiro in Brazil. He scored three goals in 2022 and added two assists in 12 appearances. Defenders Andre Reyes of the Red Bulls (695 minutes in 2022) and Juan Mosquera of the Timbers (189 minutes in 2022) round out the MLS contingent for Colombia.