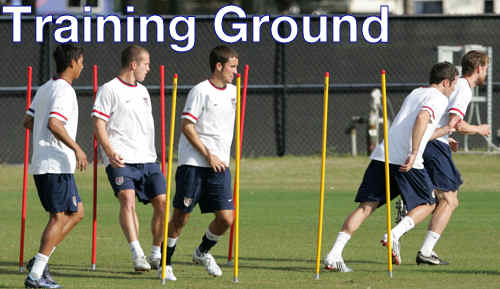 When children start playing soccer at younger ages (U-6 and U-8), the emphasis should be on small-sided soccer. At these ages, teams should use a 3 v 3 or 4 v 4 without goalkeepers. They will eventually move to a 5 v 5 with a goalkeeper when they get to U-7 or U-8. The small-sided game maximizes the number of touches each player gets, and also gives them an opportunity to understand the basic concepts of the game.

At these beginning levels, the players are just starting to learn how and when to pass the ball, and you may have begun to introduce the concept of positions (for example, in 5 v 5 you may designate one or two players at a time to be “defenders,” or, to be certain that they get back on defense every time).

You may play 7 v 7 or 8 v 8 (including a goalkeeper) and it is often difficult to decide on a proper formation.

There are advantages and disadvantages to all of these formations. A 3-3 may give you a solid defense and a solid offense, but there is the risk of large gaps between the forwards and the defenders. This makes it difficult for the defenders to get the ball to the forwards, and leads to a situation in which three of your players are playing and the other three are watching and waiting. For example, either the forwards are working together in your offensive end to try and score while the defenders are standing and watching at midfield; or, the defenders are fighting an attack while the three forwards stand near midfield, waiting for the defenders to get the ball out to them. With a 2-2 the midfielders have to run a great deal. They will either stay close to each other and cover the entire width of the field, or stay just in front of the defenders, or stay just behind the forwards, often getting involved in the offensive third of the field.

Triangles tend to be an important shape in soccer. The players can form triangles in the 2-2-2 by staggering the lines as play occurs, but the formation can still lead to the players remaining in two straight lines. The 1-2-2-1 and 1-2-1-2 create the triangle relationships from the get-go, but can leave gaps in the field or can result in a single player covering the entire width of the field at his or her position. The 2-2-2, 1-2-2-1, and 1-2-1-2 formations will all present challenges for the coach seeking to have his or her players use the full width of the field.

Whatever formation you decide upon, as a coach you will then need to communicate the concepts behind the positions to your players. Some players learn on the field. Others learn by looking at a diagram. Others learn well from reading and re-reading a textual description of their responsibilities.

Responsibilities Of A Defender

Must be goal side of opponents whenever other team has the ball.

The first defensive responsibility is to slow down the opponents’ attack.

Secondary responsibilities include eliminating the opponents’ advantage of moving forward quickly and allowing the midfielders and forwards to help on defense.

To accomplish these objectives, defenders must work to force the opponents and the ball to the outside of the field.

Defenders need to anticipate passes to opponents and step up to intercept passes.

Do not allow opponents to turn. For example, when an opponent receives the ball and his/her back is still to the goal, don’t allow the opponent to turn to a position where they can see goal and can shoot.

Defenders need to control balls they receive and carry (dribble) them upfield.

Clear and pass balls to midfielders and forwards (go to outside – not middle of field).

Defenders should follow the ball upfield, staying one pass behind the midfielders, available for a back pass and in position to return a loose ball to the midfielders and forwards. (called “push up” or “move up”)

On goal kicks, defenders should stay goal side of opponents, protecting against short kicks.

Responsibilities Of A Midfielder

Need to help on defense and on offense.

Have to control the space between our defenders and our forwards.

Midfielders have to receive the ball from defenders, carry it up the field, make a good pass or a through pass to the forwards (midfielders must learn when forwards are offside), or go straight to goal.

Need to receive the ball from the defenders or take it away from the other team, and learn to cross the ball to the other side of the field to the other midfielder or the far forward.

Midfielders have to be one pass away from the other midfielder, to provide support.

Midfielders need to follow forwards, stay one pass behind forwards, and intercept clearing kicks by other team’s defenders.

Need to get back to help defenders, especially on corner kicks and situations when other team has greater numbers.

Midfielders take throw-ins in offensive half or at least offensive third of the field (coach’s preference).

Responsibilities Of A Forward

Forwards are goal scorers. Forwards are our front line of attack, our main offensive players.

Forwards need to go back when we are on defense, to stay close to the midfielders and defenders, but do not usually go all the way back.

Forwards need to go back far enough that the midfielders can pass the ball to them.

Forwards need to learn to stay onside (not offside).

Forwards come back into defensive side of field to help pick-up cleared balls, get goal kicks, receive clearance passes from teammates.