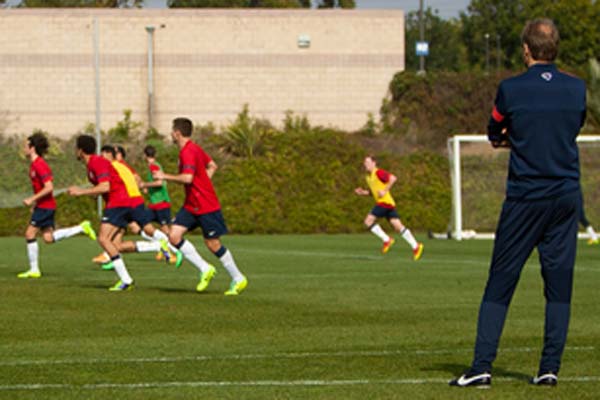 The US Soccer Federation offers coaching education classes at every level for soccer coaches in the United States. A recent revamp changed the scope of coaching licenses, dividing between grassroots and professional. This replaces the old National Youth and E license courses, with several of the grassroots courses offered online. It also requires signing up online for US Soccer’s Learning Center.

Candidates take two in-person courses over two months along with what US Soccer calls “assignments and mentoring.” The first class is three days and the second class is two days. These classes may or may not require travel depending on your location. The focus is on training sessions for small-sided and full-sized drills and what US Soccer calls the Six Tasks of a Coach:

This two-to-three month course requires the holder to have had a D License for a minimum of 12 months and be currently coaching. Two five-day classes are separated by six-to-eight weeks of assignments and mentoring. The C License teaches what US Soccer calls the core concepts of coaching. US Soccer has a waiver process for qualified coaches holding foreign licenses and former topflight professional players handled through the organization hosting the C License course. If you don’t already have the D License and meet the other criteria, contact the host of the C License course you’re interested in to see if you qualify for a waiver. The C License costs between $1,000 – $2,000.

This four-to-five month course stresses player and team development. There are three five-day courses separated by six-to-eight weeks of assignments and mentoring conducted with 11v11 teams. Candidates need to have had the D License for a year, have three or more years coaching experience, currently coaching with access to 11v11 training. The waiver procedure for the B License requires the equivalent of a UEFA B License or five years playing topflight soccer. The B License costs $3,000.

US Soccer divides the A License between youth and senior soccer. The A-Youth license focuses on developing the future professional soccer player. It’s a five-to-six month commitment with three five-day classes separated by six-to-eight weeks of assignments and mentoring and a final assessment meeting. Candidates need to have had the B License for six-months, four years of coaching experience, currently coaching, and access to an elite youth club. The A-Youth License costs $3,000.

The A-Senior License focuses on coaching a team at a high level. It’s a five-to-six month course with the same three five-day classes separated by six-to-eight weeks of assignments and mentoring and a final assessment meeting as the youth license. The differences are access to a college soccer or minor league club and an application submitted through US Soccer’s coaching portal. The A-Senior License costs $4,000.

Following the lead of UEFA, US Soccer adopted a pro license for the top level coaches. It’s now a requirement for MLS head coaches that don’t qualify for a waiver. US Soccer requires holders of the UEFA Pro License to take the USSF Pro License as well. To qualify to take the course, a coach must be actively coaching in MLS, NWSL, USL, or on the US National Team staff. The course takes 12 months with a five-day class, a six-day onsite visit to the coach’s club by a USSF instructor, a six-day international class, a four-day class, a second developmental period, and a final presentation as part of a four-day class. The Pro License costs $10,000.