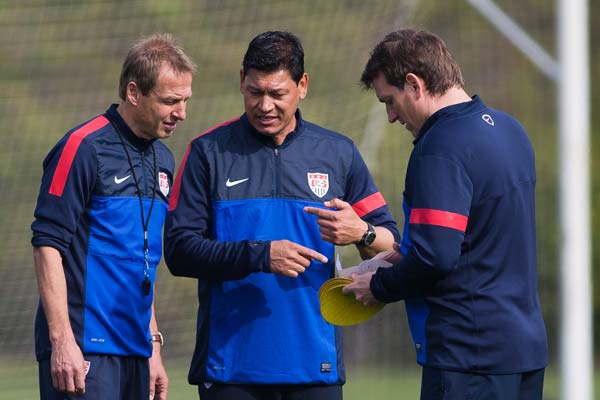 As a coach, you may want to ask one of your parents or your assistant coaches to keep stats for you during the game. This way, you can keep track of how many shots or goals you got off against a particular team, how different players are faring in different positions, and how your goalkeeper matches up to the opposing goalkeeper. Keeping stats in a soccer game is not too difficult– the main place you have to keep your eye focused and your mind ready is at the goal, when players are taking shots and goalkeepers are making saves.

A good idea is to have a clipboard, and a sheet with a diagram of a blank soccer field as well as an area for notes. Your stat keeper should have a stopwatch, and should start the watch with the start of each half.

As the game progresses, the stat keeper should note all shots, all goals, all assists, all saves by the goalkeeper, and all defensive blocks. Mark on the field diagram where the shot took place from the field. Mark the shot with an open circle if the shot did not result in a goal, and mark it with an x if it did result in a goal. Then, write down in the notes area the time and name of the player who took the shot.

Another idea is to write the number of the player who took the shot on the field diagram instead of marking open circles or x’s. When the goalkeeper makes saves, write down the time in the notes area, followed by “GK Save,” or whatever helps you remember. You may or may not choose to keep track of stats for the opposing team as well as your own– this can get complicated. Another good idea is to record times and types of fouls, including the result (direct kick, indirect kick, etc.).

Keep in mind the following definitions of shots, goals, assists, and saves:

Goals: An attacking player that touches the ball into the goal is credited with a goal.

Assist: An assist is credited to a pass leading directly to a goal. No more than two (2) assists can be credited to any one scoring play. If a scoring play consists of two consecutive passes without a defender touching the ball in between, two assists may be credited. No assist is awarded if a player gains control from the opposing team and scores, if it is on a penalty-kick goal, or if it is on an “own goal”. A deflected or rebound shot, whether off the post or crossbar or not, is not considered an assist.

Save: A goalkeeper is awarded a save when he or she prevents a shot from entering the goal. A goalkeeper who intercepts a cross or long pass is not credited with a save.

Shutout: Shutouts are awarded to goalkeepers who have not been scored upon for the entire game. If two or more goalkeepers participate in a contest where no goals are allowed, do not credit a goalkeeper with a shutout. Goalkeepers on the same team can “split” shootouts, if they play at least one half of the game.

Goals and saves occurring in shootouts after overtime play are not recorded in statistics.

Chris Armas takes over at Toronto FC with the club looking for its next Designated Player and figuring out how to stay in contention.