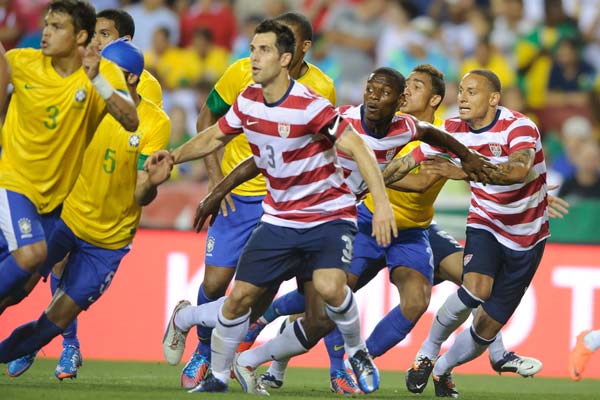 There are many components to good team defense as well as to individual defensive skills.  As soon as the opponent gains possession of the ball, the team is on defense, and the defenders must be especially aware and prepared as an offensive attack approaches their own goal.

After a transition (one team switching to offense while another switches to defense) the first responsibility of the defense is to get between the ball and the goal.  If possible, the defenders should try to win the ball back.  In this attempt, they must weigh the benefit of regaining possession against the risk of losing position altogether and being beaten to the goal.  If a defensive player is patient and remains on his feet between the opponent and the goal, the offensive team must slow down.

The defense should also concentrate on remaining compact (keeping less distance between the front defenders and the rear defenders).  If there is grater pressure on the attacker with the ball, the defense can afford to become more compact, because there is less chance of a long ball being played over the top of the defense.

Defensive concentration refers to defensive formation changes as the ball gets closer to the goal.  As the attackers approach the goal, the players should ‘pinch in,’ especially on the weak side.  This helps prevent a penetrating pass by the offense.  The gaps between defenders should be smaller than those between the attackers.

Defensive balance refers to the line of defenders relative to the line of attackers.  Each defender should have a ‘man’ he is marking or defending.  Because of these responsibilities, the players cannot stand weighted to one side of the field.  The defenders should be spread across the mouth of the goal (keeping defensive depth in mind) in positions where they can either 1)step up to challenge their ‘mark’ if the mark receives a pass or 2) step up to another attacker if this attacker has beaten one of the other defenders (his ‘mark’).

If the first defender uses his body and feet to contain the attacker, he gains time for the other defenders to put all the tactics of good team defense into play—balance, depth, etc.  Then, if the first attacker is isolated, the first defender can force him close to the second defender, who can then execute a tackle.  If a successful pass is made by the attacker to another attacker, the second defender then becomes the first defender.  Third defenders always remain compact and limit the space available for other attackers to work in.  The goalkeeper works from behind to direct the defense and make the defenders aware of what may be happening on the other side of the field.