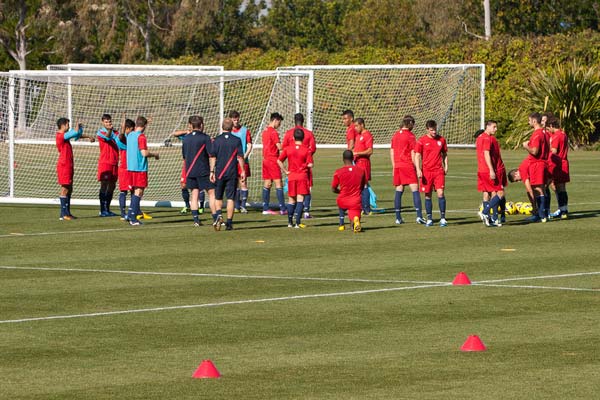 Transition means switching from offense to defense and back again. To defend against the breakaway, teams must be prepared to face an attacking opponent with fewer than optimal numbers. Sometimes, only the goalkeeper is left in the sole line of defense against two or three opponents dashing towards the goal. Your team must practice defending with numbers down to better prepare for coming up against a breakaway.

Build Up - Numbers Down

One good drill that emphasizes transition, defense, and attack is called ‘Build Up - Numbers Down,’ developed by the Women's coaching staff at the University of North Carolina. You will need 8 or more players, one ball, four cones, and vests for four players (or more vests if playing with more players). Create a playing grid, at least 20 x 30 yards, making a one-yard length goal at each end with the cones. Create two teams of even numbers. One team wears vests. The play starts with one player from each team on the field. These players will go one v. one until a goal is scored.

Each time a goal is scored, add a player to one of the teams on the field. (It is most effective to add a player to the side that lost the previous round, forcing the opponent to defend a ‘man-down,’ thereby switching the team’s roles). When all players are out on the field, each time a goal is scored, take away a player. The team that gets its players off the field first is the ‘winner.’

A variation on the game is to use points rather than which team gets its players off first to determine the winner:

2 point: goal with numbers even

3 points: goal with numbers down

To emphasize defense rather than attacking for winning, use a points system that gives points to the defense, assuming that the team with the most points loses.

2 points: opponent scores with numbers even