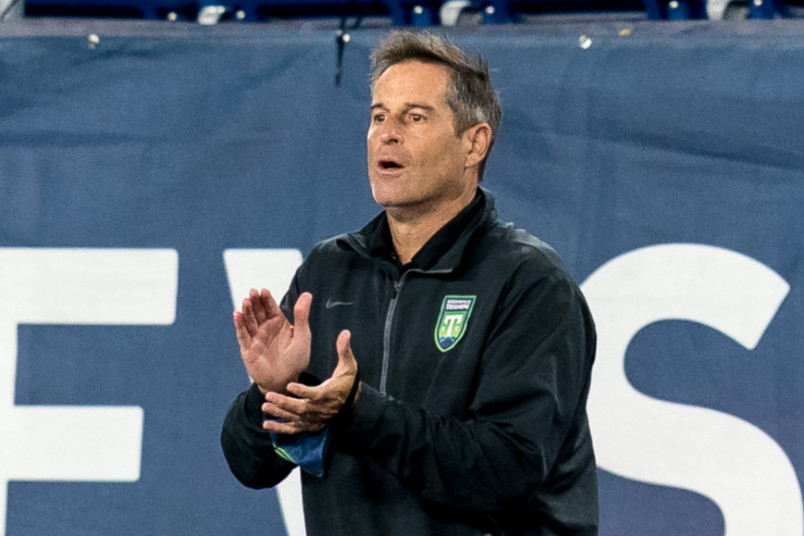 By Jason Davis – WASHINGTON, DC (July 20, 2022) US Soccer Players – Now in its fourth season, Greenville Triumph operates as an example of the growth of the game in all parts of the United States, not just the bigger markets. Already, their story is part of a broader narrative that’s so important to the future of the game in this country. Greenville’s record on the field speaks for itself, reaching the USL League One final in every campaign and helping to establish a new club in a new league in just a few seasons.

In its first season in 2019, Greenville finished as runner-up to champion North Texas SC in the debut season of USL League One. In 2020, they finished the regular season at the top of the table, crowned champions when a COVID-19 outbreak forced the cancellation of the final. In 2021, Triumph beat the Chattanooga Red Wolves in the playoff semifinal before losing to Union Omaha in the championship game.

All signs point to another successful season in South Carolina. Greenville is currently in 1st-place in the League One standings, primed to make the playoffs for the fourth straight season. The quest for another final appearance and the club’s first championship game victory is on.

Head coach and sporting director John Harkes is a significant reason why Greenville has started life so strongly in USL League One. The National Soccer Hall of Famer knows that clubs need consistency and commitment to succeed.

“I’m very passionate about growing the game in our country,” Harkes said in an interview with USSoccerPlayers.com. “With Greenville and the ownership group, it’s been a great journey to get where we are. We’re in year four and trying to grow the league…. So you pursue everyday growth and you make sure that people don’t lose their way because it’s hard. It’s a lot of hard work. You roll up your sleeves.”

Harkes sees Greenville as part of a new wave of clubs that are giving chances to young players to play professionally.

“We want to make sure that we are doing the right thing to create that platform for players,” he said. “I mean, that’s what it’s about. We want to give them the opportunity to be pros.”

The club, the league, and the experience are also changing Harkes, per his own admission.

“Am I a different coach? Absolutely,” he said. “I am more experienced, more comfortable in my decision-making process. Easier communication. Knowing what you want on a daily basis. Being organized and having a plan and a structure and having a plan A, B, and C to fall back on. I think that’s where you want to be as a coach. You want to be a coach that can be flexible to play against so many different styles of play.”

“Through the experience, you grow as a coach and you grow as a person in terms of self-reflection,” Harkes said. “How can I be better and how can the club be better? How can the team be better? You’re looking for excellence. You’re looking to elevate the expectations of both the fans and the club. I’m always trying to push my club a little bit to do different things. And I think it’s healthy to do that, ask the right questions and prod a little bit just as we try to do that with the league.”

What Harkes describes is part of the story of American soccer’s growth. He’s one of many former USMNT players still working in the game, “giving back” as Harkes terms it.

“I think it’s important for former players to kind of take up different roles, various roles in terms of the growth of the game. And you see that across the country, which is excellent,” he said.

“It’s been a joy,” Harkes concluded. “It’s been a lot of work. But I love it. I love my work. I guess I’m fortunate, really fortunate to be in this position that I can coach and be able to be a small part of the growth of soccer.”