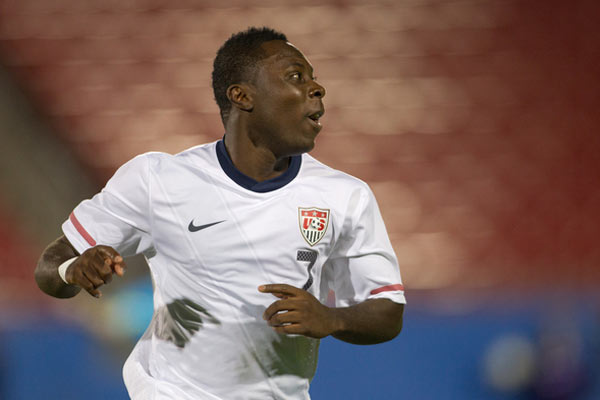 Freddy Adu’s performance in the 2007 Under-20 World Cup was one of the best in the tournament, leading the US to the knockout stages and earning him a contract with Benfica in Portugal’s first division.  Adu has the poise and maturity of a true professional to go along with his blazing speed, dazzling skills on the ball and hard left-footed shot.

Arriving in the US from Ghana at 8, Adu was soon dominating in the youth soccer scene of suburban Maryland. That drew the attention of the US Soccer Federation developmental program. Adu joined the US Soccer residency program at 13, moving to Bradenton, Florida.

He was a key part of the US squad for the 2003 U-17 Championships where the US would lose to Brazil in the quarterfinals, and the World Youth Championships were the US would finish 5th. As a 14 year-old, Adu bettered Bobby Convey and Santino Quaranta as the youngest player ever to sign with Major League Soccer. He won MLS Cup with DC United in 2004.

On December 11, 2006, Adu was traded to Real Salt Lake, where he reunited with former US U-17 National Team head coach John Ellinger. At RSL, Adu will have the opportunity to be a regular starter and to play in the center of the midfield, which is what he believes is his most natural position.

With the shake-up at RSL and his U-20 World Cup showing, Adu finally made his expected move to Europe, signing with Benfica for the 2007-08 season. He returned to MLS in 2011 as a member of the Philadelphia Union. He spent the 2013 season with Bahia in Brazil before signing with FK Jagodina for the 2014-15 season. Signed with KuPS in Finland in 2015 and joined Tampa Bay that summer. Adu joined the Las Vegas Lights for the 2018 USL season. In October, 2020 he joined Swedish club Osterlen.

2011: Called into camp for the Gold Cup and came on as a second-half substitute in the semifinal game against Panama. Started in the final against Mexico.
2009: Played in the June 3rd Qualifier away to Costa Rica.
2008: Came on as a second half substitute in 2-2 exhibition tie with Mexico February 6 for third senior cap. Scored his first goal with the senior side on Nov 19th against Guatemala.
2007: Captained the United States Under-20 squad in the U-17 World Cup, including the shock 5-1 win over Poland and beating Brazil on national cable television. Made late sub appearance for senior team in October 1-0 win in Switzerland, then made first start in 1-0 win in South Africa November 17.
2006: Made his debut for the US National Team on January 22 in the 81st minute of a scoreless tie against Canada. His appearance came after spending three weeks with Bruce Arena’s side in a training camp in Carson, Calif.
2005: Adu made four appearances for the U-20 U.S. Men’s National Team at the FIFA World Youth Championships, helping the team to the round-of-16. In all, he made nine appearances (seven starts) and contributed three goals and an assist in all competitions in 2005.
2004: Adu made several appearances with the U.S. U-20 National Team, including a 1-0 victory over Haiti and a 2-0 loss to the reigning U-20 World champs, Brazil.
2003: Adu played with the U.S. U-17 National Team in 2003 and helped the side qualify for the FIFA U-17 World Cup with a goal and an assist in a pair of 3-0 wins over Jamaica and Guatemala in March. He opened the tournament with a spectacular performance, notching a hat trick in the team’s 6-1 win over South Korea. Three days later, he scored the game-winning goal in the 89th minute in a 2-1 victory over Sierra Leone, vaulting the U.S. team into the quarterfinals, where they would fall to eventual champions Brazil. Adu was called up to the U.S. U-20 National Team on 11/19 to replace injured forward Arturo Alvarez on the squad that participated in the FIFA World Youth Championships in the United Arab Emirates during November and December. He helped the U.S. to a fifth-place finish in the tournament, appearing in five games (starting four). Adu recorded an assist in the team’s 2-1 quarterfinal loss to Argentina.
2002: Adu joined the U.S. U-17 residency program in Bradenton, FL in January of 2002. He finished second on the team in scoring in 2002 as a 13-year-old, netting 22 goals.

2020: Signed with Swedish second division club Osterlen in October.
2018: Signed with the USL’s Las Vegas Lights.
2016: With Tampa in the NASL.
2015: Joined KuPS in Finland through July. Signed with Tampa Bay in the NASL in time for the Fall season.
2014: Trained with AZ Alkmaar in the summer. Signed with Serbian club FK Jagodina.
2013: Transferred to Bahia in Brazil’s topflight.  Finished his Philadelphia career with seven goals in 35 appearances.
2012: Member of the Philadelphia Union, finishing out of the playoffs.
2010-11: Joined Turkish second division club Rizespor on loan at the end of January, 2011. Rizespor made the Turkish playoffs, but didn’t win promotion.  Adu joined the Philadelphia Union in August of 2011.
2009-10: Started the season on loan to Belenenses in the Portuguese Liga. Moved to Aris in the Greek League on loan during the January window.
2008: Spent a season-long loan with Monaco of France’s Ligue 1.
2007: Left RSL for Benfica. Scored a handful of goals coming off the bench, but still failed to gain significant playing time in early part of the 2007-08 season, despite Benfica’s struggles to score and keep pace with runaway leaders Porto.
2006: After scoring two goals and registering eight assists in 32 games for D.C. United, Adu was traded to Real Salt Lake on December 11, 2006, along with Nick Rimando for a major allocation and Jay Nolly.
2005: Despite missing a number of games due to his time with the U-20 U.S. National Team at the FIFA Youth World Championships, Adu was impressive in his second MLS season. Adu, who spent time both in the midfield and at forward, scored four goals and dished out six helpers in 25 games (16 starts). He tied for the team lead (w. Gomez) with three game-winning goals, while notching two game-winning assists. He was twice named the Honda MLS Player of the Week – first, in Week 6, when he notched a goal and tallied two assists in D.C.’s 3-1 win over the Columbus Crew and second, in week 28, when he had a goal and an assist in the team’s 3-1 win over Real Salt Lake. His Week 6 honor made him the youngest player to ever the award, and the first teenager since 2001.
2004: As a rookie, Adu was one of two D.C. United players to see time in every match during the 2004 campaign. Comfortable in either the forward or attacking midfield role, Adu became the youngest player ever to appear in a Major League Soccer match on 4/3 (14 years, 306 days) and became the youngest player ever to score a goal in League play on 4/17 (14 years, 320 days). He was also named a commissioner’s pick to the 2004 Sierra Mist All-Star Game and continued to improve throughout the year, tallying a total of five goals and three assists. The phenom scored his first game-winning goal by providing the sole tally in a 1-0 victory over the MetroStars at Giants Stadium on 10/2. After signing a multi-year deal with MLS on 11/18/03, Adu was selected by D.C United as the first overall pick of the 2004 MLS SuperDraft on 1/16. United acquired the first draft pick by trading future considerations to FC Dallas.