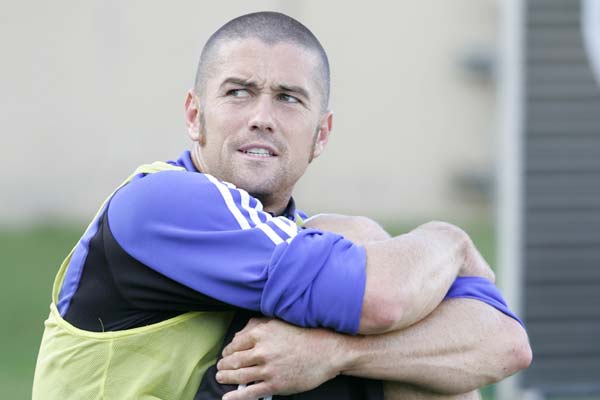 Wade Barrett played an integral part of the Houston Dynamo defense in the mid 2000s, leading the team to an MLS Cup victory in 2006 in its first year after moving from San Jose, and then repeating the feat in 2007 to bring his career total to three.  He was the inspirational team captain and left back who loved to roam down the flank. In early 2007, he added a second USMNT cap following his debut in 2002.

Before re-joining MLS at the Quakes in 2005, he played two seasons in Europe at Danish SuperLiga side Aarhus (31 appearances), and went to Norway’s Fredrikstad for a short loan spell that lasted eight games.

Barrett retired as a member of the Dynamo following the 2009 season. He is currently an assistant coach with Houston.

2007: Came on as second half sub in friendly against Guatemala.
2004: Called into camp for WC qualifier against Costa Rica, but suffered hamstring injury in training.
2003: Called into national team training camp.
2002: Earned his first career cap in 2-0 win over El Salvador at RFK Stadium.
2001: Called into National Team training camp before friendly with Korea.

2009: Limited to 12 games due to injury, retiring before the start of the 2010 season.
2008: Played in 26 games.
2007: Started all 34 regular season and playoff games as he again captained Houston to MLS Cup victory over New England.
2006: Captained Houston Dynamo to MLS Cup. Started 35 games in total, registered three assists.
2005: Returned to Quakes. Played and started 32 games, scoring once, assisting twice.
2004: Signed a six-month contract with  the Norwegian Premier Club Fredrikstad Football Club on loan from Aarhus.
2003: Signed a two and half year contract with  Danish team AGF Aarhus and played 19 games in the 2003/04 season.
2002: Named to MLS Best XI and nominated for Defender of the Year award
2002: Emerged as one of the top left backs in the MLS starting all 28 games for the  Earthquakes.
2001: Returned to form to score a goal and six assists in 24  games as he helped the Earthquakes to their first MLS Cup.
2000: Played just three games due to groin injury and hernia surgery.
1999: Led the Earthquakes in minutes played starting 31 of 32 games.
1998: Started 22 of 26 games as a rookie and scored his first professional goal against New England  on May 3.

Youth and college: Scored four goals in three games with Under-20 team during CONCACAF tournament in Honduras in 1994. Had 38 goals and 26 assists in four years (1994-97) at William & Mary. NSCAA All-American first teamer and Colonial Athletic Association Player of the Year in 1997. Made CAA All-Conference first team all four years. Parade All-American and State Player of the Year at First Colonial High School in Virginia in 1993.