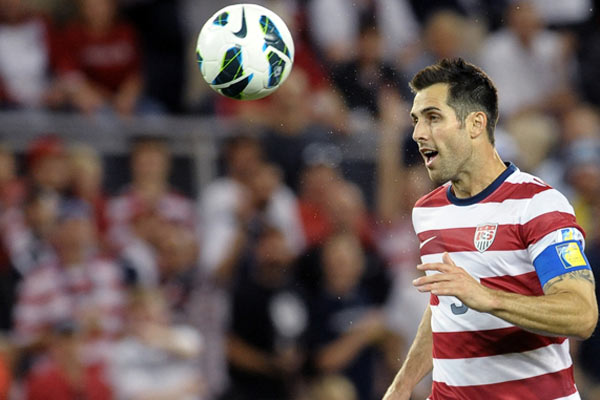 Carlos Bocanegra brings a no-nonsense, battling approach to defense has made him a valued asset in central defense.

After a stellar stint at collegiate power UCLA, Bocanegra was snapped up as the fourth overall choice in the 2000 MLS Superdraft. It didn’t take him long to settle into his role at the Fire and within the sometimes daunting world of professional soccer overall.  Bocanegra was named 2000 Rookie of the Year – no mean feat for a defender in a side loaded with offensive star power.

The defender’s towering stature and blistering speed make him nearly impossible to round on the dribble, and his positional sense sees passing lanes disintegrate practically before they emerge. After being named MLS Defender of the Year in 2002 and 2003, Bocanegra set himself up as a lynchpin in the middle of the USMNT defense.

His move to Fulham in the English Premier League in 2004 helped give Bocanegra the experience that ultimately led to his selection to the 2006 World Cup team and provided him the background for being one of the better players for Bruce Arena in Germany.

A regular with Fulham for several seasons, Bocanegra moved to Rennes in France’s Ligue 1 after the 2007-08 Premier League season.  He was transferred to Saint-Etienne on July 16th, 2010.  On Aug 17th, 2011, he completed a move to Rangers. He made 40 appearances and scored three times with Rangers prior to the club’s administrative relegation to the Third Division. Bocanegra spent the 2012-13 season on loan to Racing Santander, leaving Rangers in June 2013. He officially returned to MLS as a member of Chivas USA on Jul 1, 2013. Bocanegra retired at the end of the 2014 MLS season. He took the technical director job with MLS’s Atlanta expansion team in March, 2015. On September 8, 2020, Bocanegra won election to the National Soccer Hall of Fame.

2012: Started against Italy on Feb 29th. Earned his 100th cap against Brazil on May 30th. Scored in the World Cup Qualifier against Antigua and Barbuda on June 8th. Started against Jamaica on Sept 11th. Scored against Guatemala on Oct 16th.
2011: Started against Argentina on March 26th and every game in the 2011 Gold Cup. Earned his 100th cap against Slovenia on November 15th.
2010: Scored against Holland on March 3rd. Named to the US World Cup squad. Played in all four games for the USA in South Africa.
2009: Captained the US against Mexico on Feb 11th and started the June World Cup Qualifiers.  Had the winning goal against Honduras on June 6th.  Recovered from a hamstring injury in time to play in the semifinals and final of the Confederations Cup. Transitioned to left back, the position he normally plays at club level.  Returned to center back for the November friendlies, starting against Slovakia and Denmark.
2008: Captained team in 2-2 exhibition tie against Mexico in Reliant Stadium, Houston.
2007: Captained US team three times during Gold Cup, including in final win over Mexico. Scored game-winning goal against Panama in quarter-final. Was rested for Copa America.  Scored in 4-2 September exhibition loss to Brazil in Chicago. Captained team in road wins at Switzerland and South Africa.
2006: Made four appearances for the US National Team, including two starts in the World Cup.
2005: A regular in the National Team for qualifiers and friendlies with eight appearances, helping to form the core of the backline in Bruce Arena’s flat back four.
2004: Scored a goal and had three assists. Started five of the US’ eight World Cup Qualifiers.  Made 10 appearances and nine starts overall.
2003: Scored four goals off corner kicks against Canada, Jamaica, Brazil and Costa Rica in 13 appearances for the National Team.
2003: Was the first U.S. defender to score four goals since 1994
2002: Earned praise for solid performance in Gold Cup starting all five games
2001: Earned first national team cap when he was substituted in for Fire teammate Diego Gutierrez on December 9 at South Korea in a 1-0 loss
2000: Was beckoned to the full U.S. national team camp by head coach Bruce Arena in January 2001 prior to World Cup Qualifying.
1999: Was a member of the U.S. under-20 side that reached the second round of the FIFA World Youth Championship.  Also a member of the U.S. under-23 side that brought home the bronze medal from the 1999 Pan American Games, nabbing his first goal as a U-23 international against Canada.
1997: Began his charge toward national prominence as a starter for the U.S. under-18 squad.

2014: Injured for most of the season with Chivas USA, retiring at the end of 2014.
2012-13: Started the season with Rangers in the Third Division, playing in league and cup games before a loan move to Racing Santander in Spain’s second division. A regular with Racing, the club were relegated at the end of the season. Rangers released Bocanegra from his contract in June, 2013. He had 40 appearances and three goals with the club prior to their relegation to Scotland’s Third Division. Bocanegra joined Chivas USA on Jul 1, 2013, playing 12 games.
2011-12: Started the 2011-12 season with St Etienne, but after two weeks he was transferred to Rangers in the Scottish Premier League.
2010-11: A regular with St Etienne, who finished 10th in Ligue 1.
2009-10: In his second season with Rennes, the club finished 9th in Ligue 1.  Bocanegra joined St Etienne during the summer transfer window.
2008-09: Signed with Rennes in France’s Ligue 1.  Made it to the French Cup final.
2007-08: Continued with Fulham, now boasting Kasey Keller and Clint Dempsey as fellow US team-mates in addition to McBride. Was in and out of a struggling side in season’s first half.
2006-07: Was Fulham’s second leading scorer with five goals, behind Brian McBride, despite playing left back. Helped Fulham narrowly escape relegation.
2005-06: After opening the 2005-06 season with a minor knee injury, he assumed a regular role in Fulham’s central defense … Played in 14 of 16 league matches for which he was available in first half of the year
2004-05: Assumed full-time position for Fulham at left back. Scored his first goal for Fulham in a 4-3 loss at Portsmouth on August 30, 2004.<br>
2004: Signed deal to play for English Premier League side Fulham.
2003: Scored a goal and two assists in 19 games leading the Fire to the 2003 MLS Cup title game
2003: Became first player to win MLS Defender of the Year in consecutive seasons.
2002: Won MLS Defender of the Year starting 26 regular season games. Trained for two weeks with Dutch club Feyenoord.
2001: Bocanegra finished his second season with Chicago making 13 starts in 15 appearances despite missing time due to ankle injury.
2000: Chosen by the Chicago Fire as the fourth overall MLS Superdraft pick.  Was named to Soccer America’s MLS Team of the Week three times in 2000, named the Chicago Fire’s 2000 BIC Defender of the Year and won the 2000 Kellogg’s MLS Rookie of the Year.